On a young team, upper classmen’s development just as crucial 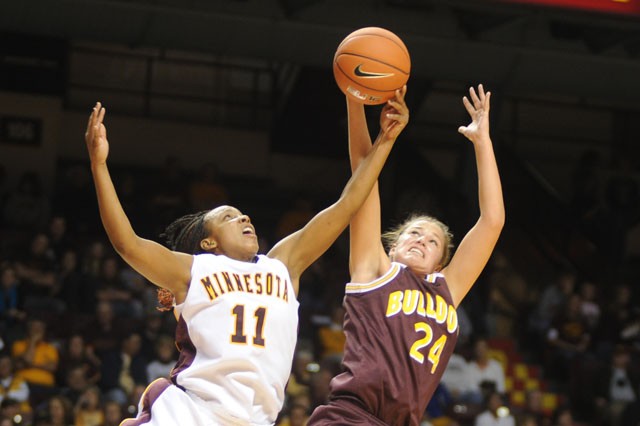 One thing jumps out after a quick look at the womenâÄôs basketball roster: the Gophers are a young team. With just two seniors leading four wide-eyed newcomers, there is obviously some need for the freshmen to grow up quick and contribute right away. But perhaps more important is the development of veterans as they take on bigger roles. Players like Katie Loberg, Brianna Mastey and Leah Cotton should see significant increases in playing time. TheyâÄôre on the right path so far. In the two exhibition victories, head coach Pam Borton said she saw more growth out of the older group than the freshmen. âÄúThose players need just as much experience as the freshmen because they havenâÄôt played a lot,âÄù Borton said. âÄúTheyâÄôre going to have to grow into their roles and grow into what we expect them to produce for our team.âÄù In the first exhibition game against Southwest Minnesota State last Wednesday, Loberg had 17 points and 10 rebounds in just 19 minutes. As a freshman last year, she averaged just two points and three rebounds off the bench. LobergâÄôs presence will be especially important with the graduation of three members of the front court. âÄúI think my role from last year will be changing significantly,âÄù Loberg said. âÄúIâÄôm looking forward to that and IâÄôm really ready to embrace that.âÄù While Loberg, who started in both exhibition games, added another 10 points in the GophersâÄô blowout win over Minnesota-Crookston, Mastey and Cotton combined for 30 points. Cotton, a sophomore, had 16 points off the bench, with 10 of them coming from the free-throw line. Last season she averaged only 3.4 points and less than 10 minutes per game. CottonâÄôs been working on her defense, which she identifies as her main weakness last season, and expects to inject some energy into the rest of the team. âÄúWhether IâÄôm coming off the bench or not, IâÄôm going to try to create a spark,âÄù Cotton said. With the development of many of the returning role players and starters, the Gophers are confident that they have shaken off the cobwebs during the preseason. The wins will start to count this weekend when the Gophers host the Best Buy Classic this weekend at Williams Arena. They will face Northern Illinois in the first game Saturday afternoon, and will face either Wisconsin-Green Bay or George Washington Sunday. The Gophers are feeling more confident in themselves coming out of this yearâÄôs pre-season because, unlike last year, they took care of business and won both exhibition games easily. Last season started with a shocking exhibition loss and ended with the disappointment of a last place Big Ten finish. âÄúWe have something to prove to ourselves, in my opinion,âÄù Cotton said. âÄúLast year we ended with a bitter taste, this season feels fresh.âÄù Gophers sign two highly-touted recruits The Gophers will have locked up two of the most talented players in the country for 2011. Rachel Banham, a guard, and Kayla Hirt, a forward, signed their letters of intent Wednesday, and will represent the GophersâÄô 2011 recruiting class. Banham led Lakeville North to a 32-0 record last season and the Class AAAA championship with 25 points in the title game. She was ranked as the 19th best player in the country by ESPN, and fifth best at her position. Hirt averaged 26 points and 14 rebounds last season for Bemidji and was ranked as the 74th best player in the country and at No. 20 at her position.