The neighborhood took a different approach to fix up graffiti targets. 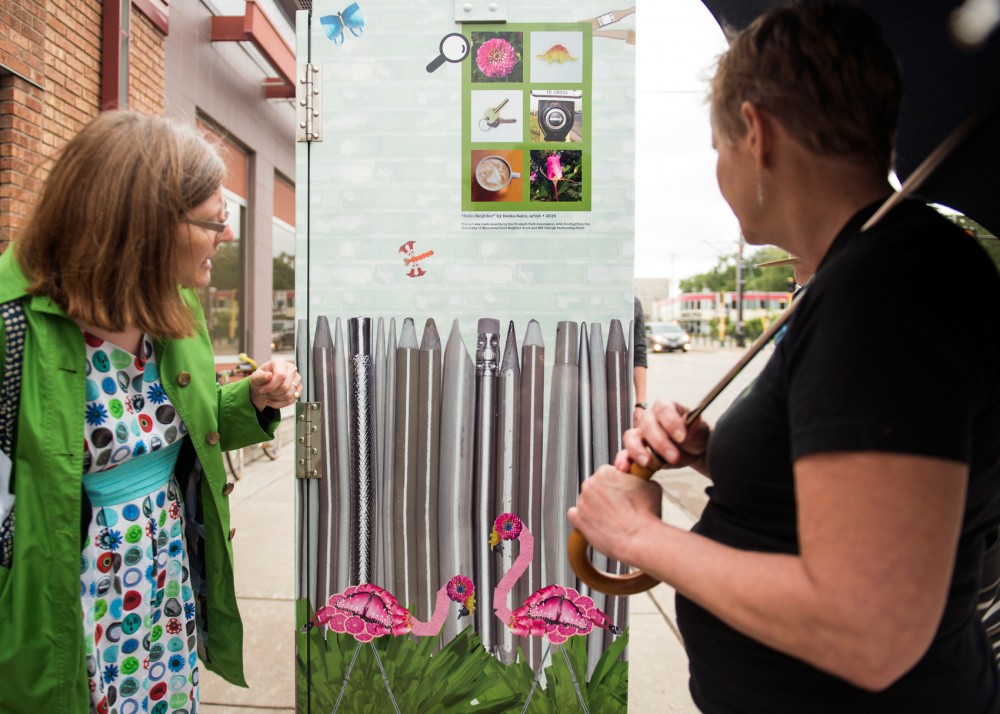 Members of the Prospect Park Association take a tour of utility boxes in the area that have been wrapped in art by local artists. The project was completed in an effort to stop graffiti and bring beauty to the neighborhood.

A project to distinguish the Prospect Park neighborhood from others was showcased on a tour for residents Thursday.

The project, led by the Prospect Park Association, recruited local artists to design artwork to wrap around six utility boxes in the area to help discourage graffiti. The tour brought a group of neighborhood residents along University Avenue to display the final product.

Tamara Johnson, a PPA board member, said the project started in early 2015 when the Good Neighbor Fund opened its grant process, following similar efforts in the Marcy-Holmes and Southeast Como neighborhoods.

“The utility boxes invite graffiti, and putting art on them would discourage such actions,” Johnson said on the tour.

She said she wanted local artists to work on the project instead of using art pre-approved by the city.

“The artist needs to have a connection to the neighborhood. … They must live here or work here,” Johnson said.

After $12,500 from the GNF was granted, PPA put out a call for artists in the neighborhood, and after receiving 14 different proposals, the association selected artist Becka Rahn.

Rahn, who works in textile design and fabrics, said she saw similar projects around the city and thought working on one would be a unique experience.

She said she tried to make art that reflected her relationship to the Prospect Park community.

The photographs were scanned and combined to create designs and pictures, like a blue jay and a squirrel, she said.

Each box also shows the individual photos separate from the collage so people can see what made up the design, she said.

Johnson said she wanted one artist working on the project to give residents and passers by a sense of place and continuity across the boxes.

The entire project took about a year to complete, Johnson said. That time was mostly spent finding an artist, getting permits for the utility boxes and approving the art with the city, she said.

Richard Adams, PPA board member and longtime neighborhood resident, said the art improves the streets of the neighborhood. The artwork allows people to engage with the neighborhood while in the area, he said, and it’s something residents can be proud of.

Rahn said she plans to bring students from a local Montessori school on a scavenger hunt to find the pictures on boxes and see how they were used to create the designs.

Lydia McAnerney, a Prospect Park resident, said the project distinguishes the neighborhood’s look from others areas.

These utility boxes can make people stop and notice their surroundings, she said.

The utility box art project is one of many identity projects PPA is working on. Recently, PPA passed bylaw changes to reduce its board size and reserve two seats for a student and business representative. Additionally, there are plans to place banners on lampposts in Prospect Park to create a sense of place for newcomers.