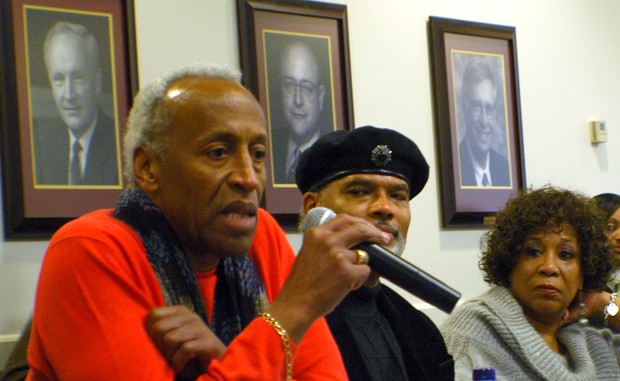 John Wright and Marie Braddock Williams look on while Lester Cannon reflects the legacy of their actions during the takeover of Morrill Hall in 1969. Participants at the round-table discussion Saturday also included members of The Way organization during 1969, community activists and current U of M students.

Forty years ago, the University of Minnesota campus was plagued with discrimination and inequality like the rest of the country, until several black students led a protest to fight for their right to be heard and voice their opinions to then-President Malcolm Moos. Today, the African-American and African Studies Department, which was formed as a result of the Morrill Hall takeover, is still running. Around 60 people, including professors and former participants âÄî but few current students âÄî celebrated the departmentâÄôs 40th anniversary Saturday. On Jan. 14, 1969 , just over 70 University students took over Morrill Hall, where the campus administration is housed, and presented a list of demands, including full scholarships for black high school students, the establishment of guidance and counseling for black students and the request for more black faculty. Ray Hawes , who was a student-athlete at the time, recalled the Morrill Hall event and explained how he and about eight of his teammates on the Gophers football team had been threatened with suffering severe consequences if caught in any photographs from the event indicating their involvement. “We would have forfeited our scholarships and be kicked off the team,” Hawes said. “My heart was right there, and I wanted to stay.” Eventually, Hawes and his teammates left the scene, but others, like Steve Winfield , a baseball player at the time, stayed for the whole event and his scholarship was revoked. Since fall semester, the African-American and African Studies Department has been planning anniversary events. In November, Minneapolis middle school students researched the takeover. At SaturdayâÄôs roundtable discussion, the students presented their video project: a recap of the 1969 events with reflections from takeover participants and current University professors and students. Dr. Horace Huntley , who was at the forefront for much of the takeover, shared his experiences with the group at the discussion. “We were not going to budge until we got what we demanded,” he said. African-American and African studies professor Rose Brewer said although thereâÄôs been progress, there is still work to be done. “Forty years, we’re still here. Faculty is growing, classes are filling. We’re doing something right,” she said. Originally, the department had mapped out a series of events to honor its anniversary, but due to a lack of funding, much of the ideas were set back. Department Director Walt Jacobs said he was expecting financial help from the University as well as community members and local corporations, but said he thought economic stress was the main reason why contributions didnâÄôt come through. Still, Jacobs said he was optimistic about future endeavors. In light of the lack of finance, the department is working on two new scholarship programs: the Rachel Tilson Racial Justice Fund and the John Wright Scholarship Fund for students studying abroad. An additional anniversary celebration at Eastcliff âÄî University President Bob BruininksâÄô official residence âÄî is also being planned for this fall, pending funding.