Stillwater duo brings chemistry to the U 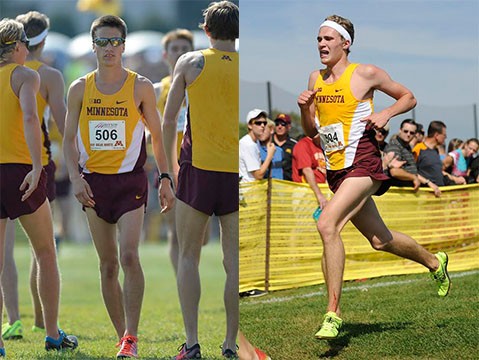 To be successful, a dynamic duo must carry a few attributes — chemistry, longevity and a catchy nickname.

Redshirt freshmen Eric Colvin and Wayde Hall are no exception.

Originating as partners in crime on the Stillwater High School cross country team, the seemingly inseparable teammates have continued their running careers at Minnesota.

“Obviously, one person has to do better in the race,” Colvin said. “But usually we know each other well enough [that we] have to be humble around each other, but we don’t hold any hard feelings.”

Teammates of the duo, including their roommate, fellow redshirt freshman Brad Woodford, said the two have great chemistry and understand each other.

“They just key off of each other so well. They always know what each other [is] thinking, and they work really well together,” Woodford said.

“I think those guys know each other so well from high school. What I see is harmony between them,” Plasencia said.

And like any great chemistry-filled pair, a catchy nickname is an integral part to its success.

“It came from this rapper that we made up one time called DJ Salmon, and guys thought it was funny,” Hall said.

Some other notable nicknames given to the pair are: “Meat and Potatoes,” “Thunder and Lightning” and “the Ponies” due to their high school alma mater, the Stillwater Ponies.

But for many duos, there is a sidekick to the main hero.

But Hall said Colvin doesn’t fit the name of a sidekick.

“I think you could call me ‘Batman’ and you could almost call Eric ‘Catwoman,’” Hall said.

Though the two love pranking other people and goofing around, Colvin said the bond and chemistry they share helps them train for the season.

“We kind of get each other. … We know how to pick [each other] up,” Colvin said. “It helps having somebody on the team that gets where you came from. … [We] push each other in the workouts.”

Colvin said the duo recently evaluated their performance this season.

“We sat down and said we’re going to get back out there and work together and push each other,” Colvin said. “We respect each other and want to compete against each other again.”

Hall said he hopes the two can continue to get better, while still maintaining the competitive nature between one another.

“We’re really happy for each other all the time, but it makes you want to get on the same level. We both want to be succeeding simultaneously,” Hall said. “When we’re both running well at the same time, it’s probably the best feeling.”