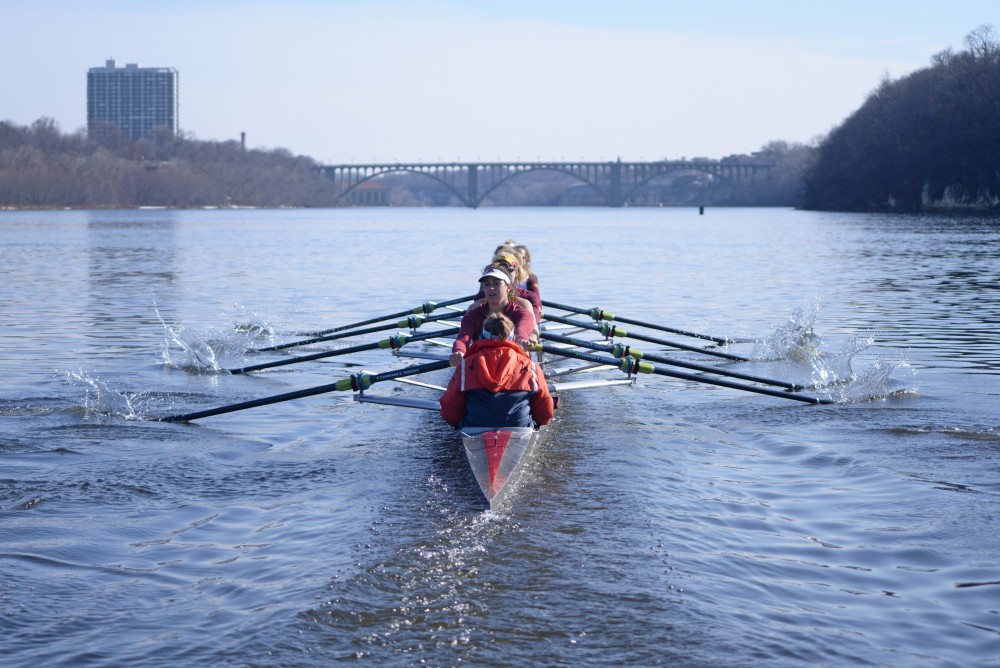 The University of Minnesota rowing team practices on Tuesday, March 27 on the Mississippi River.

During her sophomore year, Kortney Luedloff had no intention or commitment to become a prominent women’s rower for the University.

Walking around on campus one day, Luedloff was looking for ways to get involved and to meet new people.

Now a senior, Luedloff was recruited her sophomore year while she was walking down the street looking for student organizations to join. The freshman coach spotted Luedloff, due to the athletic build she had acquired in her years as a cross country runner.

Rowing became exactly what she was searching for.

The high school cross country runner had lettered three out of her four years while attending Waconia High school. She graduated as Valedictorian and embarked on her rowing career while attending the University of Minnesota.

Throughout the captain’s rowing career at the University of Minnesota, Luedloff has claimed an Academic All-Big Ten Selection both sophomore and junior year as she heads into her senior year.

“I’ve looked up to Kortney for a long time,” varsity rower Bee Lovick said. “Ever since she got to varsity her sophomore year, she has really been a leader by example. Watching her consistently push for more and push herself, she is constantly pushing her boundaries to be better.”

During her sophomore year of rowing, Luedloff competed with the second varsity eight and earned a pair of first place and a second place finishes.

Luedloff continued to develop her rowing skills as she participated in the first varsity eight in all of the spring invitationals.

As one of the six seniors on the Gophers’ rowing team, Luedloff looks to leave an impact on not only the current women’s rowing team, but Minnesota’s entire program. Luedloff and her team have two more events in the 2017-2018 season.

“What I have really worked on all year is setting up a team, a culture, a group that everyone is really excited to be a part of,” Luedloff said. “ I want them to see that it doesn’t come without hard work, but the sport and program rewards that hard work.”

After the Wisconsin Double Duel was canceled last weekend, Minnesota was lucky enough to gain extra days of practice ahead of the tough matchup in the coming weekend.

The Gophers will head south to Clemson, South Carolina this weekend to participate in their last regular invitational of the season. Last year, Minnesota ended with an 18th place finish out of 21 teams, landing 36 points at the invitational.

“It’s definitely going to be tough. It’s going to be a mix of super fast crews, with a bunch of crews on the bubble of the NCAA’s,” head coach Wendy Davis said. “It will be a nice way to see how we stack up three weeks before the championships.”

The Gophers will travel to Indianapolis in May to improve after last year’s Big Ten Championship. Minnesota landed a seventh place finish out of eight teams, claiming 54 points compared to first place Ohio State’s 180 points.