Adding to the buzz of the weekend, six-time All-American Hassan Mead returned, albeit unofficially, to racing. 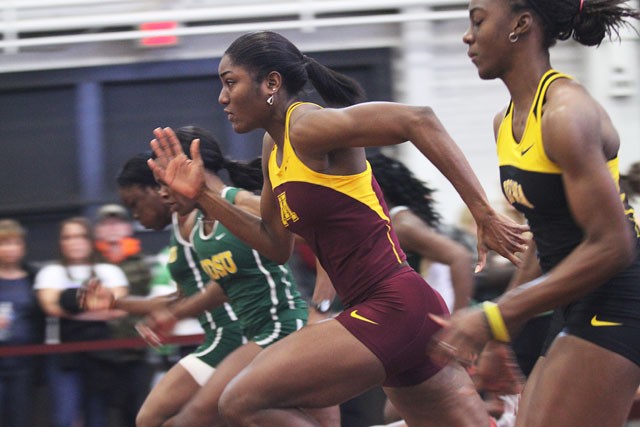 Sophomore Nyoka Giles competes in the women’s 60 meter race on Saturday at the UMN Fieldhouse.

In a weekend highlighted by 11 individual titles and the unofficial return of All-American Hassan Mead, the Gophers dominated the Jack Johnson Classic from start to finish.

Chimerem Okoroji set a Jack Johnson Classic all-time record for the 60-meter dash in the preliminary round before winning the outright title in the finals.

Mike Torchia won the mile in come-from-behind fashion and Harun Abda won the 600-meter title. Abda, a true sophomore, is the defending Big Ten indoor champion in the event.

The third middle distance champion was Nick Hutton, who rode a late charge to take first in the 800.

While the Gophers performed well on the track, perhaps the teamâÄôs biggest strength is its collective balance.

âÄúI think today in a lot of areas we started to come on a little bit to where weâÄôre in striking distance of where weâÄôd like to be later,âÄù menâÄôs head coach Steve Plasencia said. âÄúWe still have time âÄì five weeks âÄì before conference championships, but today we saw a lot more.âÄù

Aside from individual title winners, the biggest buzz in the Fieldhouse was related to six-time All-American Hassan Mead running in the 3,000-meter race. Mead, who hasnâÄôt competed in nearly a year, ran unattached and did not finish, but Plasencia said that was the plan all along.

âÄúWe just kind of kept it a little bit low key,âÄù he said. âÄúI didnâÄôt want to build [his return] up at all.âÄù

Mead, who was âÄòrabbitingâÄô the race (setting a fast pace and dropping out early), arrived relatively unannounced and with little fanfare because he was not listed in the heat sheets and was not technically competing for the Gophers.

Plasencia said he hasnâÄôt made the decision as to whether or not Mead will compete this year, but Mead was all smiles after the race.

âÄúFirst time lacing up the spikes in a long time that I can remember âÄì about a year,âÄù Mead said. âÄúI decided to help some of the guys out in the 3-k.âÄù

–Vikings linebacker Chad Greenway was in attendance Saturday. GreenwayâÄôs wife, Jennifer Capista, was a track and field athlete at Iowa, one of the teams in town for the meet.

–South Florida braved the zero-degree weather to compete over the weekend. Unofficially, it was about 70 degrees when the team stepped onto the plane. Though track athletes almost always prefer competing outdoors, for the Bulls, this might be the exception.