Performing the romantics in turbulent times

The musicians of the Minnesota Orchestra organize their first concert since the departure of music director Osmo Vänskä. 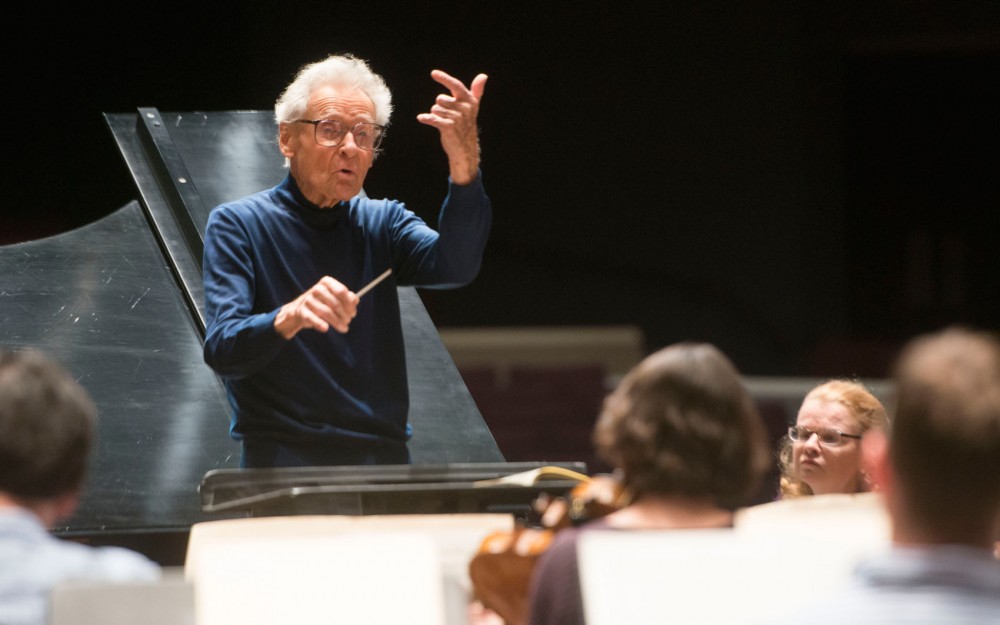 Stanislaw Skrowaczewski conducts the Minnesota Orchestra as they rehearse for an upcoming performance of "Titans of the Romantic Era" at Ted Mann Concert Hall on Wednesday.

The musicians of the Minnesota Orchestra are trained first and foremost to play their instruments. But since their contract negotiations broke down in October 2012 — leaving them without administrative support or even a place to play — they’ve had to learn to do much more.

To prepare for the “Titans of the Romantic Era” performance series this weekend at the University of Minnesota’s Ted Mann Concert Hall, the group sold tickets, booked the venue, managed promotions and made arrangements with collaborative artists. They even recruited renowned conductor Stanislaw Skrowaczewski to lead the performance.

Skrowaczewski has ties to the orchestra stretching back to 1960, when he was appointed music director of what was then the Minneapolis Symphony Orchestra.

In a show of solidarity, Lydia Artymiw, a piano professor at the University, donated her services as soloist for the upcoming concert.

“It’s a sad situation,” she said. “Everyone just wants to go back to concentrating on the music again.”

The lasting toll of the lockout, the longest in the history of professional American orchestras, can be seen in what the orchestra is missing. Over the past year, it’s lost more than a dozen musicians, some to other opportunities. On Oct. 1, its star music director, Finnish maestro Osmo VÃ¤nskÃ¤, resigned.

“The music director is the vision of the organization,” said Ellen Dinwiddie Smith, a horn player with the orchestra. “With no music director, you have no vision.”

As difficult as the change has been, Smith said the orchestra is far from floundering in its added responsibilities.

“We’re the ones in control of the event, and for us that’s a new thing, and I think we like it,” she said.

The musicians will be performing Brahms’ Symphony No. 2, Wagner’s Prelude and Liebestod from “Tristan and Isolde,” along with Mozart’s Piano Concerto No. 23 in A major, a piece said to represent all that made the composer great. It’s melodic, elegant and falls from joy to sadness with an unmatched grace. Artymiw said she would list it as one of her top five favorites.

“It is one of the most tragic and compelling slow movements of all of the Mozart piano concertos,” Artymiw said. “The piano is grieving and the orchestra brings that grief to full flower. It’s so inward the way the piano solo begins, and then, when the orchestra comes in, I get chills. You can feel like Mozart has finally come to tears.”

There’s no word on when the Orchestra’s situation will come to a resolution, but for now, it’s nice to enjoy the music.