Robson and Schierhorn both in new territory at goaltender

The sophomore goaltender has played in seven consecutive games. 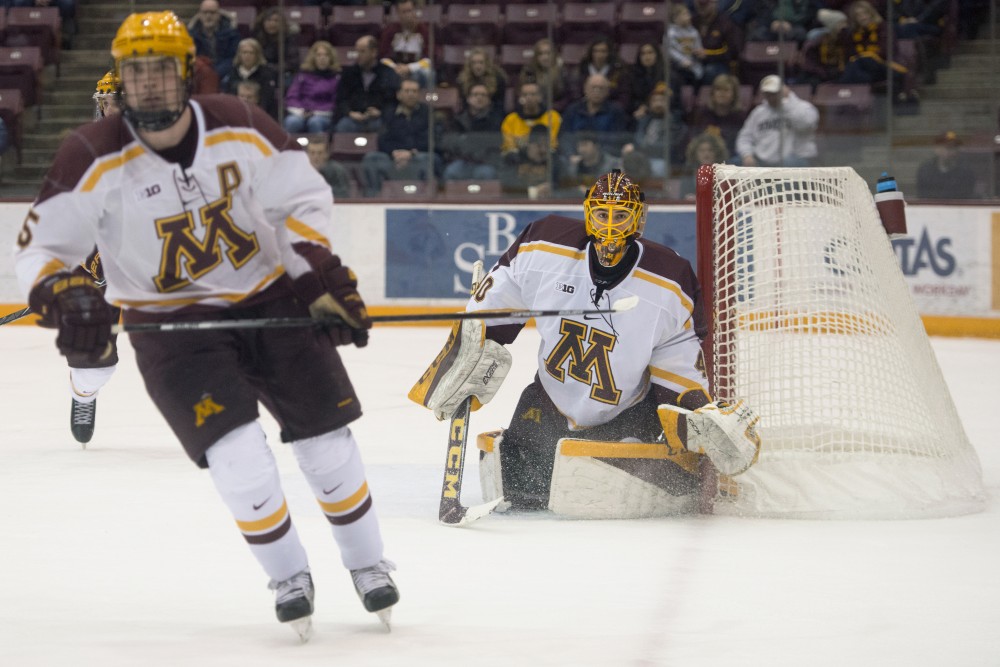 Sophomore goaltender Mat Robson reads the play during a game against No. 1 Notre Dame at 3M Arena at Mariucci on Jan. 26.

The offense has struggled and the defense has thrived, but the biggest story for Minnesota the second half of this season has been in the net.

Sophomore goaltender Mat Robson had to sit out the first half of the season and Eric Schierhorn faced the Nittany Lions when they came to 3M Arena at Mariucci in October.

The No. 8 Gophers face the final regular season matchup against No. 18 Penn State this weekend and the goaltending matchup will be different this time around.

“Sitting out the first half, it was a bit of a battle coming into school,” Robson said. “I knew I’d get my chance and I’m having fun doing it.”

One trend for Minnesota’s recent success can be largely attributed to Robson.

He came in for the game at Madison Square Garden against Michigan State and has started seven consecutive games since. He has won five of the seven starts, a tie against Ohio State and one loss to Notre Dame. His goals-against-average over that stretch was just under 1.43 per game.

The Gophers were two victories over .500 coming into the second game against the Spartans. Since that game, Minnesota has been on a tear. Now with one series remaining, the Gophers are six games over .500 and have improved their conference record to 10-10-2.

“He’s certainly giving us an opportunity every night,” head coach Don Lucia said. “He’s given us a chance to win some games 2-1 or 1-0 and that’s an important ingredient this time of the year.”

Though Robson’s success has been evident, Minnesota’s other starting goaltender, Schierhorn, has taken the backup’s spot on the bench for the first time in his three years with the Gophers.

Schierhorn was Minnesota’s uncontested starter for two and a half years, while Robson came in and disrupted his program-record 94-game start-streak. Now, Schierhorn and the newcomer Robson have been sharing the net, with the lion’s share going to Robson of late.

“You see the other guy at the end making saves and I think … it pushes us in practice,” Schierhorn said. “Mat’s a good goaltender and I think I can even learn from him, too.”

Prior to Robson’s emergence in the last seven games, Schierhorn played all of Minnesota’s games until mid-December. Schierhorn hasn’t struggled either — some of his numbers this season are better than his career averages. This season, he has a 2.52 goals against average, which is his best in his time with the Gophers.

Schierhorn sees himself improving despite his lack of game time, adding some of Robson’s calm playing style that he has been able to watch closely in games the last few weeks. The junior goaltender said he’s been working on making his game calmer even before Robson came in.

“You see the game from a different perspective, it’s simpler than sometimes you think it is,” Schierhorn said. “You don’t have to move as much as you think you do in certain situations.”

The situation has been fluid this season for the Gophers, but for now, the starter of the last few seasons has been temporarily supplanted while Robson earns playing time.

Robson and Schierhorn are close with one another, even though they compete for the same spot on the team.

“There’s competition every day at practice and that’s the way it should be,” Robson said.