Anastasia Korzenowski led the way for the Gopher women with an eighth place finish. 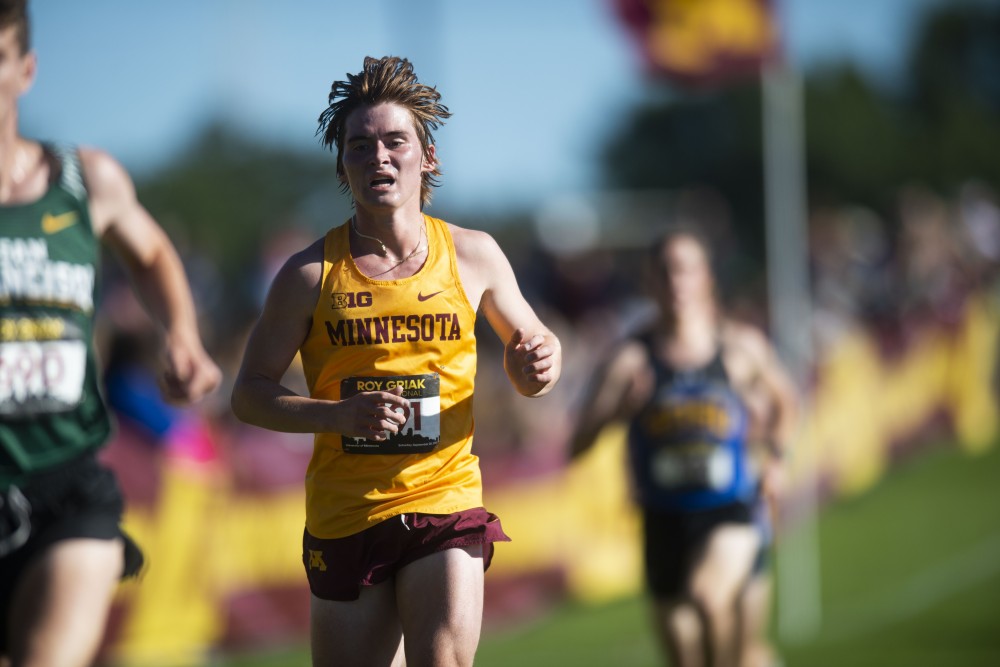 Redshirt Sophomore Hunter Lucas sprints for the finish line at the 2019 Roy Griak Invitational at the Les Bolstad Golf Course on Saturday, Sept. 28, 2019. The Gophers' men's team placed 7th in the Division 1 race.

On the women’s side, the Gophers were led by redshirt sophomore Anastasia Korzenowski with a time of 21:34.5 on the six-kilometer course. Korzenowski finished eighth overall to help the women’s team earn 81 points, three points behind second place.

The women’s team success was greatly influenced by how competitive the Gophers were from top to bottom. All of Minnesota’s top seven runners finished in the top 30 overall for the women’s competition.

Going into the meet, women’s head coach Sarah Hopkins did not expect perfection from her runners. Instead, she thought it would be a great opportunity to see how her team is doing in late September after one of the more competitive meets of the season.

Megan and Bethany Hasz finished third and fourth overall respectfully but competed unattached which means their individual results did not count toward Minnesota’s team results. Aoibhe Richardson of San Francisco, the individual winner of the women’s meet, finished with a time of 20:47.7 and Cal Baptist won the team title with 60 points.

The men’s squad for Minnesota was led by redshirt senior Connor Olson who finished 22nd overall. According to head coach Steve Plasencia, the men’s team did not run all of the team’s top runners due to few days between now and the team’s next meet.

“We have our overall goals in mind for the season and I think we took a step along the way today to achieving that,” Plasencia said. “We didn’t run all the guys we have, we held some guys back for next week out East and that’s by design.”

On the men’s side, Duke finished with 31 points to secure its second-consecutive title at the Griak Invitational and Columbia’s Kenny Vasbiner won the individual title with a time of 24:32.4 on the eight-kilometer course.

Both teams for Minnesota’s cross country program have a quick turnaround for the next meet of the season. On Friday, Oct. 4, the women’s team will have a group of runners compete at the Joe Piane Notre Dame Invitational while the other group will run at the Blugold Invitational in Eau Claire, Wisconsin. The men’s team will travel to Bethlehem, Pennsylvania for the Paul Short Run on Saturday, Oct. 5, hosted by Lehigh.