Junior Lindsay Mable was named the conference’s gymnast of the year. 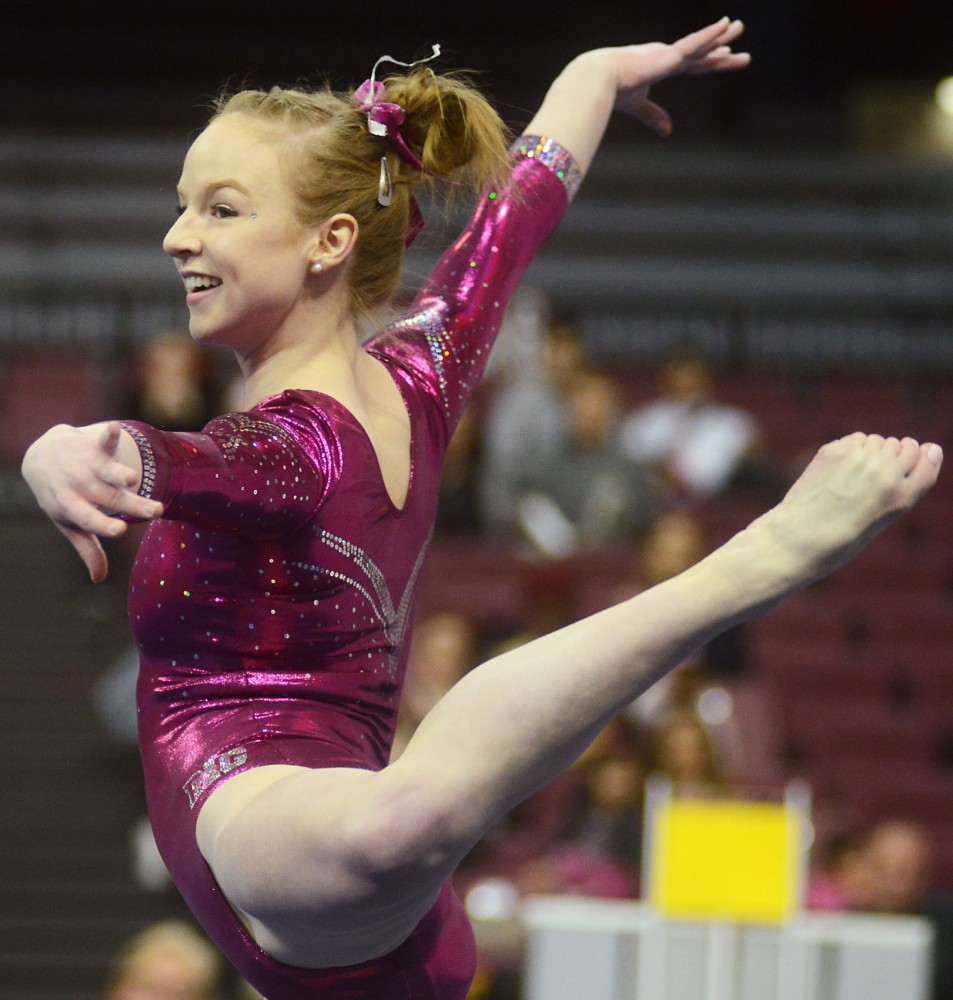 Junior Lindsay Mable performs her floor routine at the Sports Pavilion on Saturday evening where the Gopher Women's Gymnastics took on Nebraska for their annual Pink Meet.

After a comeback last week that advanced the Gophers to the second session of the Big Ten championships, their momentum faltered on Saturday in Ann Arbor, Mich.

The Gophers finished 6th with a team score of 196.450, while the competition’s host, University of Michigan, won its second consecutive Big Ten title.

“We felt like we had more in us, but we were proud of the performances that night,” senior Cierra Tomson said. “We have little things to improve on before regionals.”

Minnesota started the competition strong on floor, with Mable tying for her first event title of the night with a score of 9.925.

She continued her success, recording a first-place score of 9.950 on vault. Sophomore Rachel Haines was close behind, tallying a career-high 9.925.

“Rachel is from Michigan, and she had a lot of friends and family [at the competition], so for them to see her to do that was awesome,” Tomson said.

Going into their bye in the third-event rotation, the Gophers were in third place with only two events standing in their way of a Big Ten championship.

“We are still getting used to what the bye is like,” interim head coach Jenny Hansen said. “You need to keep the emotions going all the way through.”

The momentum faltered after the bye when Minnesota struggled on the uneven bars and scored an event-low of 48.575.

“It was disappointing how bars panned out, but one event doesn’t determine the whole competition,” Mable said.

The Gophers needed a comeback like the one last weekend, but they weren’t successful. Minnesota finished the championship on beam with Mable leading the team with a 9.9.

Mable placed second in the all-around and earned two more event titles to bring her season total to 29.

“We were all a little bummed out. We were expecting more, but we can’t change anything,” Mable said. “We did everything we could, and I’m happy we came back on beam.”

Mable and Haines were named to the All-Big Ten championship team for their performances.

After the Big Ten championship ended, Mable earned the 2015 Big Ten Gymnast of the Year for her performances all season.

“It’s a huge honor for me and the team. I wasn’t totally expecting it, but I’m very humbled,” Mable said. “It has been a long year, and we’ve been through a lot, but it’s like the cherry on top.”