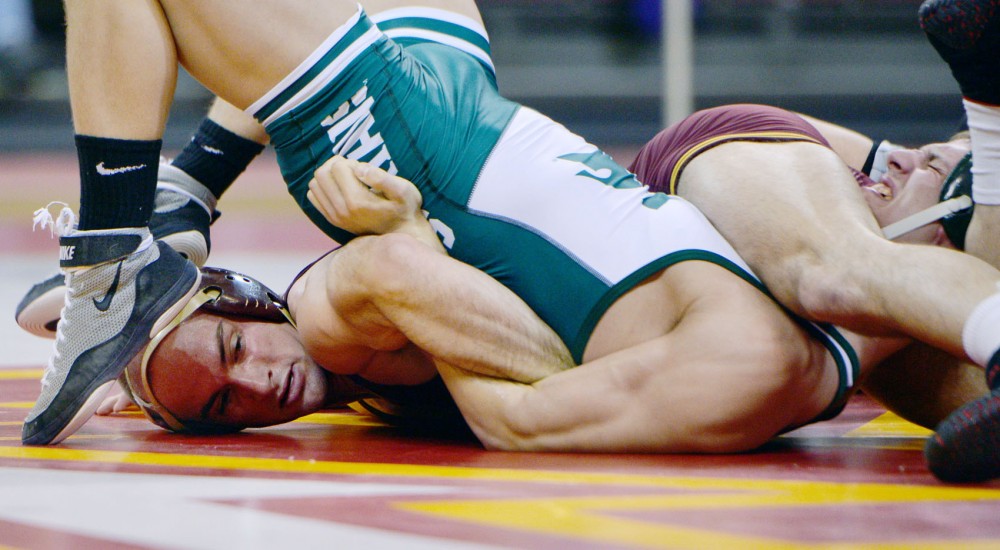 Cody Yohn took a long stare at the crowd, waved his arms and headed to the locker room at the Sports Pavilion for the final time.

He had just recorded a pin on Senior Day — the first at home in his career — and after the match, he admitted his emotions started to kick in.

“It was my last hurrah, and to have a match like I did coming off a pin was definitely something I’ll remember forever,” Yohn said after the No. 4 Gophers’ 32-6 win over unranked Michigan State on Sunday.

Yohn’s pin gave Minnesota a 14-6 lead, and the Gophers coasted to an easy win.

Minnesota assistant coach Brandon Eggum said Yohn’s pin helped the team build momentum. He said the pin was a fitting way for any wrestler to go out.

“We talked about the fact that it was Senior Day a little bit before the dual started,” Eggum said. “The guys wanted to do well for Cody, and it was great.”

Minnesota dropped only two matches in the dual and asserted its dominance over the lesser Big Ten team.

Yohn, the only senior starter on the roster, was visibly excited after the dual win. He said his stare into the stands after his match was his way to soak in the moment of his final home competition.

“If I won, I wanted one last mental picture for the books,” Yohn said.

Yohn said his pin proves he is peaking at the right time. The senior’s season has been up and down so far.

“This is an up-and-down sport, and to be on top all the time is damn near impossible,” he said, “but I’d rather have my wins later in the season.”

Eggum said he was satisfied with his team’s aggressiveness in the afternoon. He’s preached his team needs to earn bonus points all season, and it did so in six matches against the Spartans. Michigan State isn’t on the same level as conference powerhouses such as Iowa, but Eggum said the bonus points are a step in the right direction.

Yohn’s pin fall win might have been more of a leap. But the senior still has a lot to prove.

“I know the fact that my career is going to end is inevitable,” he said. “But whether or not I’m going to become a champion and leave a champion is still up for grabs.”

J Robinson returned to the sideline for the Gophers on Sunday afternoon. It was the first time in a month he’s coached in the Minnesota corner.

Though Eggum still handled most of the coaching, Robinson coached wrestlers on the bench and even gave the occasional yell from his chair.

“It was a refresher to see him back in action,” Eggum said. “We kept our eyes on him to make sure he didn’t do anything crazy at the end, but it was good.”

Eggum said the goal was to give both men a “mental break” from competition. He said Dardanes has been “banged up” in recent weeks, and this was a good chance to give him a dual off from competition.