After promising start, the Gophers fall in second round of the Big Ten Tournament

After gaining momentum after beating Wisconsin 4-0 on Thursday the Gophers were topped 4-0 by No. 1 Ohio State Friday. 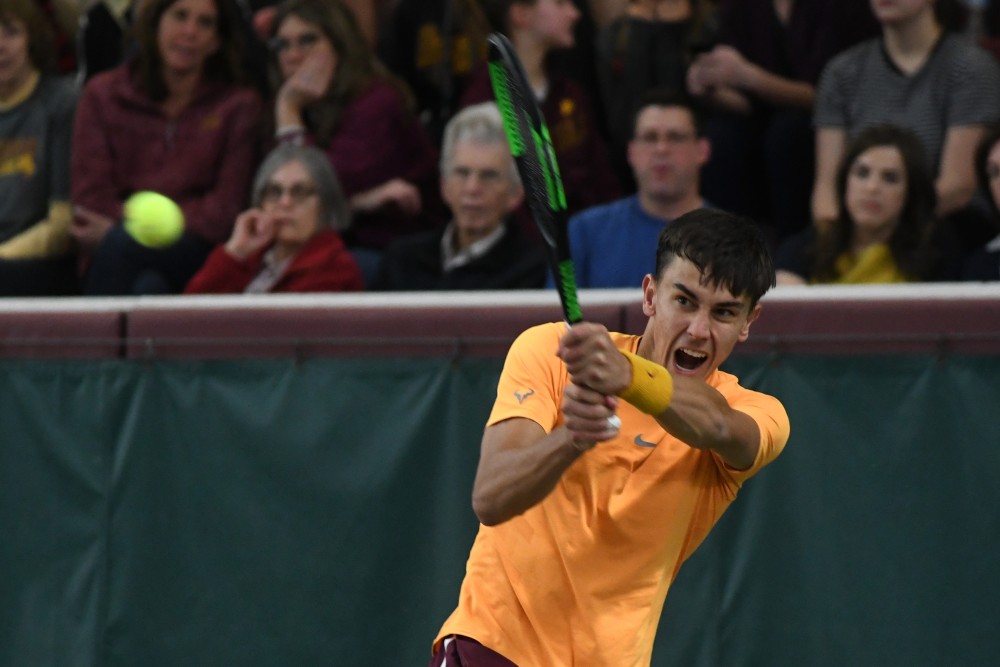 The Gophers’ Big Ten tournament run came to an end against the No. 1 team, but not before a victory against a border rival.

For the Minnesota men’s tennis team, it started off with a promising win in the opening round over Wisconsin. Momentum did not carry over as the Gophers were topped by No. 1 Ohio State(27-2) 4-0.

This is the second straight season Ohio State knocked the Gophers out of the Big Ten Tournament. It’s the team’s fifth straight victory over the Gophers dating back to March 30, 2018, which includes a match in the NCAA Tournament last season.

“We need to practice each day … to be able to sustain the level necessary to beat a team like OSU,” Young told Gopher Sports.

In their last matchup on March 31, the Buckeyes topped Minnesota 7-0 in Minneapolis.

The Buckeyes started on top after the doubles portion, with victories in the No. 1 and No. 2 spots to get the first point.

From there, Ohio State ended up taking three straight matches in singles and clinched the victory 4-0, leaving the last three singles matches unfinished.

On a positive note, sophomore Jackson Allen was in the No. 4 singles spot. He was on the verge of winning his match before Ohio State clinched the match point in another singles match.

Opening round victory against Wisconsin

To kick off the Big Ten Tournament, the Gophers played against border rival Wisconsin for the second time this season.

Unlike the first match, which was decided by one point in favor of Minnesota, this match was all Minnesota as the Gophers won 4-0.

“[The win] is big, it’s great [and it] always feels a little extra good to win a Big Ten Tournament match,” Young said. “We were expecting a really tough match, and I thought we played really well and took care of business.”

The Gophers started out quickly and took the initial doubles point as freshman Sebastian Vile and senior Josip Krstanovic began the day with a 6-2 win at the No. 3 spot. The No. 1 tandem of Allen and junior Eli Ogilvy clinched the point for the Gophers winning 6-3.

Allen carried the doubles momentum over to singles as he won without surrendering a point 6-0 and 6-0. He said his two previous matches against his opponent were key to his victory.

“I watched those matches a few times last night, so I knew what I wanted to do going in,” Allen said. “I went out there, executed really well and it just went my way today.”

Krstanovic followed Allen’s victory with a win of his own at the top singles spot in two straight sets: 6-3 and 6-2.

Sophomore Vlad Lobak closed out the Gophers’ victory at the No. 5 spot and also won in two sets: 7-5 and 5-2.

Although the Gophers had a winning record to this point at 16-9, they may not play an more this season. There’s a possibility that Minnesota clinches a spot in NCAA Tournament, which will be announced Sunday.