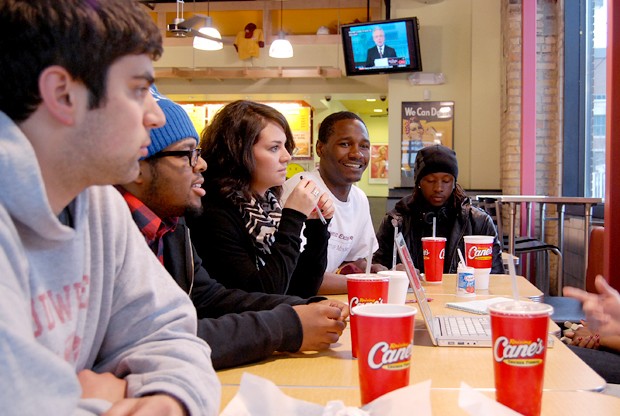 Students in the Cypher Coalition met Wednesday at Raising Cane's resturant to eat, discuss, and freestyle. The next event for the student run hip-hop group is a discussion on women in Hip Hop on April 8th.

A steady beat, a circle of people and the creative ability to express words through rhyming âÄî add that all together, and youâÄôll probably get a cypher: a method used in the hip-hop culture where impromptu raps are said one person to another in a cyclical chain-like pattern. At the University of Minnesota, the Cypher Coalition, a novice student group, is using group membersâÄô lyrical talents to share with the community and shed positivity on the hip-hop culture. Sociology senior Michael Lipset is a founding member and current president of the group. Lipset and three other students organized the group about a year ago, and it was officially recognized this school year. Lipset, the only remaining founder still active within the group, said he had been a fan of hip-hop ever since he heard Dr. DreâÄôs âÄúThe Chronic.” Lipset described it as âÄúhungry, venomous and energetic.âÄù Lipset has great expectations for the group members and speaks highly of them, labeling them as âÄúmotivated and energetic to make things happen.âÄù The Cypher Coalition has a goal to eradicate some of the stereotypes that members said surround hip-hop âÄî such as that rap music is all derogatory and negative âÄî and have educational discussions about the genre and its culture. âÄúWe want to bring out the positivity in hip-hop,âÄù Lipset said. âÄúWe want to give the hip-hop community on campus one common banner.âÄù After each discussion or event, the group members typically partake in a cypher. Lipset said that the group has so much fun during the cyphers that they often lose track of time. He recalled one particular cypher where he and about 40 other students held a cypher for more than an hour and a half in Moos Tower. Even a woman with a violin spontaneously chimed in to aid the person providing the beat while several others continued to rap over it. Not only does the group have fun with the element of hip-hop, they are also devoted to serving the community. They have a program called Leading Youth Responsibly in Creative Skillsets (LYRIC) where they donate their time to various schools in the Twin Cities area, educating kids on hip-hop as a creative art rather than solely entertainment. According to Lavasia McMillion , group secretary, âÄúhip-hop represents more than just music.âÄù

Looking ahead to the future
Each of the group members were optimistic and energetic for what the future holds. âÄúCombining one of the biggest schools with [hip-hop,] one of the biggest movements; just imagine the possibilities,âÄù Lipset said. âÄúThis group has no limits.âÄù Despite the group being in its inaugural year, the attitudes and visions of the Cypher Coalition do not reflect inexperience. The groupâÄôs emcee liaison, DâÄôAllen White, said he has seen a lot of interest building around the group despite its relatively small membership. âÄúI really am loving how [weâÄôre] going,âÄù he said. âÄúWe have so many members on Facebook.âÄù The Cypher Coalition has a few projects in the works. The group is co-hosting a discussion with the WomenâÄôs Student Activist Collective about women in hip-hop and whether the opportunities hip-hop offers are worth the negative consequences of the industry. The event will be held April 8 at 7:00 pm in room 325 of Coffman Union. Also in April, the group plans to hold a blood drive and an open mic.