3-D technology will soon be available for television, cell phones and gaming. 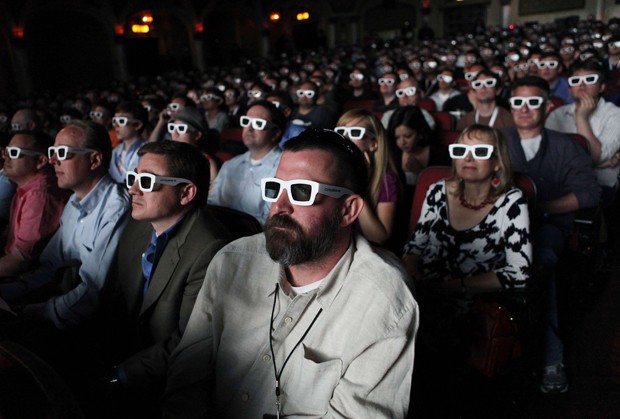 As 3-D films climb the summer box office charts, and 3-D televisions make their way into the home, a University of Minnesota professor has taken a closer look at how the technology works.

Dr. Gail Summers uses her experience as a pediatric ophthalmologist — an eye doctor — to explain how movie studios are able to give their films another dimension, and why some people leave the theaters with headaches.

By using two cameras set a small distance apart — like eyes separated by the nose — filmmakers are able to create the illusion of depth at the movies, Summers said.

The video is projected so each eye sees a different image from a different perspective. With the help of a pair of polarized glasses, the characters and scenery can jump off the screen.

It’s called stereoscopic imaging, and it has swept the entertainment industry. By the end of the year, at least 24 new movies will have been released using the technology — 10 more than in 2009.

Despite the popularity, some people have left the theaters less than thrilled. Summers had an explanation for that, too.

“There’s that disconnect between what your body is telling you and what you’re seeing on the screen, and I think that’s what makes people uncomfortable,” Summers said.

Though the eyes have convinced the brain that the body is moving, the inner ear — responsible for balance and movement information — is stationary.

So while some can enjoy a 3-D movie with no issues, confusion between the eyes and body may disturb some people more if they have inner-ear problems, Summers said.

Headaches, motion sickness and eye irritation may be the worst of the problems, she said.

“It’s unlikely it would cause any permanent damage to your eyes. It’s annoying,” Summers said of the symptoms, “and for some people, a little more annoying than for others.”

University graduate student Chris Sheehy said he didn’t experience any problems when he saw “Avatar” in theaters earlier this year but that it might be a while before he gives into the lure of a 3-D television.

“I’ll probably change my story in three years when the prices come down,” he said.

Movies using stereoscopic imaging have been around since the late 1800s, but it didn’t take off until recently because of inadequate technology.

“The current technology is so far superior to anything that had been available before that it has excited filmmakers and audiences,” said Peter Koplik, executive vice president of 3-D applications developer MasterImage 3D. “The days of paper glasses and rudimentary images on screen are really over.”

Koplik’s company is working to ensure those days are indeed done. More than 1,600 of its 3-D systems are installed in movie theaters worldwide, 390 of which are in North America, according to the
MasterImage 3D website.

In addition to its work in the movie world, MasterImage 3D worked with Hitachi to create the first cell phone with a 3-D display. That phone features a three-inch screen that doesn’t require glasses to view in 3-D.

The future of the 3-D industry looks bright in the mobile world, Koplik said. While a cell phone screen may not be preferable for watching movies, “it’s going to be extremely popular with gamers,” he said.

Though he declined to address the health questions that experts like Summers have discussed, Koplik said 3-D technology in the theaters will continue to improve and change.

“It cannot be over-emphasized enough how early in this process we are,” he said of the industry as a whole. “We’re still in the early stages of 3-D production.”