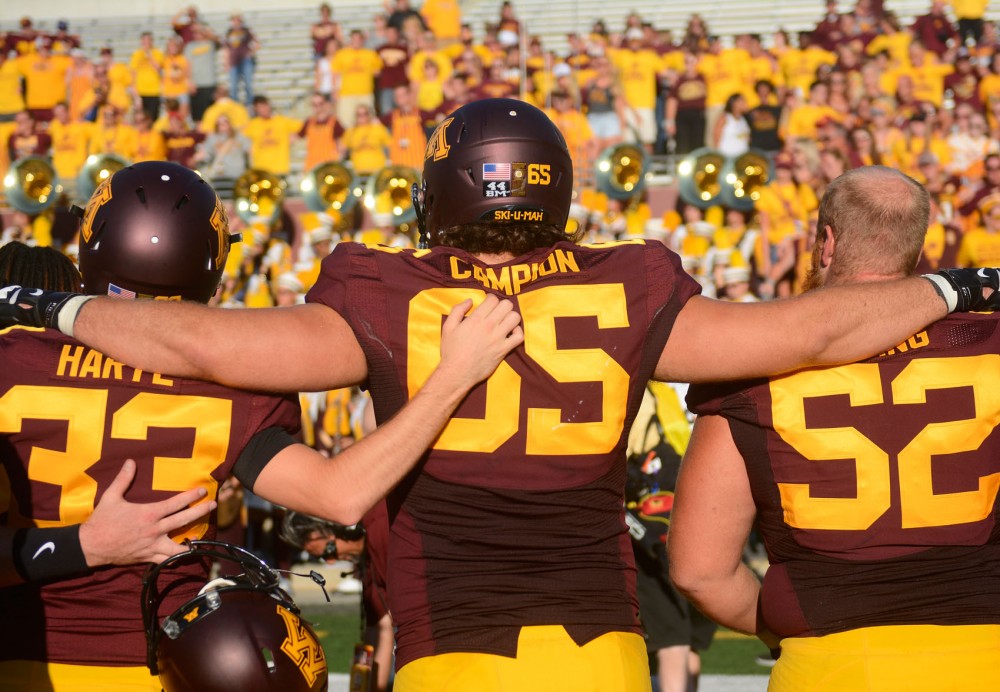 Offensive lineman Josh Campion puts his arms around his teammate's shoulders during a game on September 6, 2014, where the Gophers faced Middle Tennessee at TCF Bank Stadium.

Grant Donald
When Minnesota offensive lineman Jon Christenson arrived on campus in 2011, he weighed a measly 266 pounds — the lightest offensive lineman on Minnesota’s roster.
Christenson’s first year as a member of the Gophers also happened to be current head Coach Jerry Kill’s first year leading Minnesota’s program, including the workout plans.
“I didn’t know anything other than Coach Kill’s workouts, but I know plenty of the other guys were noticing a huge difference,” Christenson said. “There was a lot more focus on explosiveness and working out with more intensity.”
Fast-forward four years — and hundreds of workouts later — and Christenson will enter his redshirt senior year standing at a stout 303 pounds.
And the Minnetonka, Minn., native isn’t the only offensive lineman on the Gophers who has grown under the direction of Kill. Since the 2011 season, Minnesota’s offensive line has increased its average weight by about nine pounds.
“When we first got here [the offensive line was] about 275 [pounds] and slow,” Kill said during a Chalk Talk event in Hutchinson earlier this month. “When we start up front next year we’ll be 6 feet 7 inches, 325 [pounds at left tackle]. … That’s a lot different than what we used to look like.”
And the added weight to Minnesota’s front line has been put to good use.
Last year, the Gophers finished 30th in Football Bowl Subdivision college football in rushing yards per game, with an average of 215.5 yards on the ground.
In addition, former Gophers running back and current Tennessee Titan David Cobb set the Minnesota single-season record for rushing yards in 2014 after running for 1,626 yards.
“David really wasn’t too outwardly spoken about trying to beat the [single-season rushing] record, but as offensive linemen we talked about it all the time,” Christenson said. “We looked at it as our record to break as well. We wanted to be the base of creating Gophers history.”
They created that base, Christenson said, in the weight room. Leading the charge for the Gophers is head strength and conditioning coach Eric Klein, who has been coaching with Kill since 1994.
“Not only does coach Klein know what he is talking about, but he will make sure you understand why we are doing certain lifts,” Christenson said. “That’s really beneficial in the summer months when we have to lead our workouts by ourselves.”
While the Gophers are progressively getting larger during their time on campus, recruits are also getting bigger under Kill and his staff.
Incoming freshmen linemen Tyler Moore and Quinn Oseland arrived on campus listed over 300 pounds, and freshman tackle Nick Connelly is listed at 6 feet 7 inches.
“The class that’s coming in, recruiting-wise, is probably our best class,” Kill said at Chalk Talk in Hutchinson. “They’ve got to prove it on the field, but they’ve got length, they’ve got speed, and that solves a lot of problems.”
Minnesota also has big linemen committed for the future. The Gophers currently have the 29th best 2016 recruiting class in the nation, according to 24/7 Sports, and the 35th best according to Rivals.com.
Four offensive linemen are currently part of that class, including 6-foot-8-inch, 285-pound lineman Sean Foster and 6-foot-6-inch, 272-pound lineman Sam Schlueter.
At Chalk Talk, Kill attributed the recent recruiting success to winning more games. However, Schlueter looks toward a different reason why big offensive linemen are starting to flock to the Gophers.
“They love to run the ball,” Schlueter said. “Coach Kill knows how important winning the battle in the trenches is. I want to play for a coach that values what I do best.”
Delete Image
Align Left
Align Center
Align Right
Align Left
Align Center
Delete Heading