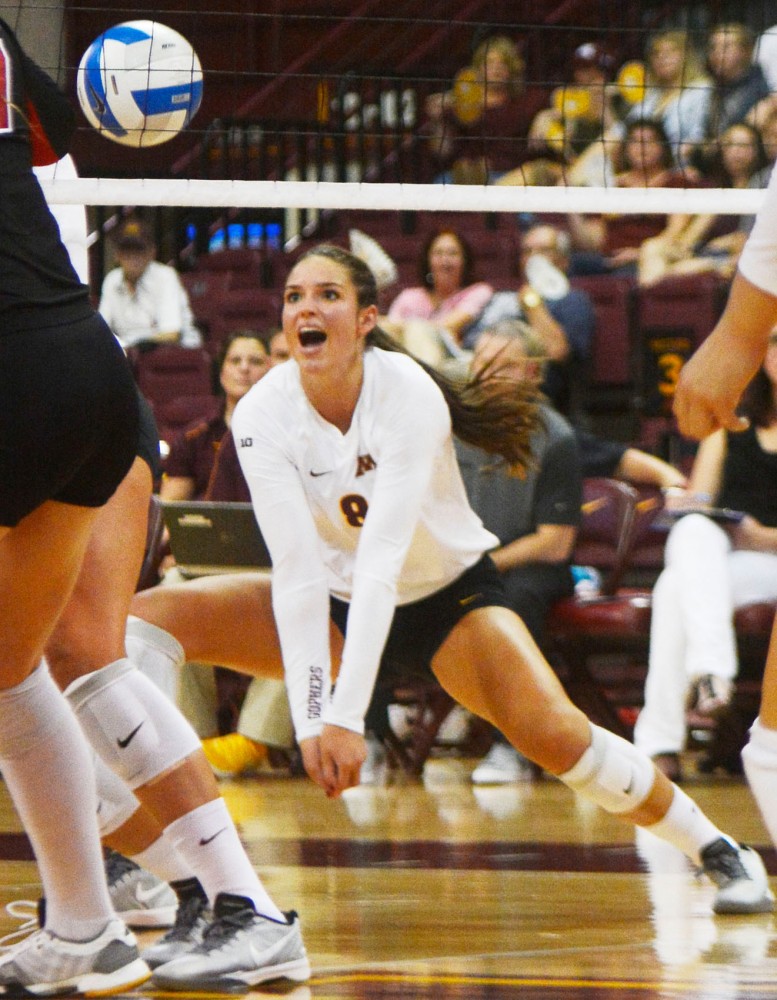 University of Minnesota outside hitter Sarah Wilhite lunges for the ball Saturday night at the Sports Pavilion.

Minnesota overcame its difficulties away from home this weekend, earning its first road victory in Big Ten play.

The Gophers took Michigan State to four sets Friday night and won, but they couldn’t keep the momentum alive Saturday night and fell to Michigan.

“I thought we were in good control [Friday],” McCutcheon said. “[Saturday] was kind of the reverse of that.”

Aside from a second-set loss, the Gophers controlled the match against Michigan State on Friday.

“The second set was kind of an exception,” Wilhite said. “We erred a little bit more.”

Both teams had 55 kills Friday, but Minnesota had only 15 attack errors to Michigan’s 30.

“Once we were able to knock them out of system, I thought our block and defense was pretty solid,” McCutcheon said.

Saturday was a different story for the Gophers, as Michigan swept them in three sets.

Freshman Alyssa Goehner said the team was inconsistent across the board.

“I felt we were still on cloud nine after [Friday],” Goehner said.

The first set against Michigan was the closest of the three, but the Wolverines stole that set away from Minnesota.

“Offensively, they did a few things at a higher level that were able to exploit some of our weaknesses,” McCutcheon said.

The Gophers stayed close with Michigan throughout the third set but ultimately weren’t able to keep up.

Wilhite said the Gophers didn’t have the best night receiving serves and also struggled with blocking.

“We didn’t really make a ton of adjustments to the hitters,” Wilhite said. “We kind of stuck to a plan rather than adjusting throughout the game.”

Minnesota made many lineup changes over the weekend, including moving Wilhite to the right side and bringing Goehner up to the front as an outside hitter.

Goehner said she was excited to be back in her high school position, but Wilhite was more apprehensive.

“I was a little bit nervous at first, to be honest,” Wilhite said.

But Goehner said the switch was a great change because Wilhite puts up a good block on the right side.

“Her block can stop any outside hitter,” Goehner said.

Saturday was just one of many times McCutcheon has switched around the lineup this season, trying to come up with a combination for success.

“When one thing’s not working, I think the worst thing you can do is just keep doing the same thing that isn’t getting you what you want,” he said.