Locals gathered as part of International Day of Climate Action. 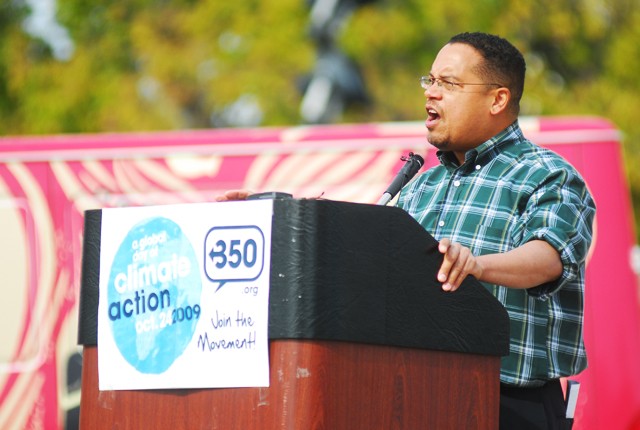 Keith Ellison, D-Minn., speaks at the International Day of Climate Action rally at the State Capital on Saturday.

A horde of bicyclists arrived at the state Capitol on Saturday to rally support for global climate change action alongside lawmakers. Hundreds of local students, community members and lawmakers gathered on the Capitol lawn with picket signs and posters in a demonstration for global climate change as part of the International Day of Climate Action. âÄúYou are not the future, you are the present âÄî you are the now, you are the people who are leading the way,âÄù Rep. Keith Ellison, D-Minn., told the young crowd. âÄúKeep your voices loud.âÄù The event was one of more than 5,000 that took place Saturday in 181 countries as part of an international campaign meant to raise awareness of the global populationâÄôs concern over climate change. The day was inspired by this DecemberâÄôs United Nations climate change conference in Copenhagen, when leaders from around the world will meet to finalize a new global climate change agreement. âÄúWe canâÄôt be talking about cutting carbon in 20 years; weâÄôve got to cut carbon now,âÄù Ellison said. âÄúWe need to have strong climate justice legislation now, before this president goes to Copenhagen.âÄù Ellison said the passing of a national climate bill is necessary for the country to be seen as a leader in climate policy. âÄúWe want to see the U.S. have teeth when we go to Copenhagen,âÄù said Abby Fenton, an event organizer from the Will Steger Foundation. Maren Daniels, a first-year student at Augsburg College who was among the bikers, said she came to the rally to help raise awareness of the climate trouble the world is facing. âÄúThis is an issue we need to address pretty urgently so that we can start fixing it now,âÄù Daniels said. The event was created by 350.org, an organization seeking a fair global climate treaty that would reduce international carbon dioxide emissions from their current level of 390 parts per million (ppm) to 350 ppm, the level they say is the safe upper limit of carbon dioxide in the atmosphere. âÄúThis is an urgent issue and this is the best way to get our voices heard,âÄù said first-year Augsburg student Justin Caron. In a prepared statement from U.S. Sen. Amy Klobuchar, D-Minn., read by a staffer at the event, Klobuchar said, âÄúcomprehensive climate change policy is essential. The science is clearer, the stakes could not be higher and the time to act is now.âÄù Other speakers at the event included Democrat U.S. Rep. Betty McCollum, Sen. Ellen Anderson, DFL-St. Paul and Rep. Kate Knuth, DFL-New Brighton. Sponsored by the Will Steger Foundation, 1 Sky and Oxfam Action Corps, the event is thought to have been the most widespread day of climate action in history.