Minn. travels to face No. 6 Buckeyes

The Gophers hope to get their second-ever win in Columbus. 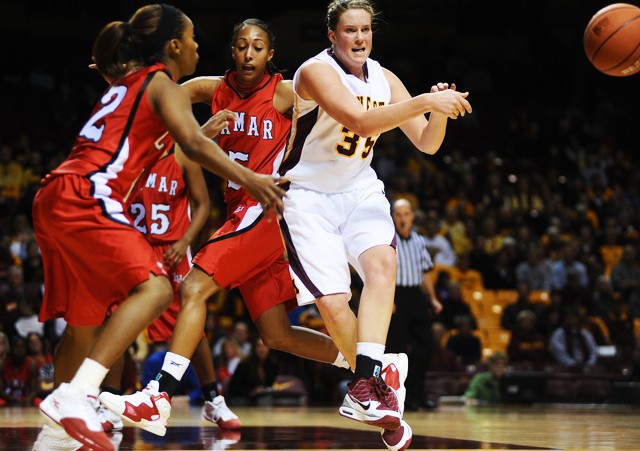 Rarely does the transitive property ever play out in sports. The Minnesota womenâÄôs basketball team hopes it can hold true this weekend. No. 4 Ohio State welcomes the Gophers to Columbus on Thursday, just three days after the BuckeyesâÄô 63-61 loss to Purdue. Minnesota destroyed the Boilermakers, 74-47, on Jan. 14. Calling Ohio State dominant in the Big Ten would be an understatement. They lead the conference in points per game with 79.5 âÄî 10 points more than any other team. The Buckeyes also have an average scoring margin of plus-20.6 points per game, which is seventh in the NCAA. Those stats make PurdueâÄôs upset over Ohio State, which snapped the BuckeyeâÄôs 12-game winning streak, all the more surprising. âÄúI think, as we can see with Purdue beating them, anything is possible,âÄù Minnesota head coach Pam Borton said. âÄúItâÄôs a great opportunity for us to get off this two-game losing streak.âÄù Ohio State boasts two of the top players in the Big Ten in junior center Jantel Lavender and sophomore guard Samantha Prahalis. Lavender leads the conference in scoring with 21.1 points per game and is second in rebounding with 10.3 per game. Prahalis leads the Big Ten averaging 7.73 assists per game and is sixth in scoring with 15.6 points per game. Despite Ohio StateâÄôs star power, recent history plays in MinnesotaâÄôs favor against the Buckeyes, as one of the biggest wins for the Gophers last season came when they won 59-56 in Columbus, marking the first time Minnesota had won at Ohio State in program history. âÄúOhio State can be beaten, and I think if we can go in there and get off to a fast start, that will help,âÄù sophomore Jackie Voigt said. The Gophers will once again be without the services of junior guard China Antoine. Borton said she will be out against Ohio State as the team continues to take her knee injury day by day. Senior Katie Ohm got the start last Sunday in AntoineâÄôs place and responded by scoring 10 points in 30 minutes in a loss to Michigan State. Minnesota also misses Antoine for her ball-handling ability. The Gophers still lead the Big Ten in turnover margin, being plus-4.16 on the season, but in the two games that Antoine has missed they have averaged 14 turnovers per game. âÄúI have all the confidence in the world with Brittany [McCoy] out there, and Key [Kiara Buford] is another primary ball handler. I think theyâÄôll be fine,âÄù Borton said. After Ohio State, the Gophers then move on to face one of the coldest teams in the Big Ten as they host Illinois, losers of four-straight games, at 4 p.m. Sunday at Williams Arena. The Illini have been unable to distinguish themselves from the bottom of the Big Ten and are currently tied for last place in the conference. However, one of IllinoisâÄô three conference wins came at MinnesotaâÄôs expense, as the Illini won 64-62 on Jan. 10 in Champaign. Perhaps the one and only threat Illinois possesses is senior Jenna Smith. The Bloomington, Minn., native is second in the Big Ten in scoring, with 19.3 points per game and tops in the conference in rebounding, averaging 10.9 per game. Smith torched the Gophers in their first meeting with 26 points and 11 rebounds. âÄúI thought we did a good job in the first half of limiting [Smith] in the first game, but weâÄôve got to do a better job on her,âÄù Borton said. âÄúObviously we felt that game was taken away from us there, and weâÄôre looking forward to getting one back.âÄù