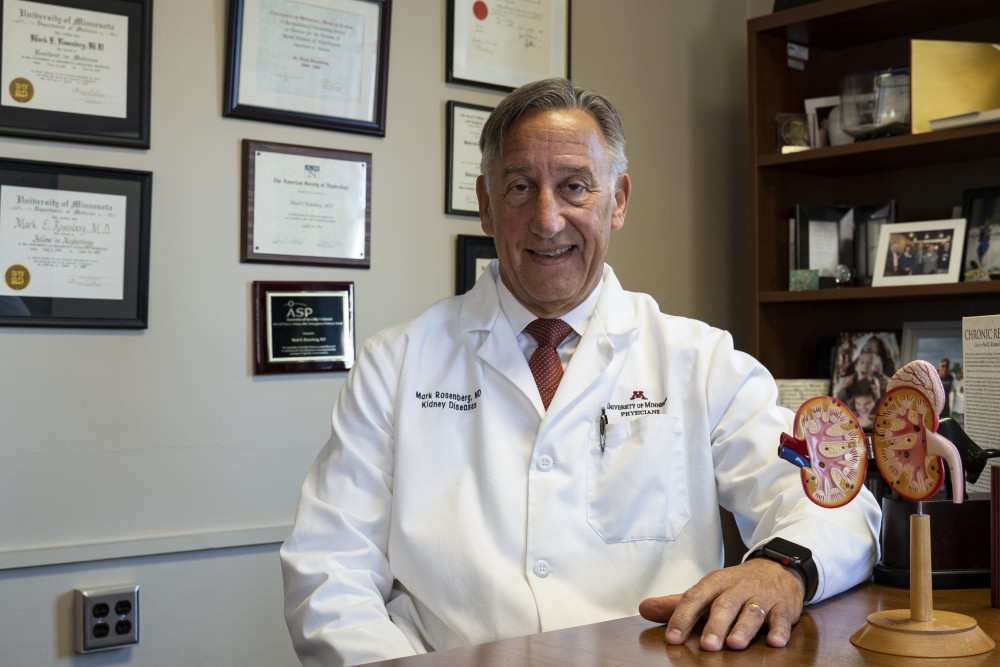 Dr. Mark Rosenberg poses for a portrait on Monday, July 22 in his office in the Mayo Building where he conducts research on Kidney and Chronic Kidney Disease.

Earlier this month, President Donald Trump signed an executive order to advance kidney health in America — endorsing work being carried out at the University of Minnesota.

The University is known for its kidney transplants and research, and Dr. Mark Rosenberg, the vice dean for education and academic affairs at the Medical School, is leading some of its efforts. Rosenberg, who is also the president of the American Society of Nephrology, went to the White House to witness the signing of the order and met with the Department of Health and Human Services secretary.

“This was a huge moment, it’s recognition that kidney disease is a major health problem and an area that’s in need of transformation. The order is a bold vision that has unveiled how the executive branch is going to change the approach to kidney disease,” Rosenberg said. About 40 million people in the United States have kidney disease, with more than 730,000 living in Minnesota. Patients with kidney disease often have to be placed on dialysis or need kidney transplants. Dialysis removes toxins from the blood and is needed when the kidneys fail.

Delano Gurley, 37, from Brooklyn Center, has had kidney disease since he was 18. He’s already had two kidney transplants and is hoping for another transplant from the University. He is currently on at-home dialysis.

Gurley said doing at-home dialysis instead of going to a clinic is beneficial because he has more freedom and is in control of his own treatment.

“You’re in charge of your own healthcare really. Your own treatment … it forces you to really be more responsible and be your own doctor and to take your healthcare into your own hands,” he said.

“I think it’s due time. I’ve been dealing with kidney disease for about half of my life and it’s really an underserved population of people, so I think it’s great news that the spotlight is on kidney disease and kidney issues. A lot of people just don’t understand it or aren’t aware of it and a light needs to be shed upon it,” he said.

Going on dialysis is time-consuming and difficult, as it has to be done multiple times a week for hours at a time, said Patrick Nachman, the director of the Division of Renal Diseases and Hypertension at the University.

“It’s tiring. Most people have trouble carrying out a full-time job. … We want to improve how dialysis is done and improve the quality of life,” he said.

Current research conducted at the University and across the country is hoping to create new methods to treat kidney disease that are more convenient. New innovations include improving at-home dialysis options and working towards creating artificial kidneys.