Lawmakers forward five candidates for the Board of Regents 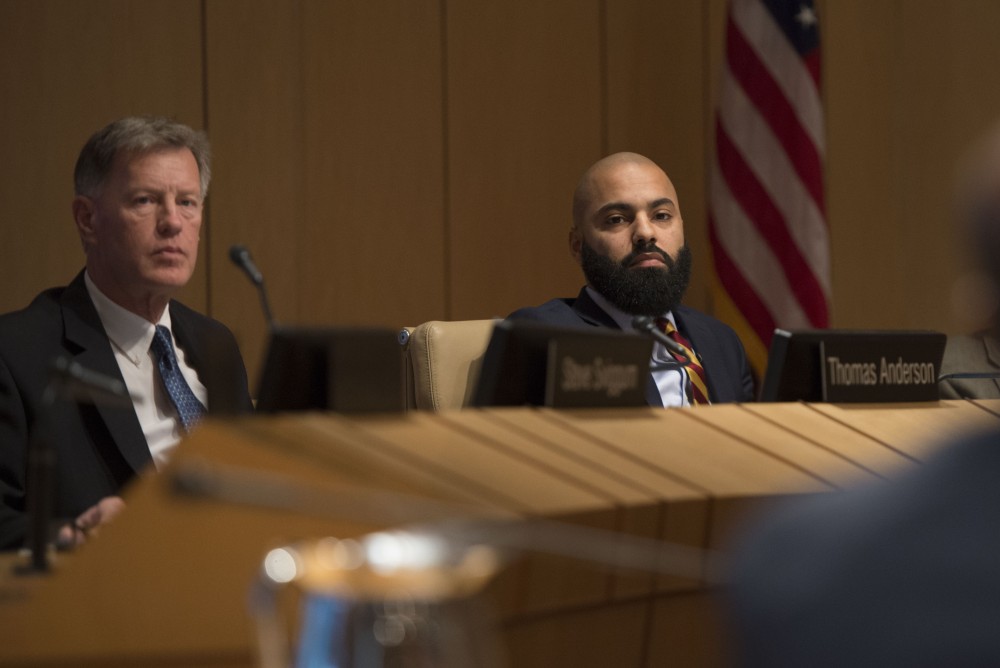 Abdul Omari listens to Law School Dean Garry Jenkins during the University's Board of Regents meeting at the McNamara Alumni Center on Friday, Feb. 8.

House and Senate higher education committees voted Monday to forward five University of Minnesota Board of Regents candidates for consideration in the upcoming election.

The seats up for election are the student regent seat, the 5th Congressional District seat and two at-large seats. The full legislature will vote on candidates for the four seats later this session. Candidates discussed topics like handling conflicting opinions, tuition and working with University President-Designate Joan Gabel before lawmakers moved forward with recommendations.

Mary Davenport, former interim president at Rochester Community and Technical College, was nominated for an at-large seat. Davenport was forwarded by the joint committee for the 1st Congressional District seat last session during a special election, but was ultimately not selected by the legislature.

“Throughout my career, I’ve always looked at the student as being the center of the higher [education] circle,” Davenport said. “[If] we keep that focus, then I think we can better address all the other type of issues with keeping the student in mind as the centerpiece of it.”

Regent Abdul Omari was not forwarded for an at-large seat. However, the legislature is not bound by the joint committee’s recommendations. Omari was also not recommended by the Regent Candidate Advisory Council last month with the council citing a lack of experience. Rep. Aisha Gomez, DFL-Minneapolis, moved to include Omari in the candidate pool for the 5th Congressional District seat.

Omari said although he was not seeking nomination for the 5th Congressional District seat, he believes he is best suited to work with University President-Designate Joan Gabel.

“I believe that I am best situated as the strongest person to make sure that the president’s successful, whereby making the University successful, thereby making our state successful,” Omari said. “I have a unique relationship with [Gabel] that has been built over the past months.”

Janie Mayerson, a former United States District Court judge, was forwarded for the 5th Congressional District seat. Incumbent Regent Peggy Lucas, who was not forwarded for the seat, said her past experience would help the board during the presidential transition.

“I have served [the 5th District] for six years. As you know, the learning curve for a complex institution like the University is a steep one,” Lucas said during the meeting. “I believe that our new president will benefit from an experienced and diverse board.”

The committee was unable to reach a vote on the second at-large seat and approved a motion to move forward two candidates, CEO of the Hmong Elders Center in St. Paul Ilean Her and Sandy Wiese of the Data Recognition Corporation in Maple Grove. Regent Dean Johnson, who currently holds an at-large seat, was not forwarded.

Mike Kenyanya, student body president for the Duluth campus, was moved forward for the student seat.

“We’ve really appreciated the dedication and the intention that Mike Kenyanya has put on this issue of tuition,” Mishra said. “[He brought] up several times the importance of ensuring that financial access is not a barrier to students who want to attend university.”

Though the process is not over yet, keeping students involved is important, Mishra said.

“I think overall the themes of transparency and accessibility were really clear in this cycle of the regent selection process,” Mishra said. “So far, students who want to engage have been able to, and that’s something we’re incredibly thrilled about.”