Some say biking is easier in the winter thanks to plowed roads. 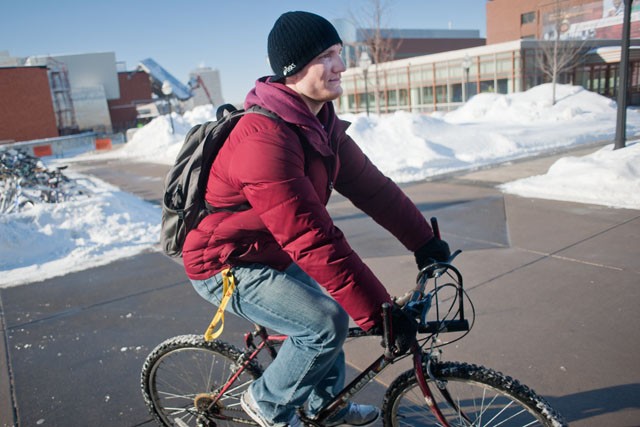 Emily Schneider was almost to work Sunday when she hit a patch of ice.

Trying to stop, her bike spun out from underneath her and flipped her onto the ground, causing her to hit her head and to hurt her leg in the process. She was taken by ambulance to the University of Minnesota Medical Center. Her helmet had protected her head, but her leg was bruised.

Schneider was one of three people treated for bike-related injuries at the Medical CenterâÄôs University campus in November and December. Boynton Health Service officials and University police Deputy Chief Chuck Miner said they didnâÄôt see a rise in biking accidents or injuries.

Walking to class can be difficult as people struggle with unshoveled, uneven and icy sidewalks, but Jameson McGuine, co-owner of Varsity Bike & Transit in Dinkytown, said it is actually easier biking.

The bike lane might be gone, but the streets are plowed, McGuine said. He bikes even when itâÄôs snowing.

“It makes it very hard, but there hasnâÄôt been a day that I havenâÄôt been biking.”

Steve Sanders, who works with the UniversityâÄôs Parking and Transportation Services bike program, said heâÄôs noticed fewer bikes this year. This winter has been harsh as far as transportation is concerned, Sanders said.

Garrison Kubis, a computer science first-year student, said he rides on the sidewalk to avoid the snow.

Minneapolis was named the best bike city by Bicycling magazine in April 2010. The city tries to be bike friendly and provides a list of tips for safe winter biking. It recommends traveling slower, especially on curves and turns, and riding in general traffic lanes if bike lanes arenâÄôt clear.

The cityâÄôs website also suggests bikers use parts of the more than 84 miles of bike trail. A map of trails as well as maintenance information can be found on the cityâÄôs website, but the majority of trails do not reach the entire way through either campus.

This spring, University students will have a biking center on campus.

The Campus Bike Center in the Oak Street Ramp is expected to open this spring. Sanders said they will offer classes about biking.

McGuine, Kubis and Sanders stressed preparing for winter biking by wearing layers and covering up âÄî with extra pairs of socks, scarves or goggles.

Schneider wonâÄôt let her recent accident discourage her from getting back on her bike.

“As soon as I can I will be back on it,” Schneider said, “it is so much faster than walking.”