‘The power of art to change a perspective’ 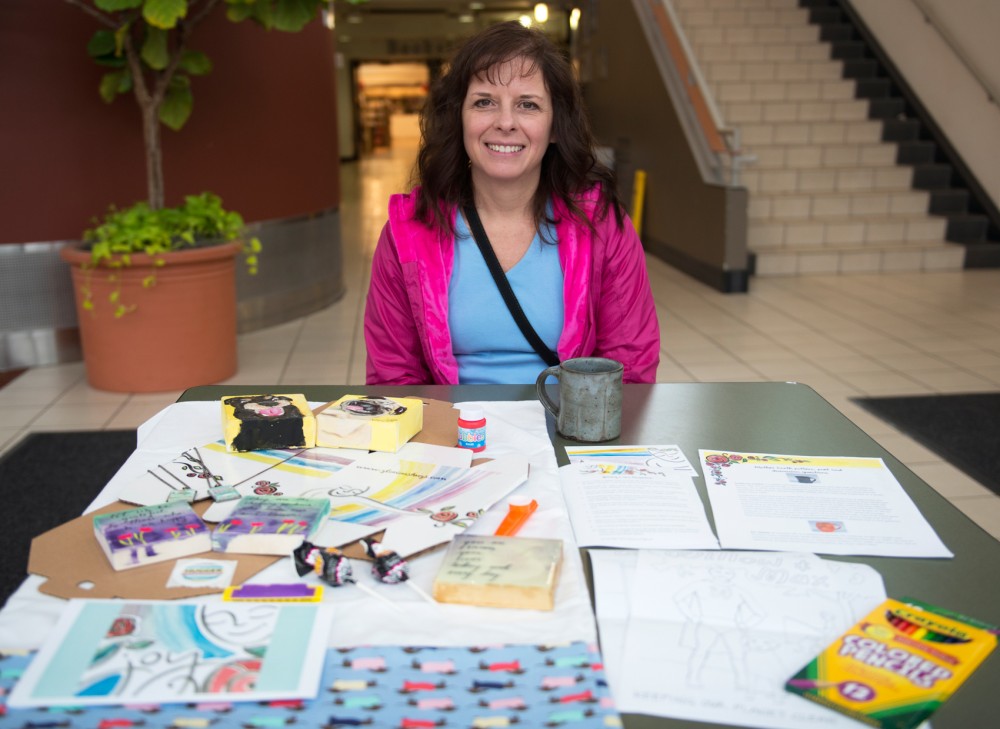 Mary MacCarthy, founder of personalized care package service Glorious Hugs, shows the packaging and contents of one of the care packages offered by the service. MacCarthy was inspired by the power of handmade art to provide inspiration to people and to help their lives.

by Olivia Johnson
Glorious Hugs, a company that creates and sells care packages, recently started making the boxes of treats for college students. The company’s founder will soon begin purchasing University students’ art for the packages.
“I was a psychology major in college and have always been concerned about mental health issues and saw the power of handmade art throughout my life and the power of art to change a perspective,” said Mary MacCarthy, who started Glorious Hugs in January.
MacCarthy met last month with Diane Katsiaficas, a professor in the University’s art department, to purchase handmade art from students. MacCarthy said she will officially begin requesting art from students in the next few weeks.
She said she intends to pay students directly for their art pieces, and the art will be available in the care packages by the end of the month.
MacCarthy currently includes art pieces like paintings and pottery from local artists. She said she is also talking with the University’s bookstore to see if it would be interested in stocking the packages.
Her products were originally available for senior citizens but expanded to college students after suggestions from customers.
“This is just one little way to make it easy for people to connect and show that they love somebody else,” MacCarthy said.
As she was developing the care packages for students, MacCarthy met with Gary Christenson, the chief medical officer at Boynton Health Service, who first suggested she buy art from students.
Christenson said stigma surrounding mental health is decreasing and people are more willing to seek help for mental illnesses. He said treating mental illnesses requires different approaches, which could include art for some people.
“I’m a strong advocate of considering the arts as a way to decrease stress,” Christenson said.
According to the 2013 College Student Health Survey, 19.3 percent of University students report being diagnosed with depression in their lifetime.
MacCarthy reached out to Active Minds, a mental health student group, to learn about what kinds of items students would appreciate in a care package.
“I think struggling with mental illness as a college student can really be isolating,” said Victoria Blakeborough, the president of Active Minds. “Care packages can be kind of a nice way for people in your life to show that they care about you and that they’re thinking about you. Even if they’re far away, you have something physical to remind you of them.”
She said the group also liked the mugs and handmade pillowcases and advised MacCarthy to include items students wouldn’t generally purchase for themselves.
Blakeborough, a psychology and gender, women and sexuality studies junior, said she thinks the art included in the packages is therapeutic and helps students focus on something other than the stress that classes can create.
MacCarthy said she has also received interest in the care packages from the University of St. Thomas and Century College.
The care packages were initially made available for senior citizens because MacCarthy’s grandmother is in hospice care. After frequently visiting her grandmother in the nursing home, MacCarthy said she saw that a lot of people in nursing homes don’t have many visitors.
She said Glorious Hugs was created to encourage seniors to socialize.
Since the care packages don’t fit in a mailbox and are a unique shape, it makes it easy to ask questions about it and encourage conversation, which could also spur conversation in college dorms, she said.
“It’s also got to be deep. It’s got to inspire conversations. Great art can,” said MacCarthy.
Delete Image
Align Left
Align Center
Align Right
Align Left
Align Center
Delete Heading