Sydney Scobee’s consistency in the net keeps Gophers on top

The senior transfer has been a brick wall between the pipes for the No. 1 Gophers this season. 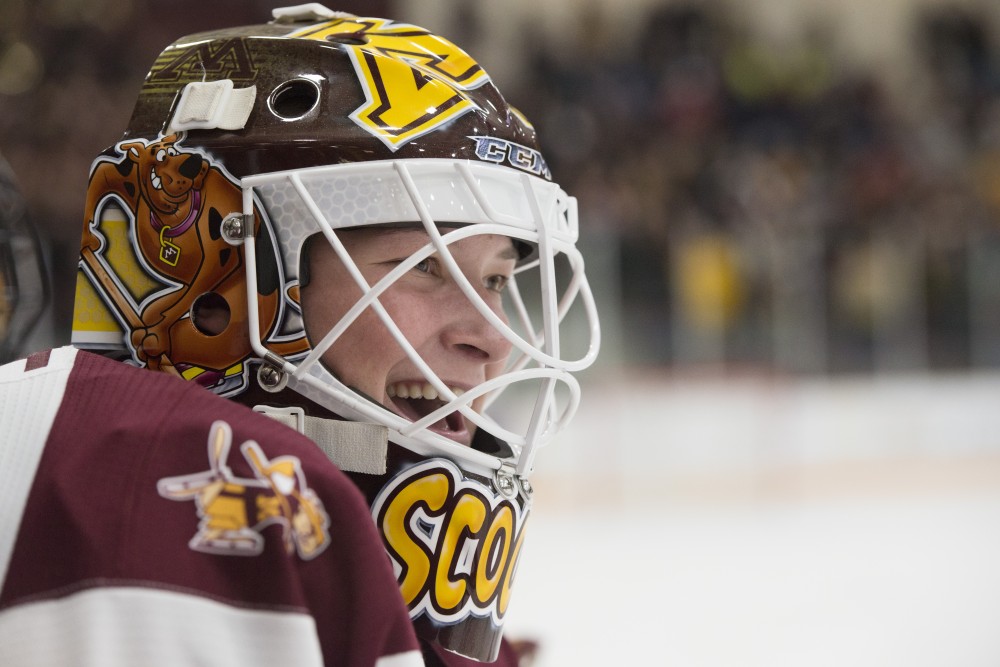 Goaltender Sydney Scobee smiles from the bench at Ridder Arena on Saturday, Feb. 2.

The Minnesota Gophers women’s hockey team is currently sitting atop of the NCAA rankings. One of the critical cogs to their success this season stems from the success of Sydney Scobee, their trusty goaltender.

Scobee has a .853 winning percentage this season and has a solid .940 save percentage through 18 starts. She also recently won the WCHA Goaltender of the Month in November.

Before being the starting goalie for the storied University of Minnesota women’s hockey program, Scobee started playing the game of hockey at a very early age in Minnetrista, Minnesota and followed in her siblings’ footsteps by becoming a goaltender.

“I have two older siblings. They both play hockey. My sister was a goalie, and that inspired me to be just like her,” she said.

Scobee relishes the fact that goaltending is a unique position on the ice and craves the pressure of having the odds against her to stop breakaways or two-on-ones.

By the time she was in eighth grade, Scobee was part of the 2011-12 Class A women’s state hockey champion Breck Mustangs.

“I definitely wish I could go back, because I would’ve taken it in a little bit more since I was so young, but it was an amazing experience nonetheless,” she said.

During her collegiate freshman and sophomore years, Scobee played 1,300 miles east of the Twin Cities at the University of Vermont. As a sophomore, she was named the Most Valuable Player of the Catamounts team and posted a .923 save percentage. One of her main reasons for coming back home to Minnesota was to play in the WCHA, one of the most competitive conferences in the country.

“Probably one of the main things that struck me while I was at Vermont when we came over to play Minnesota with all my family here and the large campus [was] it would be a nice change of pace,” she said. “I wanted to come back home, and Minnesota replied right away and brought me out for a visit, and I fell in love with the program and the coaches. Knowing a lot of the players also made the transition easier as well from past experiences playing hockey in high school.”

Gophers head coach Brad Frost said Scobee’s willingness to be vocal with her teammates and her ability to keep games within reach allows the potent Minnesota offense a chance to score.

“Her consistency has been a huge help to our team this year. We know what we are going to get from her each night and can trust her to hold the fort and keep us in the game. I remember her from when she played at Breck in high school and knew she won some great battles out east in Vermont, but you never know what you are going to get in particular with a goaltender,” Frost said. “Fortunately, she’s been everything we as a coaching staff have wanted and more. We’re really glad she’s here.”