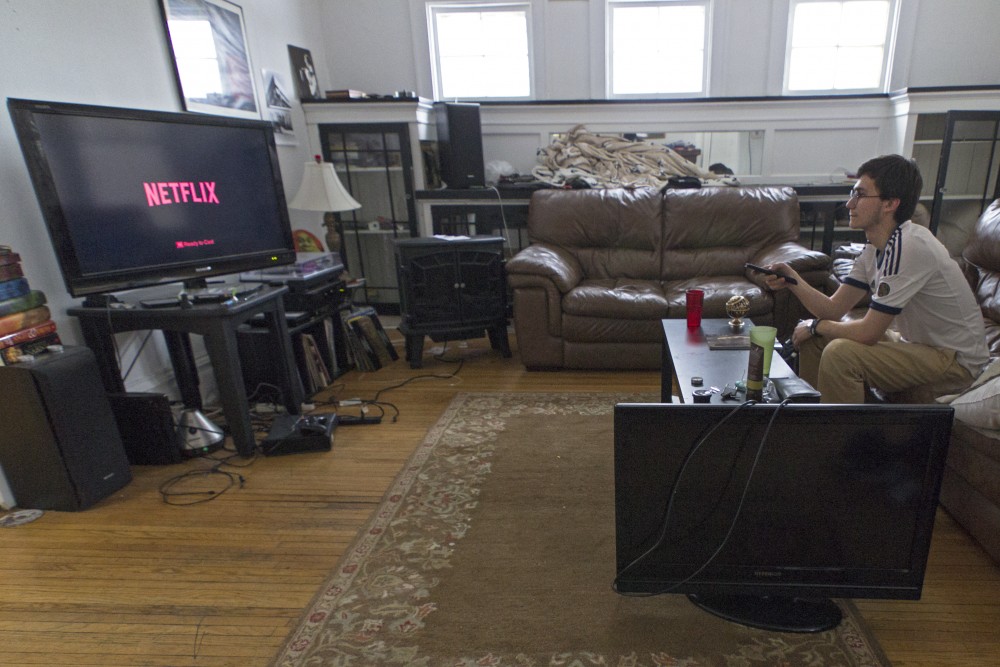 Isaac Cuellar sits down to watch Netflix in his home on Monday, March 5.

Strategic communications freshman Grace Becker was overjoyed Monday, when her class let out early because of the snow. Becker used the opportunity to binge-watch another three episodes of her latest Netflix addiction, “The OA.”

In a 2015 study by Deloitte, 70 percent of Americans said they binge-watch TV shows. But this habit may pose health concerns, according to a new study from the University of Minnesota.

People who watch TV “very often” were more likely to develop blood clots in the deep veins of their legs, which can be fatal, the study says.

Venous thromboembolism (VTE) can travel through veins and lodge in the lungs, which can cause serious health complications, according to the study. Between 60,000 and 100,000 Americans die from VTE annually, according to the Centers for Disease Control and Prevention.

Prolonged TV watching can increase the likelihood of developing VTE because it’s harder for blood to return to other parts of the body due to continued sitting, said Yasuhiko Kubota, a chief physician at Osaka Medical Center for Cancer and Cardiovascular Disease who was a graduate student at the University when he co-authored the study. The blood can pool in the veins, which causes blood clots, he said.

Maintaining a healthy body weight and getting an adequate amount of exercise aren’t enough to prevent the blood clots, he said.

“Even though people achieve the recommended physical activity during daytime, they may have a higher risk of VTE if they watch TV for a long time during [the] night,” Kubota said in an email to the Minnesota Daily.

TV viewing is the most common sedentary behavior in the world, the study says. The risk of VTE is the greatest for adults over the age of 60, according to the American Heart Association. Once someone experiences VTE, they have a higher risk of developing it again.

Younger people can still be affected by these hazardous blood clots, especially cancer patients or those who are obese or pregnant, Kubota said.

While some University students admit to binge-watching regularly, they say they aren’t worried about developing blood clots as a result.

Kubota said the best way to prevent blood clots is to remember to move around while watching TV.

“I think it is a good thing to enjoy watching TV. I also like to watch TV, but I would recommend people to move their legs once [an] hour during watching TV,” he said.