Kaler on Coffman renaming: ‘We need to use judgment and careful consideration’

The Minnesota Daily sat down with President Eric Kaler on Thursday to talk dorm pricing, sanctuary campuses and calls to rename Coffman. 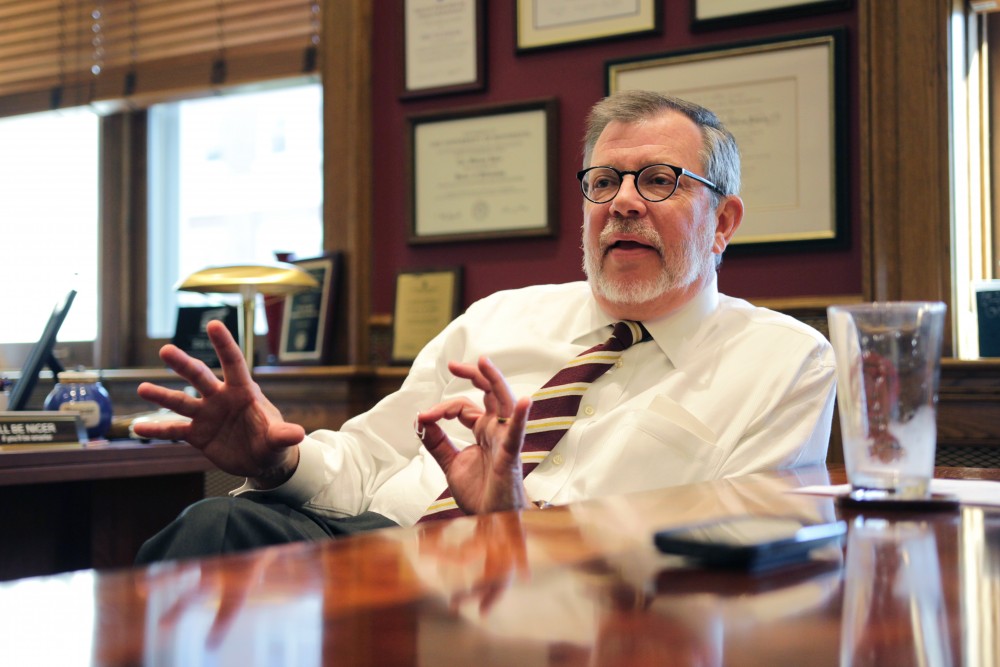 The Minnesota Daily sat down with University of Minnesota President Eric Kaler Thursday afternoon for the semester’s first monthly interview on topics that concern students.

The University … released the new P.J. Fleck ice cream [this month], and we were wondering if you had tried it?

I did try it, in fact. We had some at Ag and Food Day where we bring [agricultural] leaders together … [It] was tasty. It’s got a lot going … for it.

With all these new luxury apartments popping up and some being proposed [for building] right now, is there a possibility that this could affect dormitory pricing?

It won’t affect dormitory pricing because we’re not in the business to make money off of our dormitories.  Dormitory pricing is driven really by two things. … One is the inflationary pressures that we feel because of salaries and materials and utilities and all the stuff that goes into making the dorms work. And then all of the dorms are also self-financed, so for example, we’ll take on debt to refurbish Pioneer Hall, which we’ve been doing. That debt service is then covered by the fees that students pay for dormitories, so this year, the dormitory fees went up for two reasons. One was the inflationary pressures and the other is the debt service for Pioneer Hall.

Is there a possibility that dormitory prices might rise next year?

Almost certainly they’ll rise, unless inflation is zero, which I don’t think it will be.

The Trump administration recently announced they would be revoking [Deferred Action for Childhood Arrivals] unless Congress takes some form of action. Does this change your position on establishing the University as a sanctuary campus?

No it doesn’t. I’m very disappointed in the president’s decision around DACA, and I’ve issued a statement about that. I’m disappointed from the point of view of human toll it takes on our DACA students, and I’m also disappointed because of the effect it will have on the economy of the state of Minnesota. … But again, … given the operational rules that [U.S. Immigration and Customs Enforcement] uses about immigration issues that currently do not involve immigration actions on college campuses, I’m comfortable that our students are safe here.

Moving on to your 2018 capital request, when I read over it I had noticed you had simplified it down to three items, one … for [Higher Education Asset Preservation and Replacement] … The second was the Greater Minnesota Renewal … as well as a renovation for Pillsbury. Was there a strategic reason why it was simplified only to three [items]?

We had a good, productive conversation with legislative leaders, and their indication very clearly was that if there is a bonding bill next year, it will focus on repair of what we have already in Minnesota and not on building new things. So all three of those are really directed at maintenance of existing infrastructure. HEAPR is always our first priority; it’s important to maintain what we have .

What is the likelihood of the University receiving the [$234.5 million] request?

There’s a new exhibit in Andersen [Library] that really details the discriminatory … and racist policies and actions of former University officials, including former President Coffman. What was your reaction when you learned about this side of the U’s history?

Well, I was disappointed to learn about that side of the U’s history. I wasn’t aware of some of the findings that the historians have turned up. It’s good scholarly work, and as you probably know I’ve asked the Dean of the College of Liberal Arts John Coleman to lead a group of scholars to advise us on what next steps we should take in reaction to learning about this past.

And so in light of this new information coming out, some have called for the renaming of the Coffman Memorial Union. … What factors would be considered as part of a discussion to rename University buildings?

That’s one of the things we’re going to ask this group of scholars to think about. I think at first blush obviously it’s the total impact, the weight of accomplishments that an individual provided to the University. Many of those accomplishments are positive, of course. But then we need to use judgment and careful consideration and balance between the good things that were done and the things that were not appropriate.

How likely would it be that it’s changed?

It’s premature to … give you a betting line on that.

My next questions come from the investigation of Randy Handel, a University of Minnesota athletics official, and the recently concluded investigation that came up inconclusive. What were your thoughts on this outcome? [Clarification: This summer, information regarding a confidential Board of Regents review of sexual harassment allegations against Randy Handel was leaked to a media outlet. The Board launched an internal investigation into the leak.]

So can you explain some of the reasoning for conducting this investigation in the first place?

Some people have criticized the use of public money to fund this investigation. … What is your response to those critics?

I think the Board has the right to carry out an investigation in a situation like that, and it was appropriate to use University resources to do that.

Editor’s note: This Q&A has been edited for length and clarity.