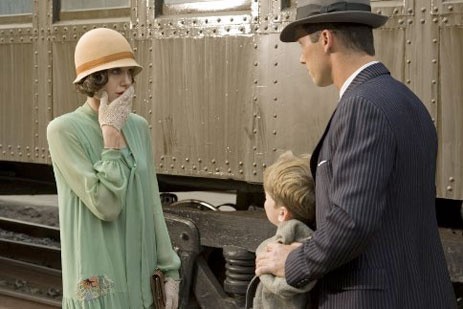 âÄúChangelingâÄù Directed by: Clint Eastwood Starring: Angelina Jolie, Gattlin Griffith Rated: R Showing at: Area theaters Clint EastwoodâÄôs âÄúChangelingâÄù is one of those movies that seems to be begging for an Academy Award. It has all of the elements frequently seen in Best Picture recipients: ItâÄôs by turns dark and smart, mysterious and brooding, beautiful and bleak, not to mention itâÄôs directed by Hollywood nobility. But what it misses, unfortunately, is a hearty interaction between its actors, and for a movie so monstrous and bold, this omission leaves the viewer feeling cold. âÄúChangelingâÄù is the filmic equivalent of sitting next to a drafty window. WhatâÄôs outside the glass is pretty and entertaining but it doesnâÄôt change the fact that youâÄôre shivering. Too much is happening in this âÄô20s throwback, which is based on a true story. Christine Collins (Angelina Jolie) returns home from work to find her 9-year-old son missing. A high-profile search ensues, and months later police claim they have found the boy. Enter the crux of the situation: They return the wrong kid. But the inept, crumbling powers-that-be attempt to persuade Christine that this new boy is in fact her son and that sheâÄôs the one whoâÄôs changed âÄî forgotten, obviously, who her child was. Police corruption ensues, and, like any good thriller, there are enough plot bumps and emotional plateaus to keep eyes open and hearts heartily pumping. Visually, the film is as plump and pretty as JolieâÄôs lips. The landscape is always barren, even when teeming with life, and the movieâÄôs color palette is bleaker than current economic forecasts. The actors all appear to be cloaked in heady shadows, as if each one is hiding some seedy secret in the voluminous darkness they wear. In the same way that the plot plays with the extremes between good and evil (Collins versus LAPD), the camera betrays an immense contrast between light and dark. ItâÄôs a world of sharp differences. Angelina Jolie is as gorgeous as a âÄô20s-style Betty Boop. She wears a brown coat with plush fur embellishments and is painted with stark bloody lipstick. This role proves that Jolie is an entirely effective drama-inflator when she screams, gasps or pleads for help. Malkovich is assertive and strong as the helpful preacher, but his role lacks nuance. Police captain Jeffrey Donovan and murderer Jason Butler Harner are equally evil and hissing, which makes things that much more fun. So whatâÄôs wrong with the show? Mainly two things: Even though Jolie, Donovan and Malkovich all morph into their roles, the interaction between them feels unrealistic. Standing separately, these three are effective, but when together thereâÄôs no life, no real chemistry. Jolie and company are just acting, and in a film so artful and dramatic, the distance between these characters feels massive. Only when theyâÄôre apart from one another do they seem human. The movie is well more than two hours in length, yet somehow the story feels rushed, as though Eastwood is pushing us through the unimportant formalities of telling a story only to get us to the dramatic pot of gold buried at the end of the rainbow. Even with these few great voids, âÄúChangelingâÄù packs power. The movie isnâÄôt mysterious or thought-provoking, but it is a smart thriller. *** out of five stars.