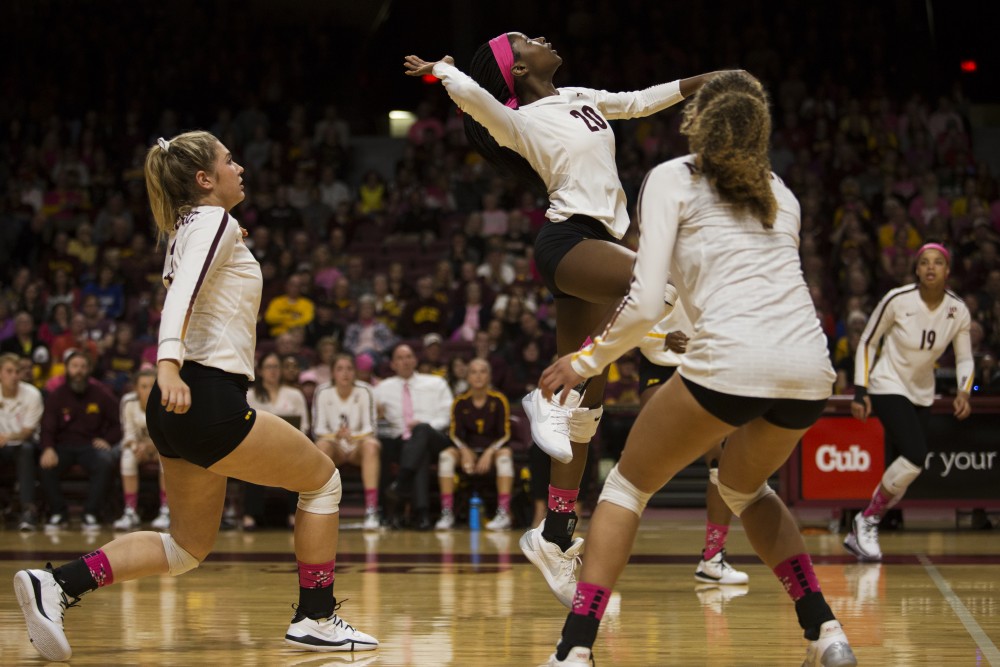 Freshman outside hitter Adanna Rollins jumps to spike the ball during the game against the Northwestern Wildcats on Saturday, Oct. 13. The Gophers beat Northwestern in all three sets.

The Gophers continue to roll and have yet to see the loss column in conference play.

“We talked before the match about defensive discipline and it seemed to have resonated,” McCutcheon said.

The Gophers began the match in dominating fashion as they opened the set with a five-point run that forced Northwestern to call a timeout.

After the break in the action, the Wildcats score their first point of the match. The Wildcats’ joy would be short lived as the Gophers continued their dominance and extended their lead to 13-4.

During the Gophers’ run, five separate players earned points. The Wildcats followed with a 4-2 run that narrowed the deficit to 15-8.

The Gophers allowed Northwestern to score just four more points in the opening frame as the home team won the first set 25-12. The first set was Minnesota’s largest margin of victory of the match.

Minnesota’s well-balanced performance was led by setter Samantha Seliger-Swenson, who set the ball 40 of the team’s total 45 in the match. The second set was a heavily-contested battle as Northwestern came with a spark of energy that gave them the opening point of the set and their first lead of the game.

The Gophers didn’t stand down, taking back a 5-2 lead in the set after three attack errors by Northwestern and kills by Rollins and Morgan.

From then on, the set was back-and-forth as the score eventually reached 9-8 in favor of Minnesota. Northwestern went on a two-point surge, but Minnesota shut it down quickly and went on a 6-1 run to widen the lead in the set to 18-13.

Unlike the first set, the Wildcats made it competitive until the end of the second. Minnesota still ended up with the 25-23 set victory. Offensively, Rollins led with five kills in the set.

In the third and final set, the Gophers again had a well-balanced attack effort.

Minnesota took a quick 5-3 lead after two service errors by the Wildcats and three kills by three different players.

The Gophers went on a 3-1 run and extended their lead to 8-4 after two defensive blocks. The sequence of events left the 5,600+ audience on its feet at Maturi Pavilion.

After that, Minnesota extended its lead to 14-8. The Wildcats came back with a streak of their own and scored four consecutive points and closed the deficit to two.

Minnesota did as it has all season and came back to score two straight points and shortly after close out the set 25-19.

Throughout the set, six separate players converted kills. Defensively four blocks were racked up.
“We just really focus on our side and I just think that our whole offense is really good,” Rollins said.

The Gophers will return to action Friday when they host the Iowa Hawkeyes.