More than 25 pianos filled the streets of Minneapolis during the month of June. 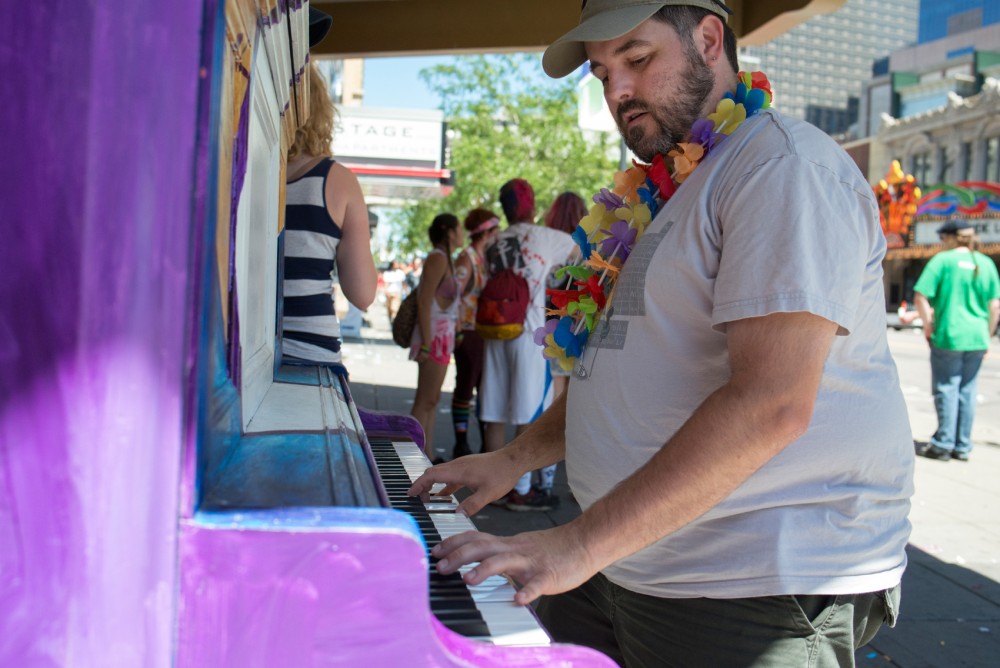 Matthew Stoffel plays on a public piano outside of the Brave New Workshop Comedy Theatre in Minneapolis after the Twin Cities Pride Parade on June 26. Stoffel has been playing piano since he was 3 years old.

At the Twin Cities Pride parade Sunday, Amanda Haspert sat down at a cat-themed piano.

“I literally only know ‘FrÃ¨re Jacques,’” she said as a festive crowd gathered around her.

“It’s all about trying it,” Haspert said as she started playing the famous French lullaby.

The piano, which was themed after the Minneapolis Internet Cat Video Festival, was one of 25 pianos placed across downtown as part of a public art program named Pianos on Parade. The project was produced in partnership by the Minneapolis Downtown Council, Minneapolis Downtown Improvement District and Keys 4/4 Kids. Local artists painted each of the pianos, incorporating Minneapolis landmarks, culture and icons into the designs.

“The pianos have been activated more than we hoped they would be. They are being played all the time, and it’s just awesome to be able to walk up and down the streets and see people that are playing the pianos and having fun, of all ages,” said Leah Wong, vice president of events and marketing at the MDC.

University alum Newill Hill, founder and current program and fundraising director of Keys 4/4 Kids, said he created Pianos on Parade as part of the Belle Plaine-based nonprofit, which accepts donated pianos and refurbishes them for later resale.

Proceeds from the Keys 4/4 Kids sales are then used to fund The Ellen Project, and Piano Placement — programs aimed at developing children’s learning through the arts. In addition, some funding goes to Pianos on Parade, he said.

“It’s all about using the arts, using these pianos that might not otherwise be used to help kids feel good about themselves,” Hill said.

Hill said he started Pianos on Parade in 2010 and modeled it after a similar project in New York City called, “Play Me, I’m Yours.”

After obtaining the program creator’s permission, Keys 4/4 Kids put out about 15 pianos in St. Paul, which were designed by artists and kids.

“It was a big hit. Everyone loved it, so we’ve been doing it ever since,” he said.

Wong said the MDC contacted Hill, encouraging him to bring the pianos to downtown Minneapolis this year.

“I thought, ‘Well for sure, let’s let Minneapolis have a crack at this,’” Hill said.

Along with Minneapolis Downtown Improvement District, MDC and Keys 4/4 Kids reached out to 21 local artists, asking them to decorate the pianos in accordance with their personal interpretations of Minneapolis culture.

“I loved the project, and I loved what it ended up doing downtown. It generated a lot of positive vibes,” Brockman said.

Other artists’ pianos featured Minnesota iconography such as the Mississippi River, the Stone Arch Bridge, First Avenue and Prince.

“There’s kind of that creative beauty aspect in having someone paint a piano versus just putting a piano outside,” Hill said. “Again, it’s another dimension of the engagement to the project.”

Lorie Line, a Minnesota Music Hall of Fame pianist, drew a crowd as she helped launch the program with a performance on the Mayo Clinic Square.

Former “The Voice” contestant and local artist Nicholas David also threw a pop-up concert as part of the program.

Jon Storm of Dallas, Texas, flew to Minneapolis, using the pianos as a prop for his latest music video. The video, titled “Undeniable,” was released June 24 and exhibits various pianos from the program and other Minneapolis landmarks.

Hill said this was the first time Keys 4/4 Kids used social media as a way to market the program, which he said made it more popular.

The MDC and DID encouraged piano users to share their experiences on social media as well, with the hashtags #PianosOnParade and #PlayDowntown.

As the pianos are set to be moved June 30, Hill is looking forward to the Aquatennial event, which he says will feature Keys 4/4 Kids pianos in the CenterPoint Energy Torchlight Parade.

“It’s all about opportunity and engagement, just giving the community an opportunity to create music to interact with each other. … You might not have a reason to say hi to somebody on the street, but if there’s a piano and you sit down and play it and someone comes over, it’s a great engagement tool for the community,” Hill said.