Joanne Eicher is the editor of a new fashion encyclopedia that explores styles globally. 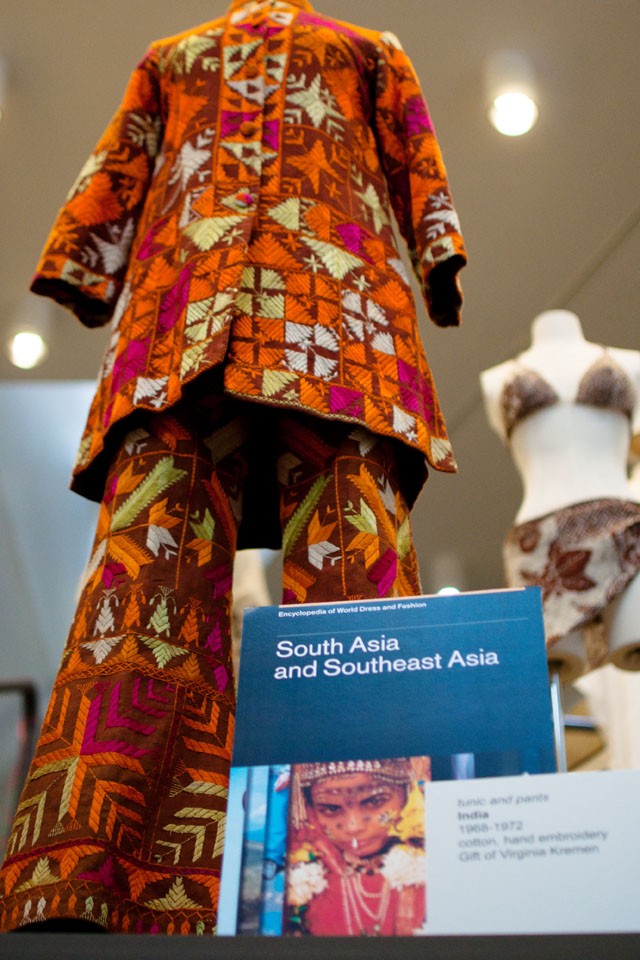 A dress from the South Asia and Southeast Asia Volume of the Encyclopedia of World Dress and Fashion is displayed in McNeal Hall on the St. Paul Campus.

After seven years of hard work and uncertainty, itâÄôs done âÄì the first-ever Encyclopedia of World Dress
and Fashion.
The 10-volume tome was printed in July 2010 and, as of last month, is available at any University of Minnesota library through online reference.
âÄúEverybody around the world gets dressed every day,âÄù Regents Professor Emerita Joanne Eicher said. âÄúHow and why we dress tells other people about ourselves and confirms to us our own identity.âÄù
The literature about dress and fashion that was available before the encyclopedia typically focused on the Western world, John Vollmer, president of Vollmer Cultural Consultants and editor of the East Asia volume, said.
âÄúWe talk about the rest of the world as if itâÄôs all âÄòregional dress,âÄô and somehow itâÄôs ethnographic and itâÄôs not quite as sophisticated as fashion, and thatâÄôs really just not the case,âÄù he said.
The effort started in 2003 when Eicher received a phone call from Routledge Publishers, which was exploring the possibility of developing a geographically organized encyclopedia for discussing the role of dress and fashion from a global perspective.
At the end of the call, Routledge Publishers offered Eicher a position as the projectâÄôs editor.
âÄúAnd the rest is not just history, but a saga of hard work and much cooperation resulting in over 700 articles from about 620 contributors,âÄù Eicher said.
Contributors, 40 of whom are University alumni or still with the University, agree that itâÄôs important to understand the different ways people dress themselves.
Eicher said the ways humans have dressed throughout history speak volumes about their identities, cultural changes or revolutions and social groups.
For example, in Japan, the traditional warrior class âÄî the Samurai class, which had its own unique style of dress âÄî existed until 1868, Vollmer explained.
âÄúThen there was a new emperor and basically a complete transformation of society,âÄù he said. The Samurai class was disbanded and, in order to have modern armed forces, the Japanese government allowed anyone to join. Officials no longer wore traditional Japanese garments, but switched to Western clothing because they were dealing with international relations.
Defining âÄòdressâÄô
The way people dress is often one of the first things others notice.
âÄúLook at the assumptions of people we make,âÄù Eicher said. âÄúWhen you travel around campus if you look at professors and students and so on you do sometimes make some quick judgments about who they might be.âÄù
For example, she added, male professors in Carlson School of Management often dress different from those in studio arts, partly because of what they do but also because of how they see creativity and identify themselves. The same is true around the world.
Eicher said that when speaking of âÄúdress,âÄù contributors are not simply talking about garments worn on the body.
âÄúSkin, eye and hair color vary along with the body build, but the body serves as an armature, a three-dimensional base for dress,âÄù according to Volume 10, âÄúGlobal Perspectives.âÄú
The word dress is used to denote things put on the body, or use to modify the body, but it also includes things one might add to the body itself, âÄúlike perfume, or makeup âÄ¦ things that extend the body; shoes and boots, hats, anything that we put on to create a persona,âÄù Vollmer said.
The encyclopedia was almost cancelled in 2005 when the original publisher pulled out of reference publishing, projecting low interest and sales.
âÄúNeedless to say, I was astonished, horrified,âÄù said Eicher, who decided to pursue other possibilities for publishing. In early 2006, Eicher contacted Berg Publishers who agreed to pick up the project.
The first nine volumes of the encyclopedia cover almost every region of the world from Africa to the United States and Canada, Latin America and the Caribbean and more. The final volume addresses global issues.
Vollmer said one of the unique aspects of the encyclopedia is that it was decided early to create an online resource, which will be updated twice a year.
âÄúMost encyclopedias get published, and within five years theyâÄôre starting to become out of date. Within 10 years they need to be revised totally,âÄù Vollmer said. âÄúI think [weâÄôve] created a kind of vehicle which will allow a continuing updating and expanding of the resource.âÄù