After five years, iPod staple artists puts out a pair of winners. 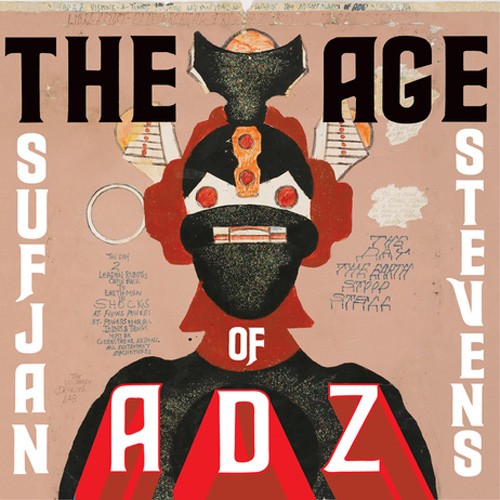 As much as we Minnesotans were hoping for a Sufjan album about our hotdish-infatuated state, âÄúThe Age of AdzâÄù proves to be a sufficiently satisfying substitute.

The first full-length LP since âÄúIllinoisâÄù abandons the elaborate, purely orchestral sound for heavy beat development and layered vocals. Throw a Casio in with his as-yet defined aesthetic, and you have âÄúAdz.âÄù StevensâÄô well-constructed instrumentals still exist, but are looped and restructured with his iconic utterance throughout, hitting home while still showing development between his ’05 release and now.

The albumâÄôs cautionary lyrics and neurotic, self-conscious song compositions make the hour-long album as engaging by the end as it is when started. Even the 25-minute-long âÄúImpossible Soul,âÄù with all its old Sufjan tricks, manages to stay fresh for its duration.

Working with Royal Robertson as his point of reference, paranoid schizophrenic elements come through with ease. âÄúI Want to be WellâÄù constrains the hopeful instrumentals with strict Postal Service-esque manic disorientation and Stevens moaning, âÄúIâÄôm not f***ing around,âÄù over and over into the mic. We get it.

If Stevens had stuck with the 50 states concept, we wouldâÄôve missed this accomplished and flexible work. Garrison Keillor can keep his hotdish.

Concept albums are great about 0.9% of the time âÄîparticularly when they have accompanying materials, which only the die-hard fan would cough up $50-60 to buy.

That being said, Antony Hegarty and his band have made it into that 0.9%.

âÄúSwanlights,âÄù the newest release from the group, has a supplementary text to flip through when listening to the tracks. Though oftentimes a listener can do without the extra flim-flam and still have a solid conception of the album, Hegarty has put his heart, soul and every type of journal or zine entry imaginable into the book.

In time with the music itself, the book follows the crescendos and decrescendos of emotion âÄî an impatient and violent attack on one page will relax into a sublime sketch within the next few.

Hegarty has the rare ability to knock any uplifting tune down a peg or two, and that happens enough on the album. But in âÄúThank You for Your Love,âÄù the repeated lyrical buildup reasserts the heartfelt and wrenching experience that love lends us from time to time, and averts alienating his established audience by jazzing it up a bit more than usual.

âÄúFlÃ©tta,âÄù literally “twist” or “braid” in Icelandic, has BjÃ¶rk and Hagerty entwined vocally until listeners are trapped in their looped affair. Their collaboration makes the most stubborn of hairs stand on end.

Antony and The Johnsons revive their almost-exclusively chamber pop sound on the title track, forcing listeners to question the optimistic beats that are evoked elsewhere. Hegarty exasperating, âÄúTonight tonight tonight,âÄù leaves us expectant and yearning, with terse smirks sneaking up on those who took the bright preceding tracks too literally. The singer has limitless dimensions when his Nina Simone crooning commences, and he doesnâÄôt fail to deliver the darkest sides of love with its most vibrant.