Around 100 gathered to hear female representatives before heading to cast ballots downtown. 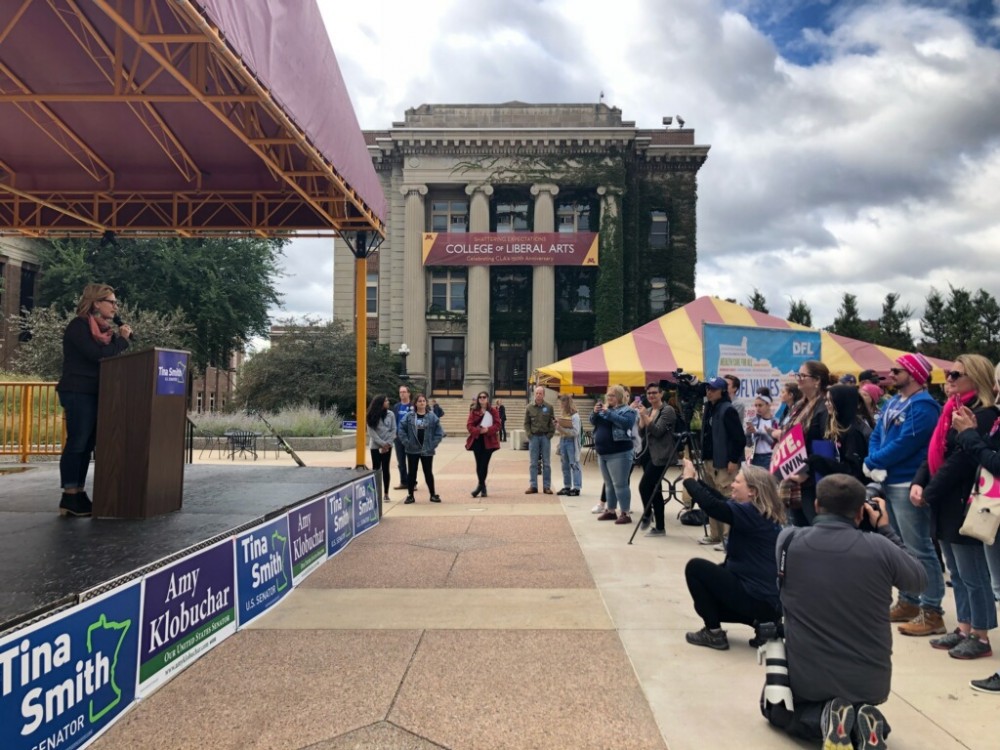 A speaker addresses a crowd of about 100 at the early voting rally on Sept. 21.

Led by Sen. Tina Smith, D-Minn., a lineup of female speakers hit the stage at a rally of around 100 Friday at Northrop Plaza to celebrate the start of early voting for the Nov. 6 midterm elections.

The rally centered around student turnout in the upcoming election.

“We had a great conversation with some of the organizers on campus. They have fantastic ideas about how to reach out to students,” Smith said in an interview. “We talked about how we need to have a big table where students aren’t just part of the process every election but they’re part of the decision making process that is ongoing, during the elections and when the elections are over.”

“How are you going to be able to figure out the life that you want when you leave this incredible institution buried with financial obligations that keep you from making the choices you want to make?” Smith said to the crowd.

“Students have abysmally low voting rates and right now we can be the most influential voting block,” University sophomore Sammy Lett said.

Flanagan brought up her background as a University student while addressing the crowd. She said college was where she first became politically active and encouraged students to do the same.

“There is a place and a space for your voice,” Flanagan said.

Cortez Masto stressed the importance of early voting. She also touched on her work in the Senate with Smith and Sen. Amy Klobuchar, D-Minn.

During the rally, an audience member shouted “Kavanaugh” in reference to the upcoming Senate vote on the nomination of Brett Kavanaugh to the U.S. Supreme Court.

“I am a no vote for Brett Kavanaugh,” Smith responded. “I just want to make that clear.”

Smith, a former executive at Planned Parenthood, spoke about women’s healthcare access before giving the stage to Richards.

“We’re making history everywhere, and that’s what they’re afraid of in Washington,” Richards said. “We have to make sure Smith stays in Washington D.C.”

After the rally, students were encouraged to take the light rail to the Early Vote Center in downtown Minneapolis to cast their ballots.

“Voting early is easy. And life is complicated, you never know what you’re going to be doing on election day, why worry about it?” Smith said. “Just vote now and you’re done.”