The team finished first in the A Division of the Laker Showdown, which ended on April 1. 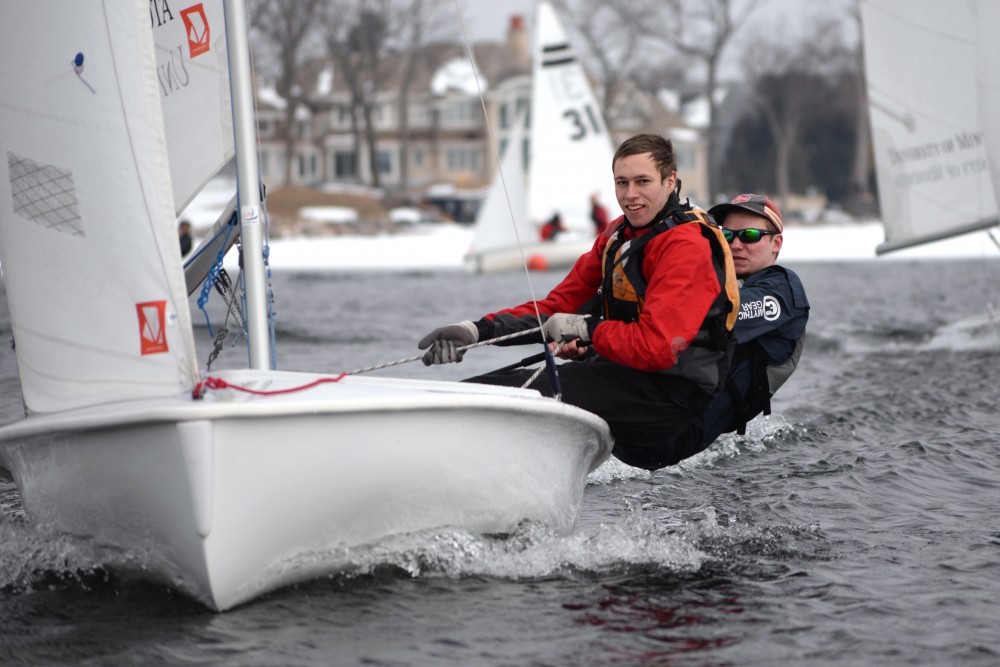 The club sailing team calls it a bubble.

It’s a small space surrounded by ice right by the dock that’s big enough for their boats to sail on. With Minnesota’s late winter, the team has gone back and forth in that small pocket of water, practicing fundamentals on Lake Minnetonka.

Though the team’s season is underway, commodore Bailey Adkins said it’s tough to sail in cold and snowy conditions. The club took a trip to Florida during the University’s spring break in April to prepare for the season.

“It’s hard enough as it is to keep up your sailing skills in the winter towards the springtime in the midwest because there’s no way to do it,” Adkins said. “It’s hard to get people motivated to get out and practice, especially when there’s not a lot of space to be sailing. People think it’s pretty ridiculous that we’ve been sailing at all since its been snowing.” The club team, however, is still able to compete in Midwest regattas during the cold weather.

The club recently competed in the Laker Showdown, an event in Holland, Michigan. They finished first in Division A after coming in ninth place at the same regatta a season ago.

The team competes in the Midwest Collegiate Sailing Association, and it has since it joined in 1981. In 1998, Minnesota was reorganized as a club team.

Typically, sailors do two races in a row, which is called a set. Sophomore Cassandra Trask said, because of this, resilience is an important character trait sailors should have in all weather conditions.

“You have to make sure you don’t get frustrated,” Trask said. “If you have one bad set or one bad race, you can’t get frustrated with yourself or the other people on the boat because … that would ruin your regatta for the rest of the day.”‘ The team practices at the Wayzata Community Sailing Center. The center is about 16 miles away from Coffman Memorial Union. Once they’re there, they set up the boats on the lake and the team practices for a couple hours before driving back.

Adkins said she has been sailing since she was 10 years old. She runs the sailing program at Camp Olson YMCA in Longville, Minnesota where she learned the sport she still practices today.

“I wanted to be able to sail in college and see what that environment was like because it’s a cool thing that the U has that,” Adkins said. “I emailed the coach and came to the first day of practice. I’ve been on the team ever since.”

“I met a lot of great people that introduced me to the competitive team here [at Minnesota],” Luterbach said. “We hang out together. It’s a lot of fun and my instant friend group.”

Minnesota competed in its first regatta in 1999. Since then, the team has had to face the water in harsh conditions to race against other schools.

“It’s not the most comfortable thing, but it’s very Minnesotan,” Luterbach said. “It brings out our true character.”

Jack White contributed to this report.