The Minnesota Daily • May 7, 2013 • https://mndaily.com/219539/uncategorized/u-student-dalluge-shows-balance-bodybuilder/

Jordan Dalluge will compete in an amateur show this Saturday. 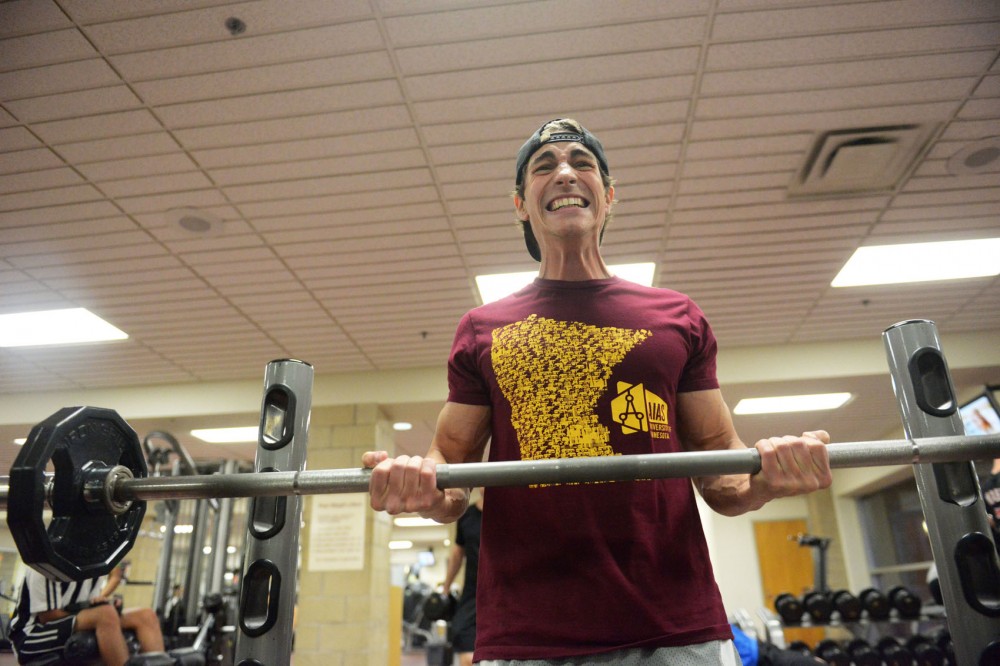 Architecture junior Jordan Dalluge lifts Monday, May 6, 2013, at the University Recreational Center. Dalluge has been training since September for the Mr. & Ms. Natural Minnesota Bodybuilding show in Bloomington on May 11.

Tim Dalluge once issued a challenge to his son in the form of a yellow Post-it note stuck to the refrigerator.

That was nearly eight years ago. Jordan Dalluge, now a University of Minnesota architecture junior, was 13 years old and had just started lifting weights.

That Post-it note — a little more weathered and a little less adhesive now — still hangs on the refrigerator in the Dalluge household.

It has aged but so has Jordan.

Jordan Dalluge muscled up five reps at 135 pounds to win the bet and has steadily increased his bench press since. He’s following the footsteps of his dad and uncle, who have competed as amateur bodybuilders, and he will compete at the Mr. & Mrs. Natural Minnesota show May 11 — an all-natural bodybuilding show in Bloomington, Minn.

Tim Dalluge competed as an avid amateur bodybuilder in the 1980s. His brother, Jordan’s uncle, is a current power lifter at the amateur level.

“It’s been a big part of my life, so Jordan has always seen it,” Tim Dalluge said. “It was something he was kind of destined to do at some point.”

He said his son had a perfect physique for the sport — a symmetrical body makeup with “diamond calves to match since the day he was born.”

Though he had the build, Jordan Dalluge said he didn’t grow passionate about lifting until his junior year in high school. He said that even then, he never saw himself as a bodybuilder.

He wrestled for Mankato West High School and didn’t spend as much time lifting in season as in the offseason. He wasn’t an exceptional wrestler for Mankato West, but he looked the part.

“He had kids that told him if he wrestled like he looked, he’d win every match,” Tim Dalluge said. “He always had the right build. He would intimidate the hell out of some kids.”

Jordan Dalluge excelled in his senior year of wrestling, but he never garnered any scholarship offers from major programs.

So he decided to hang up the singlet and attend the University of Minnesota.

His wrestling career ended with that choice, but his amateur bodybuilding career was about to begin.

Dalluge said he has always had a love-hate relationship with weightlifting since he started to lift more as a junior in high school.

He said there were stretches when he wouldn’t miss a workout for two months and then he’d hit a plateau and avoid the weights for weeks at a time.

“I didn’t really start taking it real seriously until freshman year of college,” he said. “I started college, and I got unlimited food in the dorms. That was my motivation to stay healthy and work out more.”

He said instead of gorging on the buffet-style dorm food like many freshmen, he strategically pieced together meals that kept him healthy and maximized his protein intake.

Dalluge said he wanted to enter the Gopher State competition — a statewide meet for bodybuilders — in high school.

“I always thought I could compete with those kids … and I probably could have done pretty well at the teen division, but I never really got around to it,” he said. “I turned 20 and then you’re competing with all those guys that are steroid-ed out.”

Tim Dalluge pushed his son to compete in competitions from an early age but said his son never seemed to latch on to that type of competition in high school.

“I wouldn’t say he had the drive I had at that age, but he had his priorities in line,” Tim Dalluge said. “He had his school studies, whereas I was kind of living and eating bodybuilding at his age.”

Jordan Dalluge began to prioritize bodybuilding more this year after watching the movie “Pumping Iron” with a few of his buddies. The movie chronicled the lives of amateur and professional bodybuilders in preparation for the 1975 Mr. Olympia and Mr. Universe contests.

He said that was all the motivation he needed.

He has watched the movie countless times, and the impact has always been the same for him.

“It is the biggest inspiration for any aspiring bodybuilder or any athlete trying to put on muscle [to see those results],” he said. “It’s a thing where a girl will tell you that it’s not attractive at all, but for a guy it’s like, ‘I don’t even care. I just want to look like that.’”

Dalluge and a couple friends formed a coalition to attack the weights after they watched the movie. He said they planned to enter the Gopher State at first but then thought better of it.

“We didn’t really want to get embarrassed by the guys that use steroids, so we figured we’d have a better shot at the all-natural show,” Dalluge said.

Aaron Callister is the main promoter for the Mr. & Mrs. Natural Minnesota show, which Dalluge and his friends will compete in.

Callister said the natural side of the sport has started to take off at a state and national level in the past few years.

“I had 198 competitors last year in my show, and that’s the biggest show ever in Minnesota,” Callister said. “I [had] double the entries that the non-drug-free shows get. There are just more people interested in staying natural.”

Dalluge and his friends are a part of the growing group of natural bodybuilders. The sport has become a passion for Dalluge, but he said ultimately it’s for fun.

“It’s a lifestyle … but right now I’m not letting it control me,” he said. “It’s not about the end result and coming in first at all.”