Freshman trio comfortable on the ice together 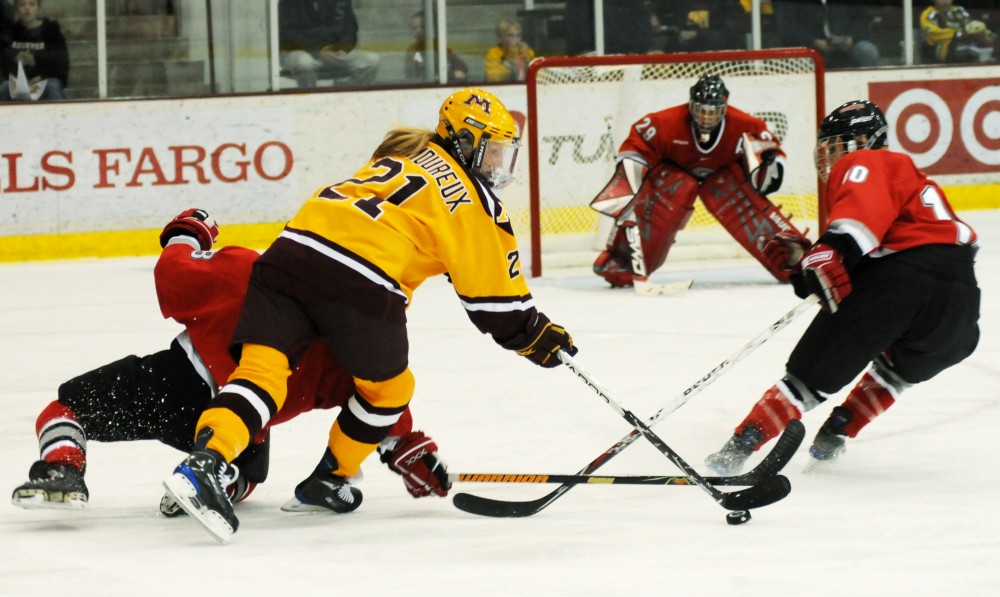 Freshman Monique Lamoureux closes in on the Ohio State goaltender in last weekends series against the Buckeyes. Lamoureux along with her sister Jocelyne and freshman Sarah Erickson have a strong bond that has helped the trio to a successful start to the season.

After combining for 12 points this past weekend against Ohio State, the line of first-years Sarah Erickson and Jocelyne and Monique Lamoureux look like they have been playing together for years. They have. The three have known each other since they were ten years-old when they played together during the summer and have been good friends ever since. When asked how long theyâÄôve known each other, Erickson and Jocelyne said, at the same time, âÄúa long time.âÄù Even though they met in 2000, the trio didnâÄôt start playing on the same line until 2004 when Jocelyne and Monique moved up to forward and Erickson joined their line. Both Jocelyne and Erickson said the three dominated the competition when they started playing together. Monique said Erickson fits in with the bond that the twins already have. âÄúWe were joking the other day about how [Erickson] is kinda like our triplet,âÄù Monique said. âÄúJocelyne and I obviously know where each other are going to be and she complements us well and knows how to play with us.âÄù Monique said itâÄôs an advantage to have already played on a line together. âÄúItâÄôs a good starting point since you donâÄôt have to go through the stage of getting to know how every player plays,âÄù she said. âÄúWe are all similar but we all have key things that we are good at that complement each other.âÄù The three didnâÄôt talk about going to the same college, but after Jocelyne and Monique committed, Erickson phoned them to ask if they were serious about going to Minnesota. âÄúI called them before I committed and was like âÄòso this is legit?âÄôâÄù Erickson said. Coach Brad Frost said everyone knew the Lamoureux twins were going to be a packaged deal. Once they committed to Minnesota, the Gophers were looking for one more forward and Erickson was the best in the state. The three were excited to once again play on the same team and hoped to play on a line together. Frost said that it wasnâÄôt necessarily the intention to put those three on a line together. He knew that Jocelyne and Monique would be together because they have a good sense of where each other will be on the ice but was unsure who would be with them. âÄúSarah seemed like a good fit and theyâÄôve been clicking ever since,âÄù he said. The line has scored a combined nine goals and 18 assists in six games, more than any other line. The chemistry off the ice is just as strong as the three also live together with fellow first-year Kelly Seeler. Monique said they talk at home about what they need to work on and will sometimes stay after practice to work on things as a line. âÄúItâÄôs fun because you can talk about stuff when you get home and just chat,âÄù Erickson said. âÄúWhen you live together you get to know them more than you already do.âÄù Senior captain Melanie Gagnon said she canâÄôt remember the last time a line has been made up of all first-years. âÄúLike we said at the start of the year, with all of our freshmen coming in with their international experience, we knew that they were gonna help us out right away,âÄù Gagnon said. âÄúThis is a perfect example of three freshmen stepping into a major role and generating quite a bit of points for us.âÄù