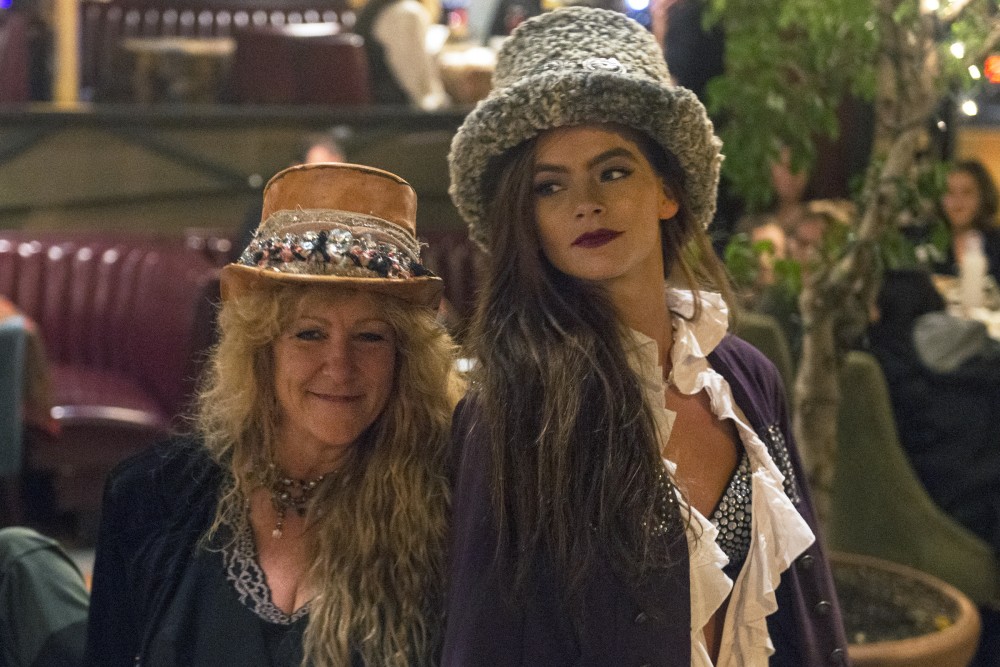 Designer Shelley Wade walks with a model at the end of her show at the Loring Pasta Bar on Oct. 30, 2016. Wade's creations have a Gypsy influence and were originally intended to be shown to Prince in a private show.

Upstairs, the moody Red Room was filled with models in open coats and top hats ordained with frills, beads and lace.

The show’s coordinator yelled directions at models, telling them when to turn, when to walk and to smile at the women — not the men.

Despite always having an interest in the field, Wade is new to the fashion game.

“I’ve been a day care provider for the last 30 years,” Wade said. “[Fashion] was a dream, but I didn’t know how it was going to happen.”

This doesn’t mean that Wade is new to the creative industry.

“I’ve also been a professional drummer for the last 30 years, so that’s where the rock star look comes from,” she said.

Indeed, the collection looks like it could have come from the closet of Stevie Nicks, Wade’s idol.

“I think every woman should feel like a rock star,” Wade said. “The whole point of the fashion show is to let women buy an affordable designer coat. The prices range from $100 to $800.”

When Wade saw the coats on the models the first time, she was stunned.

“I felt like I was going to cry — I actually made my dream come true,” she said.

Wade’s design process is as pure as her intentions. Saturday was her first show, so she had no idea what the audience reception would be.

“I’ll make what I love and hopefully other people will like it too,” she said.

Luckily for Wade, the audience was pleased with the rock star look.

“Amazing. Beautiful. We loved them,” said audience member Lisa Larkins of the hats and coats.

Wade’s family was in attendance at the show.

“It makes me wish I was 20 years old,” said her mother, Trish Stelten.

Having seen the work that went into each coat, Stelten had a heightened appreciation for her daughter’s show.

“She would start with a jacket and work on it for months,” Stelten said of Wade’s creative process.

The shows’ models respected Wade’s vision as well — all twenty to thirty volunteered to walk the show without pay.

University of Minnesota elementary education foundations alumna Karlee Callender was one of models.

“I really like [the coats] because they’re unique,” Callender said.

Wade made each coat individually with randomly found materials. Even if a customer wanted it, she couldn’t reproduce any article of clothing exactly.

This reinforces Wade’s empowering vision for the coats: each one is an individual, just like the rock stars that wear them.

Wade was so enamored with the show that the economics didn’t matter.

“If no coats sell, it doesn’t matter because seeing the coats on the models is just like a dream,” she said.