The final proposal would provide less than 13 percent of the University’s requested $147.2 million budget increase. 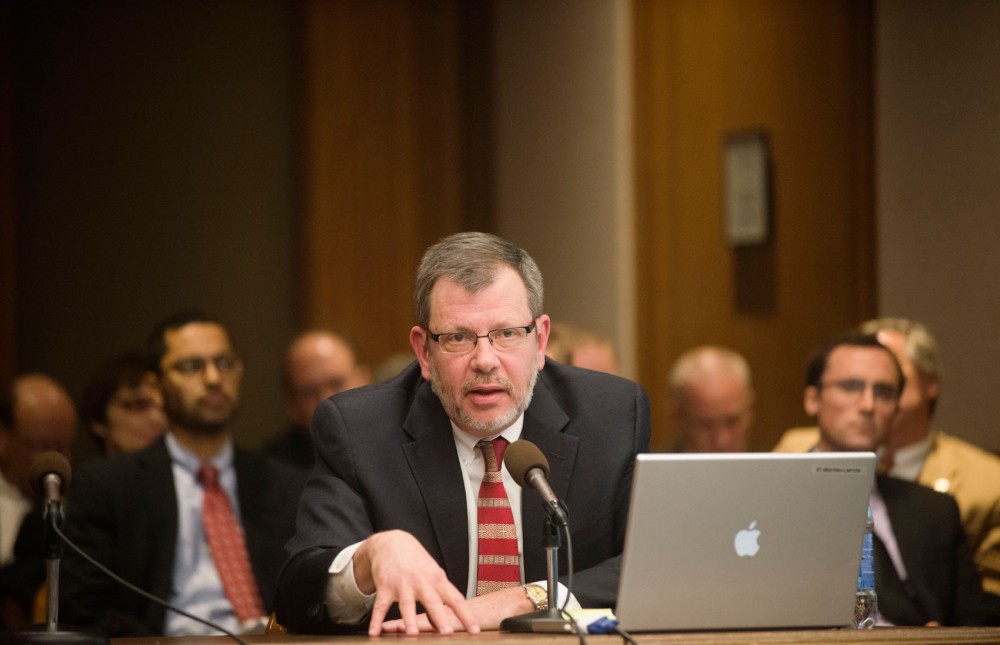 University President Eric Kaler presents during a meeting on March 12, 2013, at the Minnesota state Capitol.

The Minnesota Legislature’s spending final funding plan for the University of Minnesota is less than 13 percent of its request and less than what the Senate and House originally recommended for the school.

A final higher education omnibus bill, which included $18.6 million of the University’s $147.2 million requested increase, was approved by a conference committee Monday afternoon after a week of negotiations between the House and Senate proposals.

Originally, the House recommended the University be allocated $22 million of its request, while the Senate pushed for a $29.6 million increase.

In a press release Monday night, University President Eric Kaler said the bill is disappointing for the school — and Minnesotans.

“This level of funding means students will pay more, research initiatives will be compromised, and our contribution to Minnesota will be lessened,” he said in the press release.

Some DFL lawmakers say they’re concerned over the impact the proposals made by a Republican-controlled Legislature may have on higher education.

“We’re looking at a bill that … is going to raise tuition four to five percent at the University of Minnesota,” said Sen. Greg Clausen, DFL-Apple Valley, at the meeting.

Gov. Mark Dayton previously said he would veto the Legislature’s higher education omnibus bill unless it came closer to his $96.8 million recommended increase to University funding.

A policy that would penalize the University if it didn’t make it student services fee optional was also included in the bill. The measure has been opposed by many student leaders across the University system.

The fee funds student groups and student services like Boynton Health, the Aurora Center and the Minnesota Daily, which receives some of its funding from the fee. This school year, the mandatory fee was $432.18.

The measure’s author, recent University graduate Rep. Drew Christensen, R-Savage, has said the purpose of the policy is to reduce the cost of a college education, especially for students that can’t or aren’t interested in participating in groups or using services funded by the fee.

Researchers would also be required to get legislative approval to conduct fetal tissue research.

“I would say in its current form, I … would encourage the governor not to sign off on it,” Clausen said in an interview.