Most used pedestrian bridge in Minnesota set to be rebuilt

The Fifth Street pedestrian bridge in Marcy Holmes will be replaced to fix safety and structural issues. 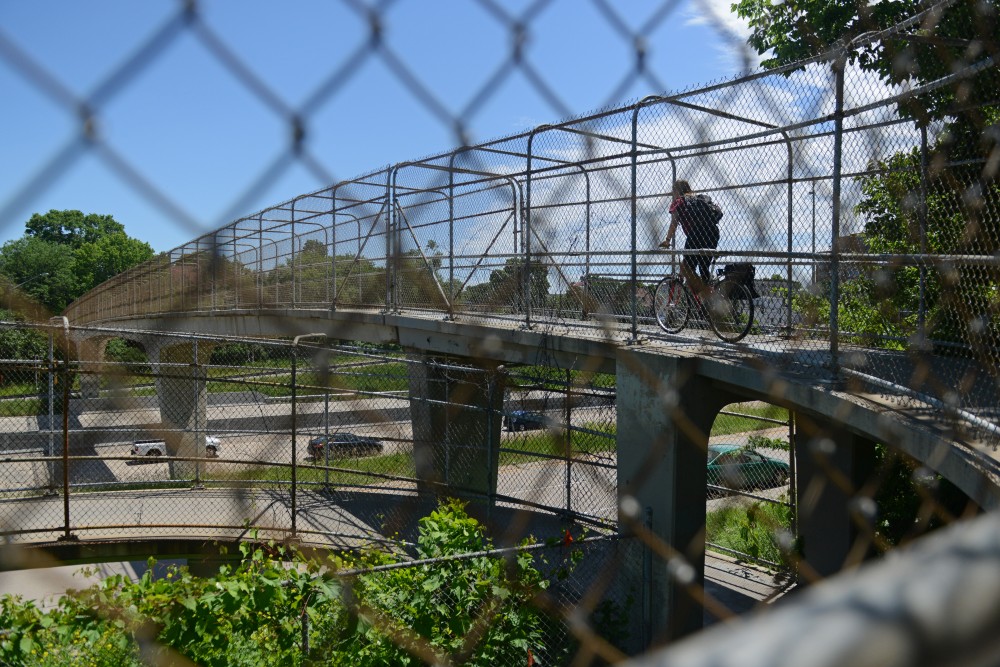 The 10th Ave SE walking bridge is seen on Wednesday, June 21, 2017. The bridge, used to cross 35W by cyclists and pedestrians, will undergo renovations in Spring 2018.

A heavily used pedestrian bridge that spans I-35W in the Marcy Holmes neighborhood is set to receive a much needed change.

State officials will rebuild the Fifth Street Bridge, a popular trail for residents and University of Minnesota students alike, with federal money amid community safety and structural concerns.

Ken Slama, project manager for the Minnesota Department of Transportation, said the community has pushed for updates to make the bridge more accessible, especially given its status as the busiest pedestrian bridge in the state of Minnesota.

The total cost of the new bridge is close to $2.7 million, 80 percent of which will come from federal grants, while the rest will come from MnDOT, Slama said.

The project will create a new bridge next to the existing Fifth Street Bridge.

Unlike the current bridge, the new version will fit with Americans with Disabilities Act guidelines, as well as include better lighting and structural components.

“Our main concern is that the current bridge is not wide enough to make it ADA accessible,” said Marnie Lovern-Bell, member of the Visual Quality Advisory Committee and longtime resident of Marcy Holmes.

Slama said the northwest entrance, with its inclined spiral, is not suitable for ADA rules.

The way the bridge stands now also poses structural issues, as the concrete ages and other aspects of the bridge degrade.

The current bridge does not meet standard regulations with a width of only 10 feet, but will be increased to 14 feet to let bikes pass each other, Slama said.

Another glaring error in the current state of bridge is it lack of lighting, making it a likely spot for crime at night, he said.

Department of Transportation Bridge Architectural Designer Melissa Schultz said while lights are needed and provide a sense of safety, city ordinances must be considered.

Renovation plans began in 2014 as the community expressed concern over the state of the bridge and now almost three years later the designs are being realized as funding comes through. MnDOT’s plans for renovation beat out 31 other organizations for the federal grants.

Construction is expected to begin in the spring of 2018 and last approximately six months.

Correction: A previous version of this article misstated the correct street name of the bridge. It is located on 5th Street Southeast.