The stand-up is performing his new hour, “The Persistence of Jokes,” at the State Theatre in Minneapolis on Saturday. 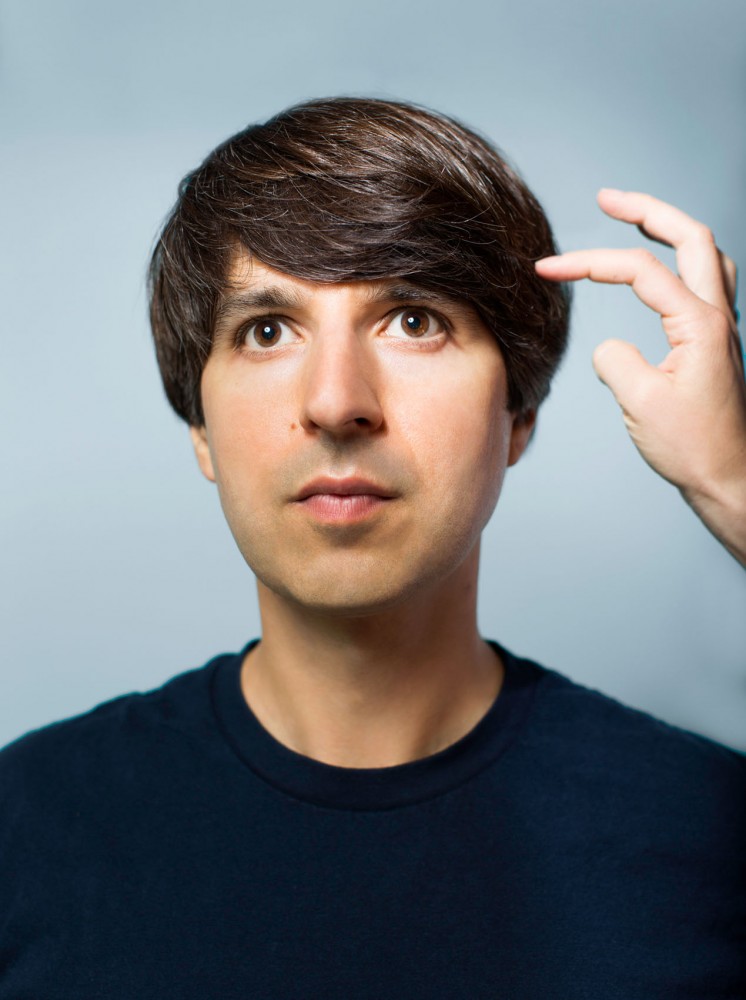 Comedian and palindrome-lover Demetri Martin is performing his new special, "The Persistence of Jokes," at the State Theatre on Saturday.

Despite his thirst for knowledge, standup comedian Demetri Martin knows to keep himself humble.

“A know-it-all is a person who knows everything except how for how annoying he is,” Martin quips in first book, “This is a Book.”

In his career, Martin has combined traditional standup with illustrations, music and even unicycle riding, which only makes sense coming from his palindrome-weaving outside-the-box mind.

In a 15-minute interview with Martin for his “The Persistence of Jokes” tour, the comedian snapped into introspection, saying he’s abandoning his multifaceted style for a simple, joke-only approach.

You focus on creativity — being innovative, thinking outside the box with concepts, whether it’s a drawing or a joke or a sketch. How important is creativity to you versus comedy?

I got into comedy because I wanted to make people laugh, so I think that’s the most important thing in comedy, just by definition.

Within that, for me personally, trying to be creative is really important because I think you have an opportunity when you’re up there performing, and if you’re lucky enough to have people come see you, you have to find a way to give them all that you can.

The idea of experimentation and innovation — I find it appealing. Just selfishly, I enjoy it because it keeps it interesting for me. If I can surprise myself, then I have a better chance of surprising the audience.

Were there any specific times when you surprised yourself so that you almost ‘gained a level,’ in a sense?

Maybe. I think, over the years, getting more comfortable improvising — I’ve had moments where I was able to write a joke onstage. Now that’s a regular part of the show. When I first started, I stuck with the jokes I had prepared, but that’s changed.

A long time ago, I discovered what a palindrome was. When I started trying to write palindromes, I was surprised that I was able to write a long palindrome. That was more of a nerdy, personal thing. …

But I don’t know if there are many definitive moments — it’s more of a process over time.

Now that you bring it up, I want to talk about palindromes. Specifically, the [500-word long] famous one you wrote for your book, “This Is a Book.” It was the longest palindrome of all time, is that correct?

When did you start writing palindromes?

It was in high school. I saw [one] in some puzzle book. What I like about palindromes is, it’s a simple constraint, it’s easy to understand, and it yields a difficult puzzle.

It’s something that has to read the same forwards and backwards, by letter, and that’s it. You have to make it into something long and coherent.

What do you think has changed the most over the years?

When I started doing standup, I just wanted to be a comedian. Once I got into it, and I started carrying a notebook all the time, putting ideas down, things started to evolve for me.

I started just wanting to do standup, [then] it became, ‘I’d love to write movies, or for TV,’ or, ‘It’d be cool if I could act.’ Eventually I tried to write books and do comedy in print.

I did a book of drawings a couple years ago [2013’s “Point Your Face at This,”], and I’m working on another one of those, and I like it because there are things I can do in the book that aren’t going to work onstage. Instead of having an audience of a thousand people, it’s an audience of just one person. And they can move through the book at their own pace and go out of order. You just hand people comedy in a stack of paper.

Why don’t you tell me about this new tour, “The Persistence of Jokes.” Is there a different angle you’re approaching the comedy with?

I’m simplifying. I’m going back to where I started. I realize that most of the stuff I’ve done on TV — drawings, animation, I played the piano — is fun experimenting [with].

But most of the standup I’ve done over the years has involved standing onstage and telling jokes, the most old-fashioned way you can do it. This [new] special is an hour of just jokes.

One thing that I also find fascinating is your process of writing a joke. Where do ideas come from for you?

Daydreaming is mostly where stuff comes from for me. Stuff just floats into my head.

Sometimes I’m more focused about it — especially if I’m getting ready for a special or a TV spot. Then I just sit down and say, ‘OK, write as many jokes as you can for 20 minutes.’

I like games and puzzles, so a lot of it is just a game to me. I remember one time just bringing a dictionary on a long flight and browsing through the dictionary seeing what kinds of ideas it triggered.

I don’t know if I got any good jokes out of it, but it was fun.

Is there any advice you’d give to a younger version of yourself, or any comedian starting out?

There’s a great quote — I think it’s by Flaubert — something like, ‘Be regular and orderly in your life, so you can be violent and original in your work.’

What I like about that idea is that over the years, I’ve learned to respect any original idea that came to me — to write it down, even if I thought it was stupid or embarrassing or useless.

When I look back, I can go through notebooks and find ideas and say, ‘That’s not funny, but it does trigger this now,’ and now I get a good joke out of it. Or, I see it with different eyes and say, ‘I see what I was trying to do there. That’s not a joke, but that’s a scene or a short story.’

Having my own library of ideas that I’ve accumulated has really enabled me to create a lot of content. If I’d judged the stuff too harshly when I was doing it, I would’ve missed out on a lot of ideas.