Dan Schlissel, founder of independent comedy label Stand Up! Records, is back and ready to work. 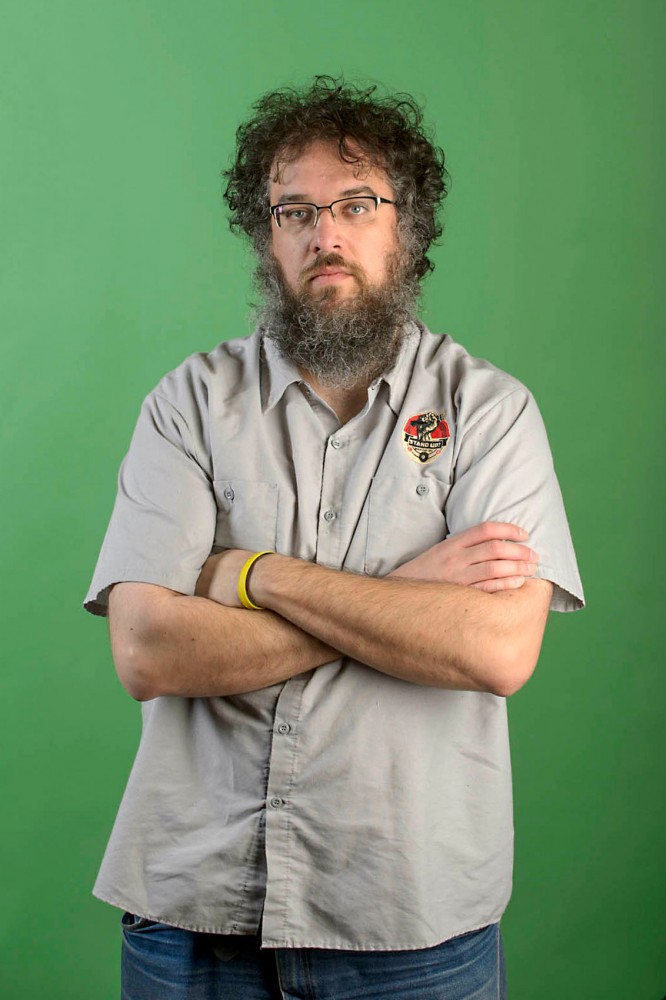 Dan Schlissel has a lot of stuff.

With more than 150 comedy album releases under the label, Schlissel estimates there are close to 150,000 records in his current space. His penchant for collecting physical products —especially vinyl — means Stand Up! is in the process of moving to a different space.

“I need a new move because I am always making new stuff,” Schlissel said. “When you are a record label, you are always trying to put out new things.”

The move is just one of many changes underway as Stand Up! Records continues to expand. Not even death, it seems, can stop Schlissel — though it’s tried.

This past year, Schlissel received surgery for ossification of the posterior longitudinal ligament, which is a narrowing of the spinal canal and compression of the cervical spinal cord. Four days after the surgery, Schlissel technically died in the hospital for three minutes.

Yet after taking a hiatus from the company, Schlissel is back to work.

“Having that bit of artistic antagonism in your spirit means you want to keep pushing,” Schlissel said.

Currently, Schlissel is developing a new website and digitalizing a market for albums and merchandise.

His career in the record industry kicked off decades ago. As a physics student at the University of Nebraska in the early ’90s, Schlissel started -ism recordings, an independent label for local bands, “literally in a dorm room.”

As a record store employee, a sitting member of the college arts council and a local music fan, Schlissel absorbed the industry’s ins and outs, including handling record distributors and working with up-and-coming bands.

“It was this unique triangular position of knowing all the different aspects of the business,” Schlissel said.

After moving to Minneapolis in 1998, Schlissel got his first taste of comedy at Acme Comedy Company to see Lewis Black, who was not yet a national celebrity.

“I went there specifically to try and do a record with him,” Schlissel said.

After landing the gig and working with Black, Schlissel transitioned to producing comedy, and Stand Up! Records was born. He said his background in “DIY punk rock atmosphere” translated seamlessly to the comedy industry, which was home to few independent labels at the time.

“Learning how to record bands really influenced how I record comedy,” Schlissel said. “I think comedy was mistreated in its audio qualities in the recording process … so I just applied everything I learned from the music side to make good, clean recordings of comedy that I hadn’t seen before.”

After working with a host of comedians, including Hannibal Buress, Maria Bamford and David Cross, Stand Up! Records remains one of the country’s most renowned independent comedy labels.

Most every comedian who has come out of the Twin Cities has worked with the label in some capacity.

“Since [the start], I have been establishing people as recording artists,” Schlissel said. “I just have a good eye for talent and finding people and making it happen.”

According to Schlissel, the label’s independence allows it to find upstart comedians.

“I don’t have to hit a certain sales quota in order to consider something a success,” Schlissel said. “You know it when you hear it.”

“Part of it is luck, and part of it is keeping my nose to the grindstone,” Schlissel said. “If I was just happy to be satisfied with what I had, I would have stopped a long time ago and patted myself on the back for whatever bogus credential.”

Still, he said, the record industry can be difficult to navigate.

Even as online platforms can help labels and comedians get material out there, he said streaming services such as Spotify effectively “devalue the content of an artist’s catalogue.”

“Digital is way easier, but I don’t find it to be that satisfying to buy data as a customer,” Schlissel said. “The best you can do is hope to offer value to the folks who are fans and who care about the comedy as an art form and want to support the artist.”

Notably, Stand Up! is starting to produce more video content in addition to records and even established its own Roku channel.

“If you are a producer and you want to keep challenging yourself, you have to keep reaching to new realms at some point,” Schlissel said. “I want to grow with what I do as an artist.”

Correction: A previous version of this article incorrectly stated the amount of time Schlissel died; it was three minutes.