After years of work, light rail connects the Twin Cities

An estimated 75,000 people rode the Green Line light rail on its opening weekend. 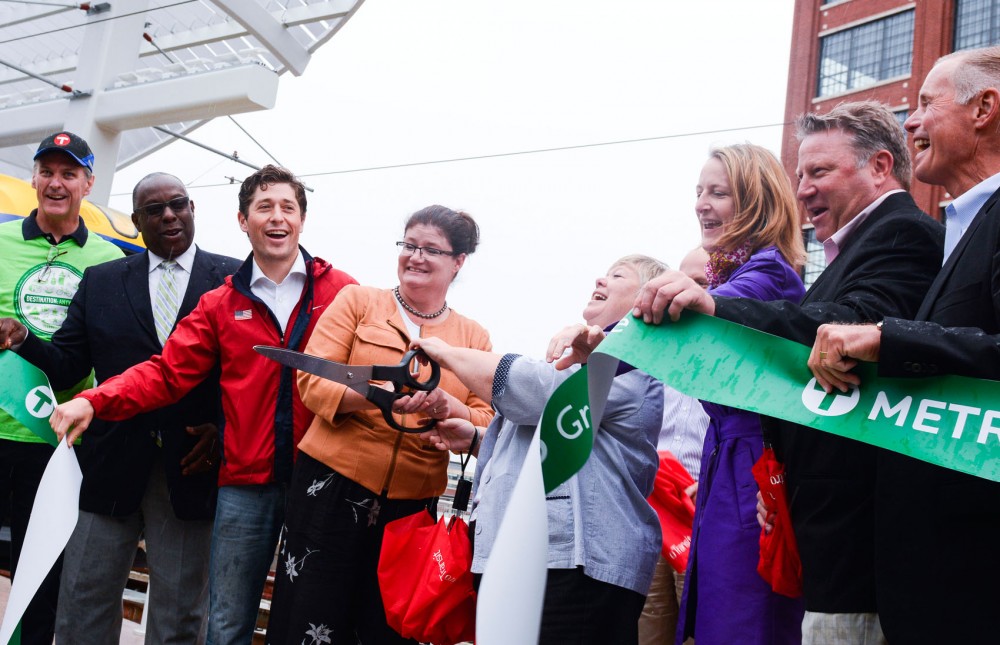 Metropolitan Council members Wendy Wulff and Linda Higgins cut the ceremonial ribbon for the grand opening of the Green Line at Target Field Station on Saturday.

Steady rain put a damper on festivities along the Green Line light rail’s grand opening on Saturday, but the poor weather didn’t stop more than 75,000 people from lining up to be first-time riders.

The launch — which state and city leaders say has been on Minnesotans’ minds for three decades — marked the end of nearly four years of construction on the city-to-city connection. First-time riders explored the new route, while local
politicians touted the project’s success.

Crowds explored the transit line and its 18 stops, celebrating the opening of the much-anticipated project that connects 11 miles between the Twin Cities.

“We know our future is stronger when we are together as the Twin Cities,” said Rep. Betty McCollum, D-Minn., at the Union Depot kickoff in St. Paul, one of two ribbon-cutting ceremonies for the light rail. The other was held at Target Field Station in downtown Minneapolis.

“This is about getting a transportation system that moves people to match the economy we’re walking into,” Klobuchar said.

Seven stations along the line — including the West Bank and Stadium Village stations near the University of Minnesota campus — held community events, though several cancelled due to the weather.

One minor incident occurred on the opening day, said Metro Transit spokesman John Siqveland. On Saturday afternoon, a woman’s vehicle got stuck after driving onto the tracks near the Capitol in St. Paul, Siqveland¬¬¬ said. Even though no one was injured, trains faced delays for about 30 minutes.

Emi Nguyen, a 2014 University graduate, said she plans to take advantage of the connection between the University and both downtowns.

“I just graduated and got a job in downtown. I live at the Station on Washington, so I’m really excited,” she said. “It’s really convenient.”

“It provides an excellent connection for students at the University to jobs downtown,” he said. “It makes it a lot easier to call ourselves the Twin Cities when we’re connected by a rail.”

Sue Haigh, chair of the Metropolitan Council addresses, a large crowd at the Union Depot Station in St. Paul.

“We know our future is stronger when we are together as the Twin Cities,” McCollum said.

St. Paul Mayor Chris Coleman addresses the Union Depot crowd, while on the other end of the Green Line, Ward 3 City Council Member Jacob Frey, who represents parts of the University of Minnesota area, speaks at Target Field Station.

“The light rail will benefit young professionals, Somali-American immigrants, and University students who now have an extraordinary connection to the central business district and to jobs,” Frey said.

Local artist Seitu Jones spoke on behalf of residents who live along the Green Line. She questioned how the transit line would affect people of color and low economic status.

Rain begins to fall in St. Paul as the ribbon-cutting ceremony starts.

The first train, which can hold up to 600 people, leaves from the St. Paul station.

“We’ve been waiting to be done with this for three years,” he said.

At the West Bank station celebration, Susannah Dodge, chair of the West Bank Business Association, paints hearts onto a large cardboard structure that is a part of a pop-up sculpture garden designed by local artist
Jon Reynolds.

Eunice Eckerly, a community member who has lived on the West Bank since 1971, said she remembers when streetcars originally connected Minneapolis and St. Paul.

“I was around when the first one went through,” she said.

Abdurahman Kadir, a recent graduate of the University of Minnesota-Duluth, and friends perform a traditional Oromo dance at the West Bank Station celebration.

Some vendors at the Stadium Village Station celebration begin packing up early due to the rain.