Coming off their first home loss, the Gophers host Northwestern. 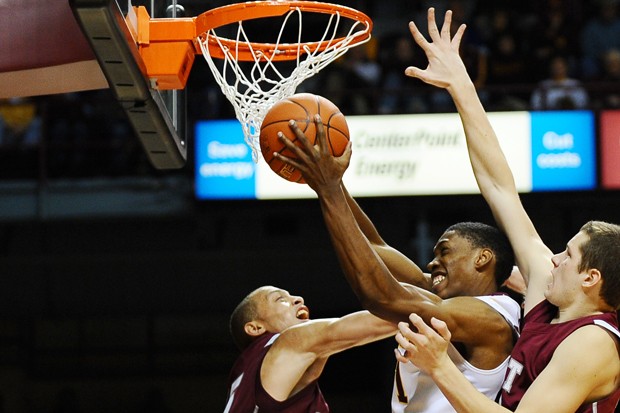 Gophers junior forward Paul Carter goes up for a shot against St. Joseph’s at Williams Arena earlier this season. Minnesota won its first 10 home games before falling Saturday to No. 6 Michigan State 65-64.

In the midst of its second three-game losing streak of the season, the Gophers menâÄôs basketball team has little trouble identifying its most-needed improvement: pulling out close games. As in an early-season skid against Portland, Texas A&M and Miami, Minnesota has dropped three straight (including two to now-No. 5 Michigan State) by a combined 11 points. Minnesota had a reasonable shot at winning each of those games in the final minutes. âÄúWeâÄôve been working on some late-game situations at practice,âÄù senior forward Damian Johnson said. âÄúWeâÄôve got to learn how to execute in those situations and weâÄôll be fine.âÄù The Gophers (12-7 overall, 3-4 Big Ten) have their first opportunity when they host Northwestern (14-5, 3-4) at 8 p.m. Tuesday at Williams Arena. The Wildcats are familiar with pressure late in games. They pushed Illinois to overtime on the road before losing their Big Ten opener. They earned their first conference win by overcoming a 17-point first-half deficit at Michigan on Jan. 10. They fought through a close second half to hand then-No. 6 Purdue its third-straight loss in a 72-64 home win on Jan. 16. After the win over Purdue, however, Northwestern fell flat in a road loss to Ohio State. The Wildcats sprang back with a come-from-behind home win against Illinois, but Wildcats coach Bill Carmody hopes that his team will carry more momentum from a win in TuesdayâÄôs game than it did following the win over Purdue. âÄúLast week it was a similar thing,âÄù Carmody said. âÄúYou donâÄôt want it to end the same way as it did last week.âÄù The Gophers, on the other hand, want to heal the pain of a blown 13-point second-half lead and eventual 1-point loss to Michigan State on Saturday. Gophers coach Tubby Smith said Monday that his team has been in good spirits. âÄúLook at the stats [against Michigan State], and we played pretty well once again,âÄù Smith said. âÄúWeâÄôve been improving; itâÄôs just stretches, just like that four or five-minute stretch where we did a poor job.âÄù Smith said fatigue could have been a factor. His team allowed a 13-2 run after holding a 60-52 lead against the Spartans. All three of the GophersâÄô starting guards played 36 minutes (more than 10 minutes over their season averages) Saturday. Johnson leads the Gophers with 25.4 minutes per game, an average that is less than four Wildcats who have started every game this season. Northwestern has three players who have averaged at least 33 minutes per game, led by point guard Michael ThompsonâÄôs 37.5-minute average. Thompson is fourth in the Big Ten with 4.2 assists per game, and he is NorthwesternâÄôs second-leading scorer, averaging 13.4 points per game. Thompson will be the second-straight challenge for Gophers sophomore Devoe Joseph. On Saturday, Joseph saw Michigan StateâÄôs Kalin Lucas score 22 points, including a go-ahead 3-pointer with 1:27 remaining. Defense was a concern for Joseph when he stepped into the starting point guard role after junior Al Nolen was ruled academically ineligible last week. âÄú[Thompson is] going to be looking to score,âÄù Joseph said. âÄú[IâÄôll need to be] sticking close to the guys who are going to be scoring and just locking them up.âÄù Northwestern leads the Big Ten in 3-point field goals, averaging nine per game. The Wildcats are second to Minnesota in 3-point field-goal percentage in Big Ten games. âÄúWe know [Northwestern is] very capable of beating us here,âÄù Smith said. âÄúTheyâÄôre a team that can make you look bad if youâÄôre not disciplined and in your proper position, playing defense the right way.âÄù If TuesdayâÄôs game is close in the final minutes, the Gophers will be used to it. Six of the teamâÄôs seven losses have been by seven points or fewer. Johnson said that doesnâÄôt necessarily mean the Gophers will be better or worse in similar situations the rest of the season. âÄúIt could work both ways: It could affect the team where they feel like every time theyâÄôre in that situation, âÄòOh, there it goes again, and weâÄôre going to mess up,âÄô Johnson said. âÄúBut I think our teamâÄôs going to handle it right now. Coach Smith has been really focused on giving us confidence to be able to handle the end of the game.âÄù