Minnesota will take on the Big 12's Iowa State in Tempe. 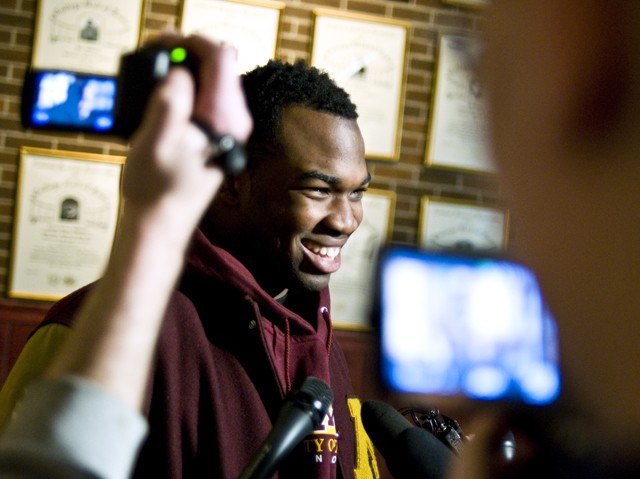 Having just learned of MinnesotaâÄôs bowl fate, senior Nick Tow-Arnett stood in the Gibson-Nagurski Football Complex discussing what will be his third trip to the Insight Bowl in four years. This time the Gophers (6-6 overall, 3-5 Big Ten) will play Iowa State (6-6 overall, 3-5 Big 12) on New YearâÄôs Eve. A year ago they lost to Kansas 42-21 at Sun Devil Stadium. In 2006, Texas Tech mounted a 31-point comeback in Tempe, Ariz., and eventually won in overtime, 44-41. This being his final chance at a bowl win, Tow-Arnett was asked whether the third time would be the charm. He chuckled a bit. âÄúThatâÄôs a good way to put it,âÄù the tight end said. âÄúThird timeâÄôs a charm, I like that.âÄù If thereâÄôs any monotony setting in, Tow-Arnett and his fellow seniors didnâÄôt hint at it Sunday evening. Middle linebacker Lee Campbell talked at length about the hospitality at the Insight Bowl and outside linebacker Simoni Lawrence warned the Cyclones about how much fun theyâÄôll have. The Gophers werenâÄôt going to debate whether they deserved to be selected for the Alamo Bowl over a 6-6 Michigan State team that it beat 42-34 on Halloween with thoughts of warm Tempe weather. âÄúItâÄôs one place you definitely donâÄôt mind going again,âÄù Tow-Arnett said. Of course, thereâÄôs also a game to be played, and itâÄôs fair to say that Minnesota slipped behind the Spartans in the bowl pecking order despite identical records and the head-to-head edge at least partly because of its underwhelming final weeks of the regular season. Following the win over Michigan State, which moved them within a game of bowl eligibility, the Gophers lost to Illinois, a team that finished the season 3-9, escaped with a 16-13 win over Football Championship Series opponent South Dakota State and lost 12-0 to Iowa in the season finale. They failed to score an offensive touchdown in the final two games. âÄúIf we wanted a better bowl game, we should have won more games,âÄù senior defensive tackle Eric Small said but added that heâÄôs never going to complain about making the postseason. While this yearâÄôs ending may be better than the four-game skid that closed out the 2008 regular season, MinnesotaâÄôs 2-2 finish was thoroughly frustrating, especially for the offense. Inconsistent all season, it imploded against the Jackrabbits and Hawkeyes, leading many to wonder whether the 42-point outburst against the Spartans was a fluke. âÄúWe definitely donâÄôt want to come across as lucky,âÄù Tow-Arnett said. âÄúI think we can have another game like that; things were just clicking so well that game. We just have to get back on that path and start off fast like we did.âÄù Against Iowa StateâÄôs 99th-ranked total defense, the Gophers certainly have a shot to do just that, but the Cyclones will undoubtedly be a hungry team having rebounded from a 2-10 season in 2008 to become bowl eligible this year. ItâÄôs a turnaround Minnesota can relate to; the Gophers were 1-11 in 2007 and 7-6 in 2008. âÄúTheyâÄôre going to be excited, and theyâÄôre going to be amped up âÄî just how we were last year,âÄù Campbell said.