Dick Jonckowski is one of only two PA announcers in Gophers history. 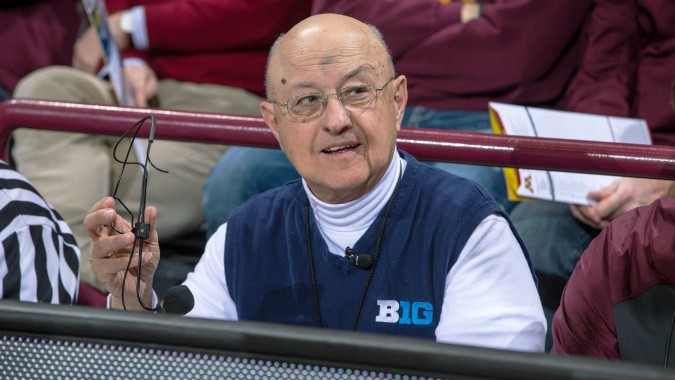 Dick Jonckowski unassumingly sat down in his chair just below the elevated floor of Williams Arena, with a smile on his face.

Jonckowski acted as if the Minnesota-Nebraska game was like any other matchup he announced for Gophers basketball.

But this game was different — it was his last.

“He’s a legend,” said head coach Richard Pitino. “He’s a staple of Minnesota basketball, so it was good that we could get him out with a win.”

Jonckowski was an emcee at funding events for the University of Minnesota before he worked as a public address announcer for the team. He graduated from Brown Institute in 1964, where he studied broadcasting.

Jonckowski came home in the late 1960s and worked in public relations for the Minnesota Muskies, a team in the now defunct American Basketball Association.

The Muskies left Minnesota and Jonckowski was out of a job, so he decided to work at a car dealership where he got his renowned nickname, “the Polish Eagle.”

“I went to see [the dealership’s] general manager and he said ‘Dick, just to let you know, all our salesmen have nicknames,’” Jonckowski said. “He said to me ‘You’re Polish, who are some of your favorite teams?’ … As soon as I said Philadelphia Eagles, he said, ‘We’ll call you the Polish Eagle.’”

Former announcer Julius “Jules” Perlt is the only other voice of Gophers basketball besides Jonckowski.

The two have called men’s basketball games for a combined 89 years, with Perlt announcing until 1986.

In Jonckowski’s last season with men’s basketball, Minnesota has won 23 games as of Sunday afternoon after winning just eight games a season ago.

“It’s been really amazing,” Jonckowski said. “A lot of close games, eight down to the wire, overtime games. I’ve never called so many overtime games in one year.”

“Our relationship has grown considerably,” Anderson said. “His work with our baseball program, his love of baseball. He’s always had a great passion for the game.”

Besides calling games, Jonckowski works events as an emcee and guest speaker.

He said he makes most of his living from public speaking.

“I can mix it up with humor and sports,” Jonckowski said. “I do corporate events, I do halftime banquets, just about anything you can think of, so I think I’ll stay busy [after basketball].”

Jonckowski was diagnosed with diabetes and cancer within the span of a month in 2014. Jonckowski beat stage 4 non-Hodgkin’s lymphoma.

“We both struggled through that and we both shed a few tears,” said Arlene Jonckowski, Dick’s wife. “Trying to care for him and get him through that crisis … It was a challenge for both of us.”

Jonckowski waved goodbye to fans who stayed around to see the legendary announcer one last time.

One day after the game, Jonckowski said that he couldn’t believe that so many people stayed to see him go.

Pitino said he also saw the legendary announcer, and came up to him as he was walking off after the game.