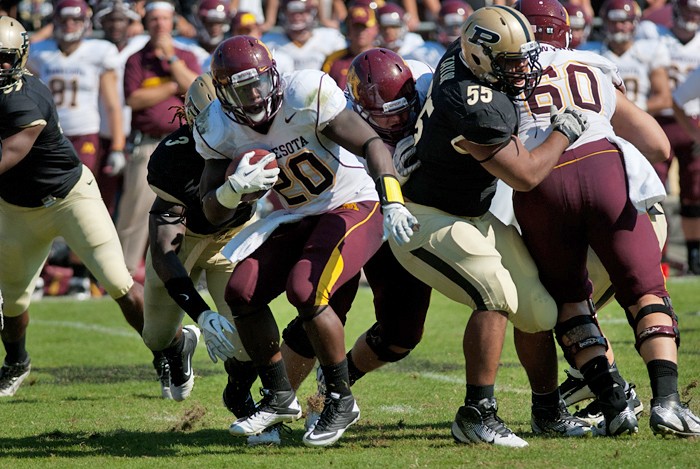 The Gophers managed to avoid a second straight shutout at Purdue, but the ineptitude continued in a 45-17 lopsided loss.

The Boilermakers’ victory over Minnesota (1-5) pulled Purdue (3-2) within a win of evening the all-time series.

After PurdueâÄôs first score, the outcome was never in doubt. Purdue quarterbacks Caleb TerBush and Robert Marve were efficient in running the offense while splitting time and the Boilermakers ground game was dominant.

Junior running back Akeem Shavers led a group of Purdue ball carriers that combined for 216 yards and three touchdowns.

The Boilermakers took advantage of three early Gophers turnovers to jump out to a 31-0 lead. Chris Hawthorne’s 47-yard field goal late in the second quarter was Minnesota’s first score in more than six quarters.

True freshman Max Shortell made his second consecutive start at quarterback for Minnesota, but was benched at the beginning of the second quarter in favor of a hobbled MarQueis Gray.

Gray, who sat out last weekend’s contest with a toe injury, completed just 8-of-20 passes for 104 yards and had his second throw of the day intercepted and returned for a touchdown.

Minnesota is off next weekend, and will host Nebraska for homecoming on Oct. 22.