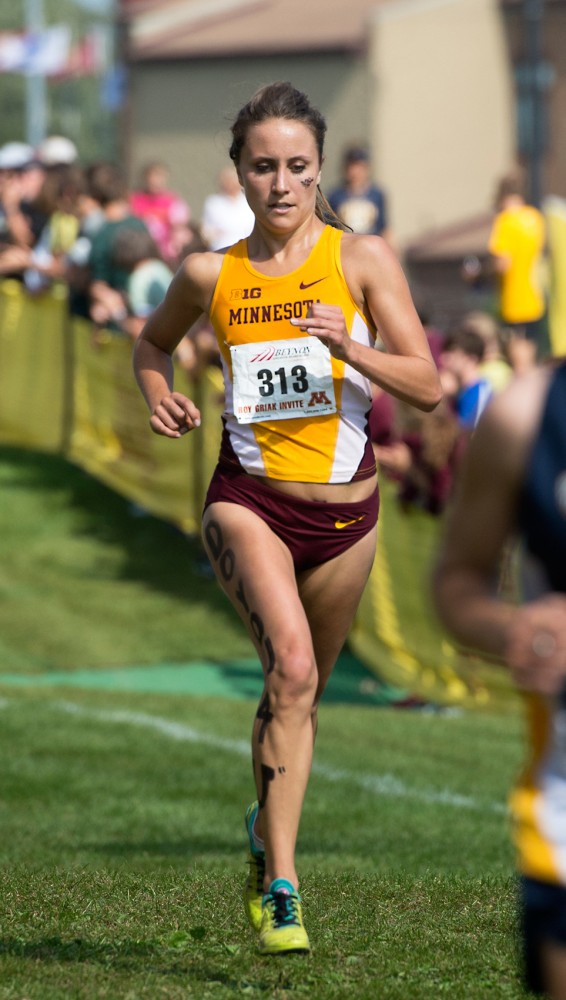 Junior Haley Johnson runs the final stretch of the Roy Griak Invitational at Les Bolstad on Saturday. Johnson placed twelfth as an individual and the women's team placed third overall.

by Tommy Jaakola
The women’s cross country team came into the 2015 Griak Invitational planning to finish in the top three, and they succeeded.
The Gophers finished in third place behind Michigan State and Boise State, their best finish in three years.
“I feel really excited about third; it’s a podium finish, and we get to bring home a trophy, which is great. We haven’t done that for awhile,” head coach Sarah Hopkins said. “We beat some really good teams. We were really close to Michigan State, closer than I thought we would be.”
It was the Gopher’s best Griak finish since 2012, when they also placed third. The team also had all five of their scoring runners place in the top 50 individually.
Minnesota was led by captain Haley Johnson, who improved upon her 66th place finish a year ago by running a time of 21:54 and finishing 12th place overall. Liz Berkholtz placed 18th for the Gophers and ran a time of 22:07.
“Haley Johnson was our number-one runner today, and it was great to see a top-20 finish for her,” Hopkins said. “She’s been a long time coming. She’s had a lot of talent but hasn’t quite had that race where it has all come together. Today was that day for her.”
Johnson and Berkholtz led the Gophers for the majority of the race on Saturday as they fought for a top-three team finish.
“My number-one goal was just to get a head start,” Johnson said. “Last year I came in at the [one kilometer mark] in 120th, so I wanted to be in at least the top 50 in the first
kilometer to get myself in a position to move. I did that, and I worked really well with a couple of teammates along the way.”
Johnson said she thought the Gophers looked like a top-16 team in the nation after their performance.
“We’re going to come out of this with a lot of confidence; that’s the most important thing,” Hopkins said.
Men finish fifth
Obsa Ali stole the show for the men’s cross country team, running a 25:20.5 10-kilometers and taking 15th place for the Gophers.
Redshirt seniors Adam Zutz and Aaron Bartnik also provided solid performances, finishing in 17th and 21th places respectively. The team overall finished in fifth place, while Michigan State took home the men’s team title.
The race began to intensify after the first five kilometers, as the top runners were running in a tight pack for much of the first half of the race. Ali said his game plan was to stick behind his older and more experienced teammates Zutz and Bartnik.
“I think we did a great job of packing up [in a group],” Ali said. “That was my goal.”
In the second half of the race, Ali began gaining ground on the hills of the course to eventually pull into the top 20.
Ali, after running the fastest time ever for a Minnesota runner at the Oz Memorial two weeks ago, said he wasn’t bothered by the mildly hot weather and felt very comfortable
during the race.
As he pulled towards the finish line, Ali began to think of the meet’s namesake, former Minnesota coach Roy Griak, who died over the summer.
“I felt good in the first [five kilometers],” Ali said. “Then after the hill [at five kilometers], which is really tough, I was just like, ‘Roy Griak, Roy Griak, this is for him; this is for Roy Griak.’ I had Roy Griak in mind [for] every single hill I was hitting; it was for Roy Griak.”
Delete Image
Align Left
Align Center
Align Right
Align Left
Align Center
Delete Heading