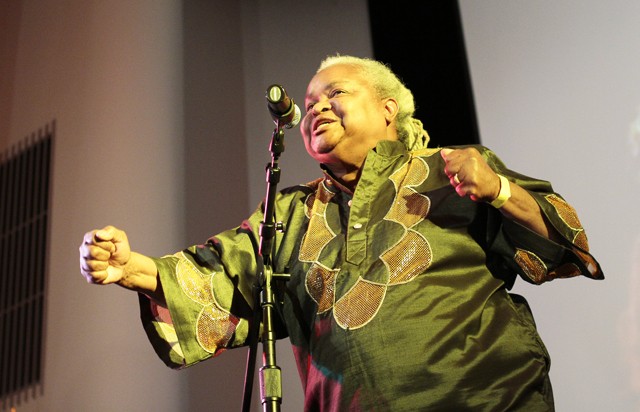 A group of students dressed as African Zulu warriors with shields, spears and body paint stepped up to the stage Saturday night for a performance that drew cheers from the 800-person crowd in Coffman UnionâÄôs Great Hall. Shortly before that, wearing traditional jewelry and body paint, African Student Association member and child psychology junior Anne AmooâÄôs group performed a Pan-African dance that incorporated different moves from the different regions of Africa. These were two of many groups from all over the state that came together to celebrate the diverse countries of Africa and to represent the different cultures through poetry, dance and fashion at ASAâÄôs African Night 2010. More than 800 lively students, alumni and community members packed the Great Hall to watch groups sing, perform dances and recite spoken word pieces in celebration of African culture. The theme of the evening was âÄúBack to Our Roots,âÄù and aside from celebrating, tribute was paid to places that are still struggling with issues like poverty and violence. âÄúWe will keep Sudan in our hearts,âÄù University of Minnesota alumnus Olufemi Kolawole said to the crowd. âÄúIt keeps us grounded,âÄù fellow dancer and University first-year Yanmife Salako said. African Night has been a 12-year tradition at the University, and anyone wishing to represent their African heritage can perform at the event, ASA social chairwoman Uzo Obi said. Groups from across the greater Twin Cities area and from as far as St. Cloud and Mankato came to play. âÄúEveryone has their own subculture,âÄù Kolawole said. âÄúThis night gives the [small number] of black students on campus the chance to come together and celebrate what we left behind and to use this as an opportunity to learn from other cultures.âÄù A âÄúSounds of AfricaâÄù band kick-started the night, which featured various spoken word pieces, cultural dances and two fashion shows. Salako, Amoo and the other girls in the group spent about a month preparing their dance for ASAâÄôs African Night. Hashim Osman, a first-year at Century College, performed a traditional Somali dance known as Dhaanto with his group. Together they have been practicing for three weeks to fine-tune their steps. âÄúWhen we get together there is always a lot of emotion,âÄù Osman said. The energy in the room spiked when girls strutted down the aisles and across the stage during the two fashion shows of the evening. Sina Yi, a 21-year-old local aspiring clothing designer and student at the Art Institutes International Minnesota, showed her pieces for the first time at the event. She said her pieces fuse her âÄúfun, sexy and chic aestheticâÄù with her African inspiration. The evening concluded with African food and an after-party at the Blue Nile Restaurant and Lounge in Minneapolis. âÄúASA tries to bring everyone together for one night,âÄù Amoo said. âÄúSometimes we find ourselves lost in contemporary U.S. society, but this night brings us back to our roots.âÄù