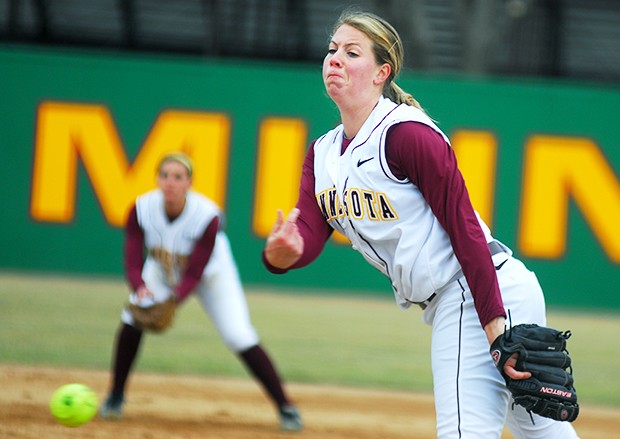 Losing two 1-0 games to No. 17 Ohio State on Saturday was probably difficult enough for Minnesota to take, but things actually could have ended up a lot worse. With two outs in the top of the fourth inning, the outcome of the game quickly became the least of the Gophers priorities. On a deep drive off the bat of Ohio State junior Leah Ledford, Minnesota center fielder Dannie Skrove and right fielder Aubrey Davis both raced toward the right-center field gap. As the ball tailed toward the ground, Skrove and Davis did not see the other player coming toward them and both dove for the ball. The two outfielders were quickly stopped in their tracks after a brutal collision, while Davis somehow managed to hang on to the ball for the third out of the inning. The home crowd immediately went silent as both players remained on the ground. With teammates, coaches and fans huddling around the two players, Davis eventually rose to her feet as Skrove stayed still. Minutes later an ambulance came with a stretcher to pick up the freshman center fielder from Zimmerman, Minn. After a 20-minute delay, Skrove was carted off the field and was held overnight for observation. âÄúYou never want to see an injury like that,âÄù Gophers co-head coach Lisa Bernstein said. âÄúIt really could have been much more horrific than it ended up being, and weâÄôre glad that both players seem to be doing OK.âÄù While sound eventually came back to the stadium and replacements came in for Davis and Skrove, MinnesotaâÄôs offense stayed as quiet as the crowd once was. Sophomore first baseman Malisa Barnes picked up the Gophers first hit of the game in the bottom of the fourth with a single up the middle, but that was the only hit MinnesotaâÄôs offense could compile in the first game. âÄúWe had four kids in spots they hadnâÄôt played all season, and I think they played very well given those circumstances,âÄù Bernstein said. Barnes finished the day 2-for-4 in the two games, stretching her career-long hitting streak to 10 games. While Gophers senior pitcher Briana Hassett put together another stellar outing âÄî holding Ohio State scoreless for six innings âÄî two hits in the bottom of the seventh inning were enough for the Buckeyes to pull out a 1-0 win. âÄúBriana did an excellent job today,âÄù Bernstein said. âÄúI thought she was phenomenal today, and we played great defense behind her despite having to make several adjustments to our lineup.âÄù Ohio State picked up six total hits in the first game, three by its No. 9 hitter Dee Dee Hillman. Hassett (19-14) mowed down 18 Buckeyes batters combined in the cold conditions Saturday, but Ohio StateâÄôs pitchers may have been even better. In the first game Kim Reeder (14-3) picked up the win with nine strikeouts and Lindsay Bodeker (10-3) fanned 13 Gophers batters in the second game and gave up just two hits for her win. âÄúWe just didnâÄôt get it done today on offense, but we were facing two incredibly talented pitchers, and thatâÄôs why Ohio State is nationally ranked right now,âÄù Bernstein said. âÄúI think it was just great Big Ten softball today, and they were competitive games down to every pitch, and one swing of the stick could have resulted in the game going in a different direction.âÄù