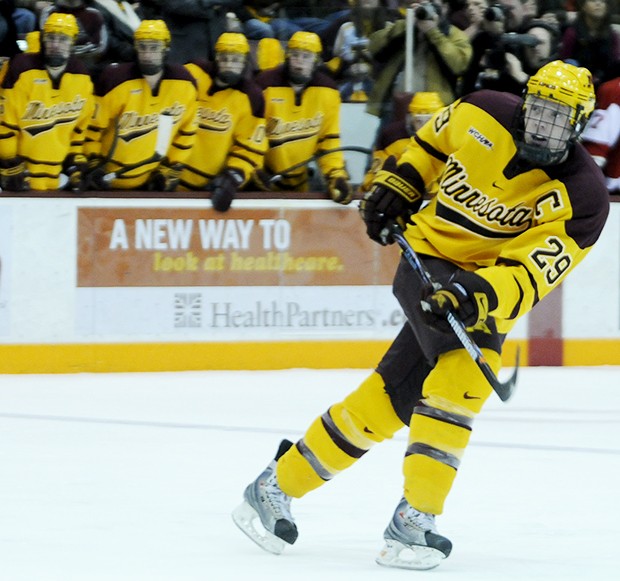 A year after missing nearly his entire junior season, Ryan Stoa returned to the ice to lead Minnesota and the WCHA in points.

A year after missing nearly his entire junior season with a knee injury, Ryan Stoa made up for lost playing time this year. The Minnesota menâÄôs hockey team captain was named the Western Collegiate Hockey Association Scoring Champion earlier this week after tallying 36 points in conference games. âÄúIt kind of snuck up on me I guess,âÄù Stoa, who used three goals last weekend to edge out fellow first-liner Jordan Schroeder for the title. The Colorado Avalanche prospect is the first Gophers skater to lead the league in scoring since Reggie Berg did it in 1998. Stoa also led the WCHA with 19 goals, but he gave some of the credit to the guys heâÄôs been skating with for most of the season. With Stoa and junior Jay Barriball around him, SchroederâÄôs 22 assists were tied for most in the WCHA this year and his 35 conference points were second only to Stoa. âÄúEverything works through [Schroeder],âÄù Stoa said, adding that opponents give him opportunities by focusing on the freshman center. âÄúBarriball compliments us both very well. TheyâÄôre both quick, they get to pucks and theyâÄôre really smart players.âÄù Eaves on the standings In his weekly press conference, Wisconsin coach Mike Eaves put the conferenceâÄôs playoff situation into terms Rick Tocchet would understand. âÄúYou got to be almost a little bit off-center if you were to go to Vegas and bet on these series this upcoming weekend because I donâÄôt know who youâÄôd bet on,âÄù Eaves said in a press conference Monday. âÄúThe parity level has never been this high, and I donâÄôt think it would be a smart thing to do to go bet on any of these series.âÄù Starting with third-ranked WisconsinâÄôs 31 points and ending with eighth-seeded Minnesota StateâÄôs 26, six WCHA teams are separated by a mere six points. With the first round of the WCHA playoffs beginning this weekend, Eaves told reporters heâÄôs never seen the conference so even. Bostrom, Marvin set for skills challenge Minnesota seniors Justin Bostrom and Gigi Marvin are set to participate in the NCAA Frozen Four Skills Challenge on April 10 in Washington, D.C. In an East vs. West battle that tests competitors in six categories âÄî fastest skater, puck control, rapid fire, hardest shot, accuracy and penalty shot âÄî Marvin and Bostrom will compete for the West team. The consensus around Mariucci Arena is that Bostrom will be most likely to win the fastest skater competition. Bostrom is one of three WCHA players in the event along with MacGregor Sharp of Minnesota-Duluth and Chad Rau of Colorado College. Marvin will be joined by three other skaters from the womenâÄôs division: Angie Kesely of Wisconsin, St. Cloud StateâÄôs Megan McCarthy and Minnesota-DuluthâÄôs Sara OâÄôToole. Players on teams that advance to the Frozen Four will be replaced in the skills competition. âÄúIâÄôm sure it will be a fun experience,âÄù Bostrom said. âÄúBut hopefully, [the team] will be there and we wonâÄôt have to worry about it.âÄù