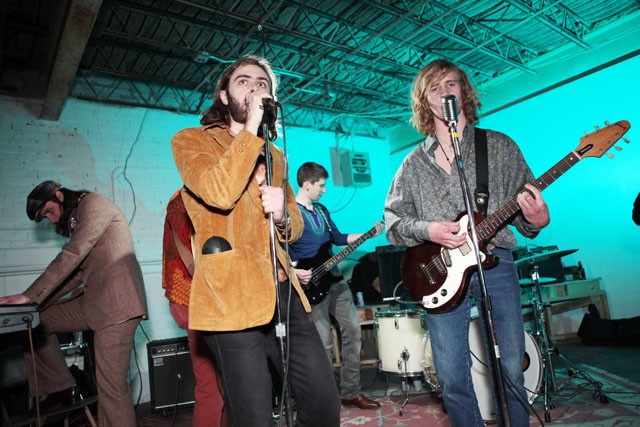 Would a band by any other name still sound as sweet? Four local bands answer âÄúyes,âÄù âÄúno,âÄù and âÄúmaybeâÄù to the age-old question of whatâÄôs in a name, and whatâÄôs so pun about them.

The Story: The cleverness of The van GobotsâÄô name has been debated in the press before. It has been published on lists of the best band names, as in the 2009 issue of the A.V. Club, and likewise among the worst, like on Smosh.com. In actuality, the history of the name goes further back than the band. ItâÄôs originally a reference from the cartoon âÄúFuturama,âÄù when a character notes that his favorite artist is Vincent van Gobot. âÄúChallenge of the GoBotsâÄú is also the name of a popular âÄò80s childrenâÄôs cartoon spin-off of âÄúThe Transformers.âÄù In all, the name is a loving tribute to nerds everywhere.

The Schtick:The van GobotsâÄô music is focused on their brand of post-punk revival, but thereâÄôs nothing in their performance that extends the pun beyond a name. âÄúWeâÄôre in to making music for fun âÄ¦ We like puns, and we like to joke around,âÄù Bassist Matt Kojetin said.

The Story: The Flying Dorito Brothers is a band born out of Gram Parsons fandom and almost exclusively plays covers of The Flying Burrito BrothersâÄô 1969 album âÄúThe Gilded Palace of Sin.âÄù Bassist Micky Alfano originally came up with the name, an homage to both the band and the tortilla chip that band members always have on hand. Drummer Sky Audsley highlighted the laid back approach of âÄúDorito BrothersâÄù to their prescribed musical repertoire. âÄúItâÄôs not a tribute band where weâÄôre trying to sound exactly like the band. WeâÄôre just trying to sound like big fans of the band attempting our best to play the music for people who havenâÄôt heard it before,âÄù Audsley said.

The Schtick: Where the Flying Dorito Brothers may fail to dazzle when it comes to their story and limited oeuvre, they make up for in a performance concept that stays true to their name. âÄúWeâÄôre hoping to sell Doritos as our merch and perhaps even autograph each individual chip for any fan that might want to do that,âÄù Audsley said.

The Story: Guitarist and vocalist Aaron Baum said Mr. Hide was born a year ago when he and a couple of friends wanted to start a band that could serve as a platform from which to play classic, though obscure, ditties from rock-music past. âÄúWe had just been spitballing ideas and trying to think of a name that gave a feel for garage psychedelic rock but not be a âÄòtheâÄô band,âÄù Baum said. A friend suggested calling the band âÄúMr. Hyde,âÄù after Robert Louis StevensonâÄòs novella, âÄúDr. Jekyll and Mr. Hyde,âÄù about a man of two very different natures, but Baum saw an opportunity to give the name that extra something. âÄúBand names are not really my fortÃ© in the first place âÄ¦ but I said âÄòWait a minute. What about Mr. Hide?âÄôâÄù****

The Schtick: Initially conceived as a cover band, Mr. Hide does not harken back to their literary forefather by crafting some kind of dualistic musical style but are more interested in performing solid, back-to-basics rock, as featured in âÄúNuggets,âÄù a renowned compilation of obscure garage-rock singles. ItâÄôs music that Baum called âÄúnot dark, but not too bubble-gummy.âÄù They intend to eventually move into original compositions but donâÄôt have any live shows coming up any time soon. Their relatively unknown status as a band could also be interpreted as a gesture that suggests an homage to their name.

The Story: The seeds of P.B. & the Jam were planted when bassist and vocalist Chris Hunnicutt and a few friends played as an open-house jam band at Downtime Bar & Grill in Dinkytown. Over a long period of time, the current members came together like the many elements necessary to produce a sedimentary rock. Since then, the question of whether their reputation precedes them has been settled. âÄúA guy in the band wanted to change [the name] because he thought it would categorize us as a jam band, which it hasnâÄôt done, so it hasnâÄôt been a deterrant,âÄù Hunnicut said.

The Schtick: Hunnicut emphasizes that despite their name, P.B. & the Jam is not, in fact, a jam band but more of a sprawl across a few genres. âÄúI donâÄôt want to be confused with the jam-band type idea. We do, however, jam moreso than the jazz since we are a jazz-motivated band. We have deeply rooted âÄò70s funk-jazz fusion âÄ¦ bringing back the old school to a new school generation, basically.âÄù