Ahanmisi shines late in his career

Maverick Ahanmisi has found a niche as a strong player off the bench. 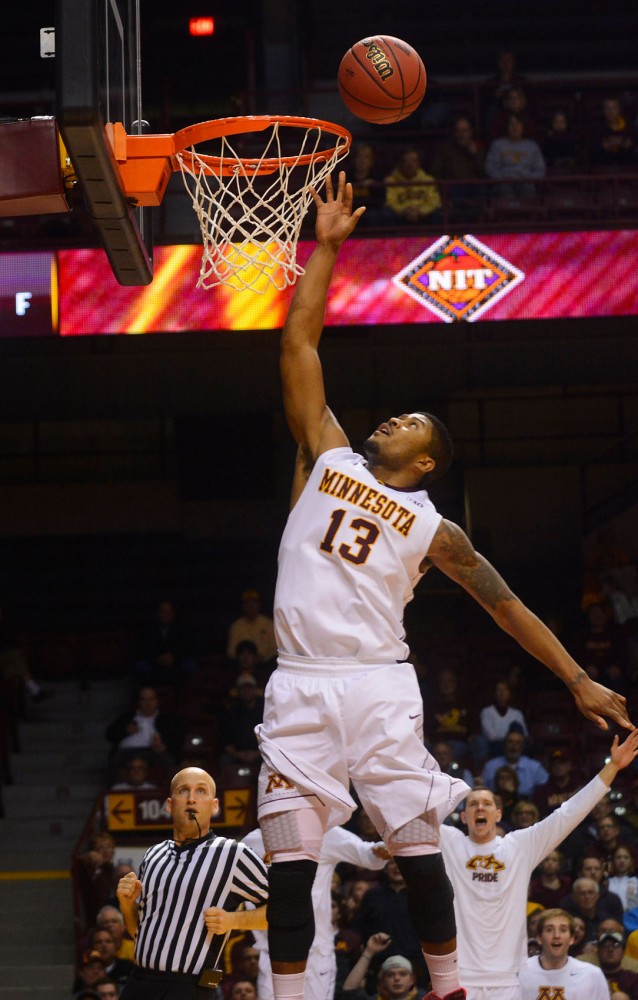 Emily Dunker for The Minnesota Daily

It’s an all-too-familiar scene this time of year — seniors’ faces flood with tears as their teams fall in the postseason and their college careers end.

Gophers senior guard Maverick Ahanmisi wants to push that moment as far into the future as possible.

His play in March has made that clear.

Ahanmisi has averaged a shade less than 10 points on 50 percent shooting over his team’s last five contests.

He scored a career-high 21 points in the Gophers’ 88-81 win over High Point in the first round of the NIT on March 18.

Ahanmisi came to the Gophers on a scholarship out of St. Clarita, Calif.

He was thrust into the starting point guard role for five games during his first year when senior guard Al Nolen was lost for the year with a broken foot. He then started seven games as a sophomore.

This year, with senior guard Malik Smith transferring in from Florida International, Ahanmisi’s minutes went out the window.

Still, he remained silent and kept working, never letting out a pip of a complaint.

“He’s handled it as classy as any kid could,” Pitino said. “He understood the big picture.”

After Ahanmisi played well, scoring 13 points in the Gophers’ win over Penn State on senior day, Pitino said he wished he would have given the guard more minutes throughout the year.

Ahanmisi has played more down the stretch, and those minutes have been earned, not given. And finally, at the end of his career, he’s found a consistent spot in the Gophers rotation.

“Mav has put himself in a position to where he’s the backup two, so he’s going to play minutes at that,” Pitino said. “I wanted to find him more minutes. He’s found a way to get it.”

Minnesota has needed his production, too.

The Gophers didn’t shoot out of the gate against High Point, and Ahanmisi carried them in the scoring department.

Ahanmisi said he has hopes of playing professionally when his collegiate career comes to an end.

He said he hopes that the confidence he’s gained from this recent stretch will carry over in his attempt to make it at the next level — likely overseas.

“It always helps when someone’s playing well,” Ahanmisi said. “I feel like I’m playing well right now with confidence, so hopefully that transpires onto my future.”

That future could start Tuesday night if the Gophers fall to Southern Miss, but Minnesota isn’t planning for that. If the Gophers do lose, Ahanmisi wants it to be at Madison Square Garden — the home of the NIT semifinals and final.

“For us seniors, we don’t want to end with a loss here at the Barn,” Ahanmisi said. “It would be big for us just to keep playing and win the whole thing.”

Wherever the run comes to an end, it’s been quite the whirlwind of an experience for Ahanmisi. He said he’s trying to enjoy every last second.

“I’d just describe it as a roller coaster,” he said. “I had a lot of ups and downs, but I’ve enjoyed it.